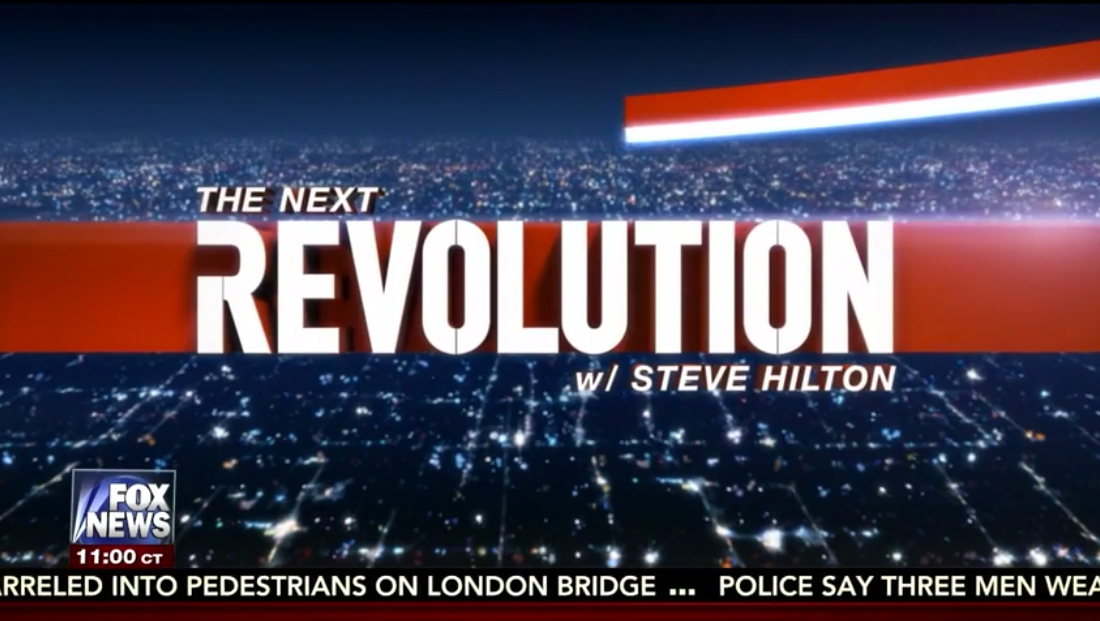 Fox News Channel debuted a new Sunday night offering, “The Next Revolution,” from its new Los Angeles studio, complete with a look that combines hybrid custom typography, weaving ribbons and a virtual plain of streetlights.

The show, which is meant to focus on the populist movement in the United States and across the globe, originates from Los Angeles and is hosted by Steve Hilton, the former director of strategy for the prime minister of the United Kingdom and entrepreneur.

The show’s logo features small vertical lines in the “R” and “O”s that give it a stencil-esque look. The “R,” meanwhile, is further customized with the removal of a segment on the upper left side.

The show open, which features Hilton on camera and via voiceover explaining his story and the concept of the show,  also incorporates weaving animated ribbons along with additional matching typography elements. Another design motif that frequently appeared was a blue toned nightscape of streetlight grids — presumably inspired by Los Angeles.

Unfortunately, the debut episode of the show’s lineup was changed to focus on the terror attack in London, a topic that hit home with Hilton, who is from England and lived in London for a period. The show’s set, meanwhile, which NewscastStudio previewed last week, featured Hilton in one corner with a cityscape backdrop behind him, while his panelists sat camera left. The on set monitor in this area featured a series of red interweaving ribbons with the show’s logo. Fox News to debut L.A. studio with ‘The Next Revolution’

The show also mixed in angled spotlight-shaped elements as part of its OTS layout. Hilton’s somewhat somber opening was made a bit awkward by host Jesse Watters, who hosts in the timeslot just before Hilton, attempted to give him a “bro” toss — only to be cut off by master control.