‘Fear(less)’ showcases the power of conversation 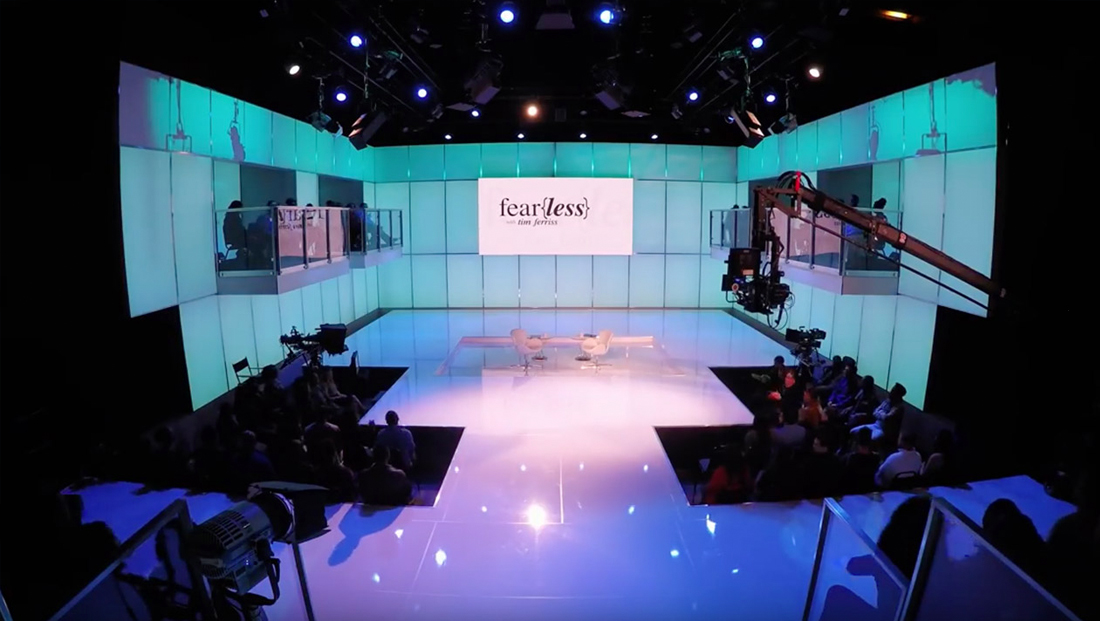 When creating the set for bestselling author, entrepreneur and investor Tim Ferriss’ “Fear(less),” the designers were tasked with creating a progressive and modern look that still allowed conversation and ideas to flow between the host, guests and studio audience — as well as the viewing audience.

The result of this strategic design is a modern look that combines the modern aesthetic of an Apple Store, the intimacy of a small theatre-in-the-round and colorfulness of Ferriss’ personality.

“The set was envisioned as a modern Ted Talk environment — showcasing the talent of Ferriss,” said designer Jeff Hall, whose JHD Group created the set for the show, which airs on AT&T’s Audience Network. View of the set from JHD Group.

The set’s main venue is a seated interview area that, thanks to being sunken into the riser in the middle of the stage-like open space, has the illusion of being a smaller, more defined space for discussion.

The studio audience is drawn into the interview thanks to “pits” on either side of the stage as well as from four glass-fronted balconies that, opera box-style, give audience members a unique view of the host and discussion.

By blending the sunken area in the middle of a shiny stage and bringing the audience closer to the host and guest, the design visually and physically translates the concept of how a single discussion can impact a wider audience.

Behind the main interview area is a large video panel that echoes the large screens made popular at Silicon Valley keynotes and provides a prominent branding and storytelling element. Instead of traditional walls, the space features stacked vertically video panels that are primarily used to create a glowing colored backdrop for the discussion.

However, a touch of the unexpected is brought into the design when the panels are used to display imagery rather than solid colors. “Fear(less)” is designed to showcase long-form conversations between Ferriss and top performers, focusing on how they’ve overcome fears and made hard decisions, embracing discomfort and thinking big.