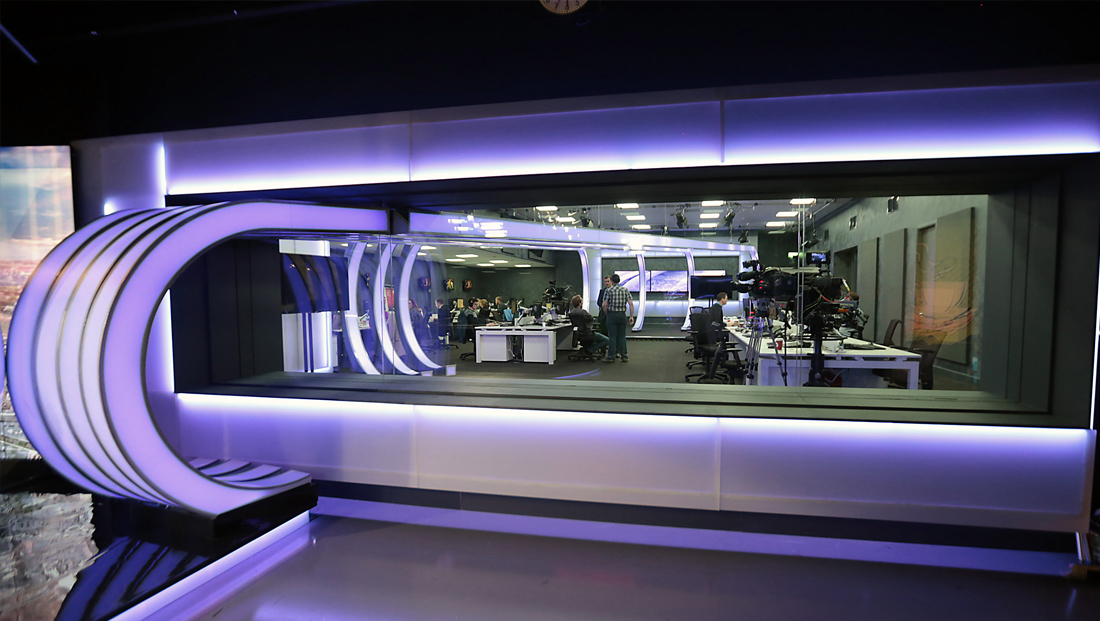 Ireland’s 3News has opened its new 3News Hub, an integrated studio and newsroom space that uses strong, dynamic visuals that highlights the connection between news gathering and news presentation. The new design, created by the network’s in house designer Fiona Cunningham and lit by Peter Canning, includes two sets of curved, internally lit grounds of bands that frame the design.

“The investment in this multi-million euro 3News Hub highlights the confidence that TV3 and Virgin Media has in our talented reporting team based throughout the country. The Hub will change how News is presented in Ireland and we are keen to take advantage of the cutting-edge technology available to us to bring independent and unbiased news to our viewers across all platforms, quickly and more often, seven days a week,” said Mick McCaffrey, head of 3News.

One of these groups, which wraps around one side of a video wall, is arranged in a staggered and stepped array that then curves down toward the floor when it approaches the windows overlooking the connected newsroom.

The other unit, meanwhile, starts with  a curved portion that flows up from the floor to the ceiling on the studio side while continuing through the glass and into the newsroom, where it bisects the workspace at an off-axis angle before curving back toward the floor and forming a concave wall that houses three video panels that serve as the primary backdrop of the working newsroom space.

The look not only ties together the two spaces but is also suggestive of pulsating data streams or the flow of information.

On the studio side, a glossy black anchor desk with curved corners perched atop a riser with “ramp” that wraps around the circular platform with integrated lighting.

The anchor desk is positioned to take advantage of both the newsroom view as well as the video wall tucked in behind the curved bands.

The video wall can be used as both a standup OTS element on the camera left side or, on the camera right side where the bands curl around, a more dynamic one shot. Other shots incorporate the entire span of the video panel, which takes on a unique shape thanks to those curves.

The set is designed with color changing technology for maximum flexibility, though the blue-violet color scheme notably matches the network’s new motion graphics package, which debuted Sept. 3, 2017 alongside the new set.

The network’s new graphics mirror the curved banded elements on the set through the use of extruded 3D elements in white and violet, which here to also suggest the flow of information.

The bar motif is also used in the lower third insert graphics, albeit in a flat, straight format.