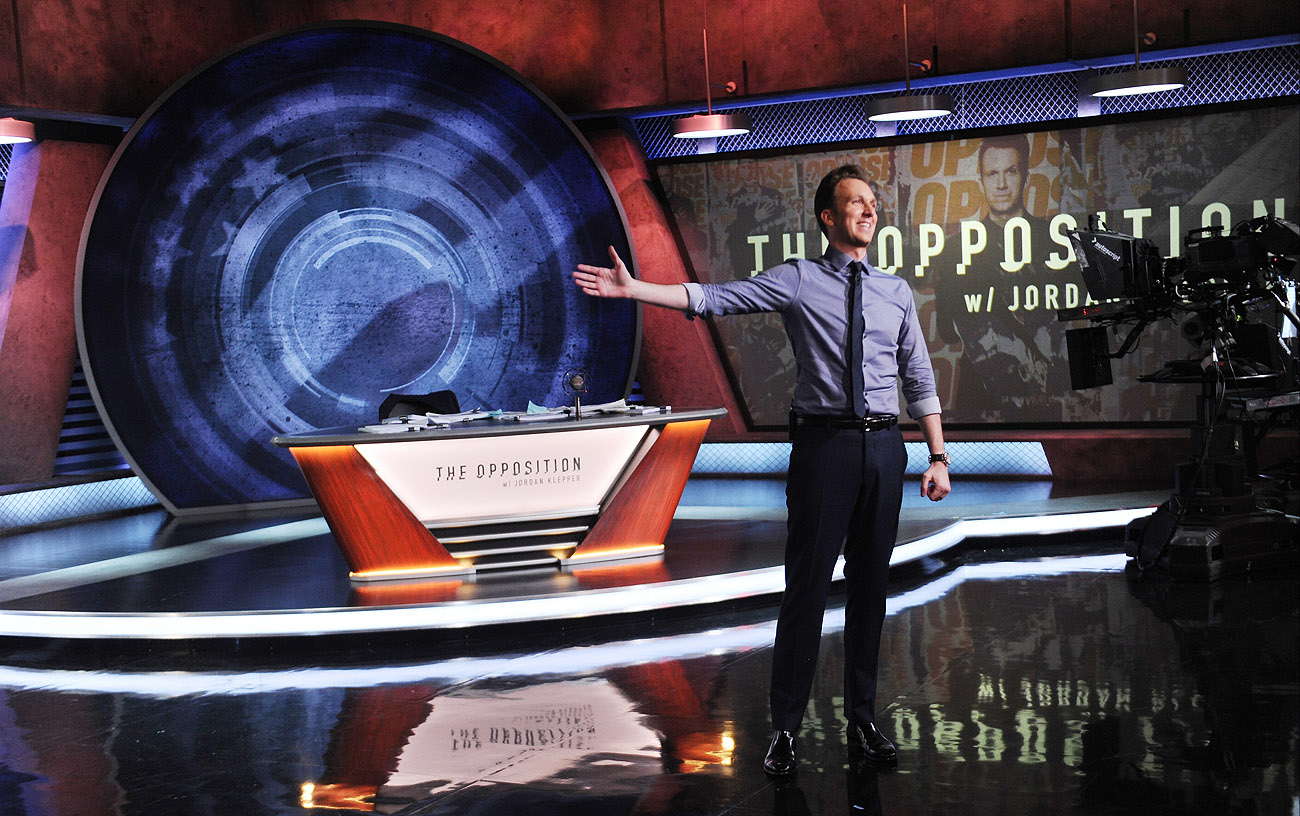 Comedy Central’s latest entry into the comedic news category is a satirical look at alternative media — “The Opposition with Jordan Klepper” — and the show’s set design aims to channel the look and feel of the very shows it pokes fun at.

The crux of the new show’s set, which is from 513’s Tom Lenz and housed at NEP Penn Studios in New York City, is a large round portal-style background featuring a textured, grungy-looking ring design with hints of the American flag and presidential seal.

This conspicuous background element not only draws the eye to the set’s focal point, its presenter and his desk, but also sets the tone for the oversize scale used throughout the design. The rough textures used in the background are also the first glimpse at the show’s overall look and mood — a mix of clean, modern shapes, industrial textures, and a bit of grunge.

The area also includes a smaller scale anchor-style desk, a design decision that appears to continue the idea of purposefully playing with the scale of the design and its relation to talent.

The desk does, however, leave plenty of room for Klepper to spread out newspapers and an old-fashioned radio microphone, similar to many pundits and broadcasters.

Off to camera right from the desk is a video wall with an angled side designed to match the diagonal columns that tuck themselves in next to the rounded portal element. The wall also features uplit metal grates to add both depth and texture. Meanwhile, a prominent element of the new set, the so-called “Murder Board,” takes on a decidedly low-tech approach — a bulletin board with newspaper clippings, photos and red string reminiscent of a police procedural or something you’d find in the creepy hidden room of a paranoid conspiracy guru’s house.

This area, which sits camera left of home base, is backed with a textured backward flag element created using painted metal filing cabinets.

The board, which is carefully curated and dressed, is used as a prominent storytelling element, both during the pre-show tease and other segments, and is expected to evolve with the show each week. On the far left of the board is an interview area backed with faux brick walls and angled columns carefully finished with a textured surface that matches the wood tones used throughout.

The inward-leaning columns also serve, much like the portal background, to draw the eye down toward the interview desk itself, which uses the smaller scale found at the main desk. They also create a “closed in” look that’s well suited for an interview area.

This area also includes industrial, wire-caged sconces and a small ring-shaped header that’s a sort of mix between high-tech chandelier and the ceiling-mounted elements popular on more modern news sets.