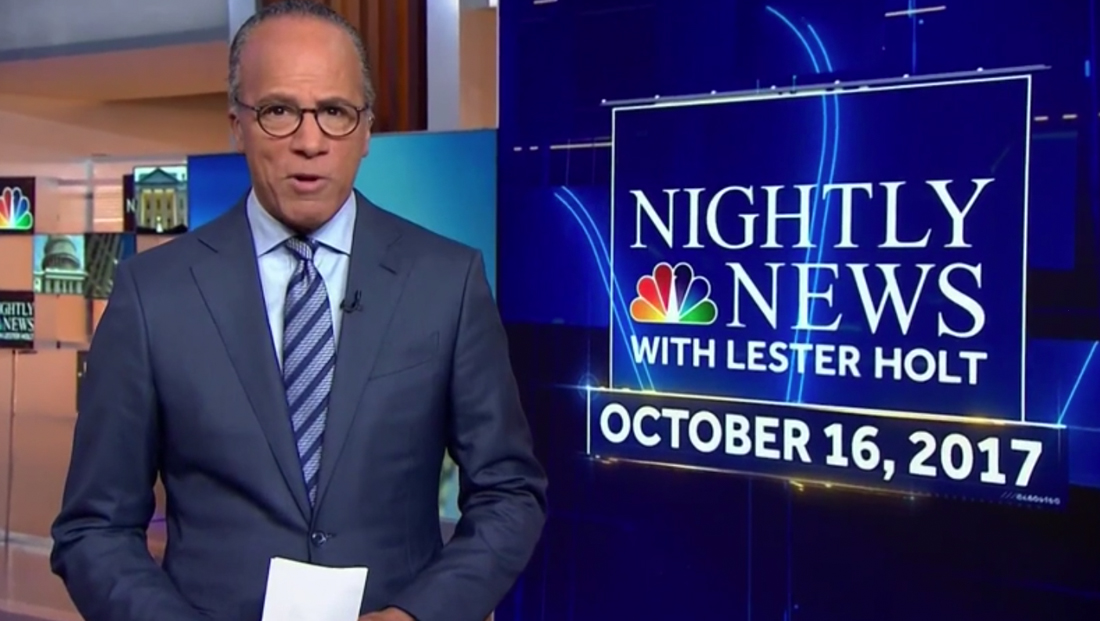 Over the past month, “NBC Nightly News” has made a series of small changes to its open.

The previous format, which typically started with anchor Lester Holt on camera introducing the first story tease was followed by five additional teasers with Holt providing a VO.

Holt would then appear back on camera saying “‘Nightly News’ begins now” or a variation.

The control room would then switch to an animated open with the full signature of the Mission theme, followed by an announcer saying “From NBC News World Headquarters in New York, this is ‘NBC Nightly News’ with Lester Holt,” as shown in the Oct. 9 edition:

Starting Oct. 16, however, the announcer’s role was stripped down to only the line “This is NBC Nightly News with Lester Holt.”

In addition, the opening animation was also shortened to eliminate the view of the world, Statute of Liberty and a good chunk of the flyover of New York City.

On Oct. 16, the broadcast featured six teases, including one that Holt appeared partially on camera. The “‘Nightly News’ begins right now” line was also eliminated.

The next day, however, the tease count was upped to seven plus an additional one delivered by Holt on camera without any video.

Then, Oct. 23’s edition saw another change — Holt no longer appears camera before the animated open, though seven stories are still typically featured in the teases.

It’s also worth noting that, with Holt anchoring from Los Angeles this week, the open does not include a “reporting tonight from Los Angeles” voiceover, something that was typically featured in past editions of the broadcast anchored outside of the studio but also makes the title sequence longer.

The broadcast has also switched over to feeding orange, rather than blue, shade on its on-set LED elements in recent weeks.