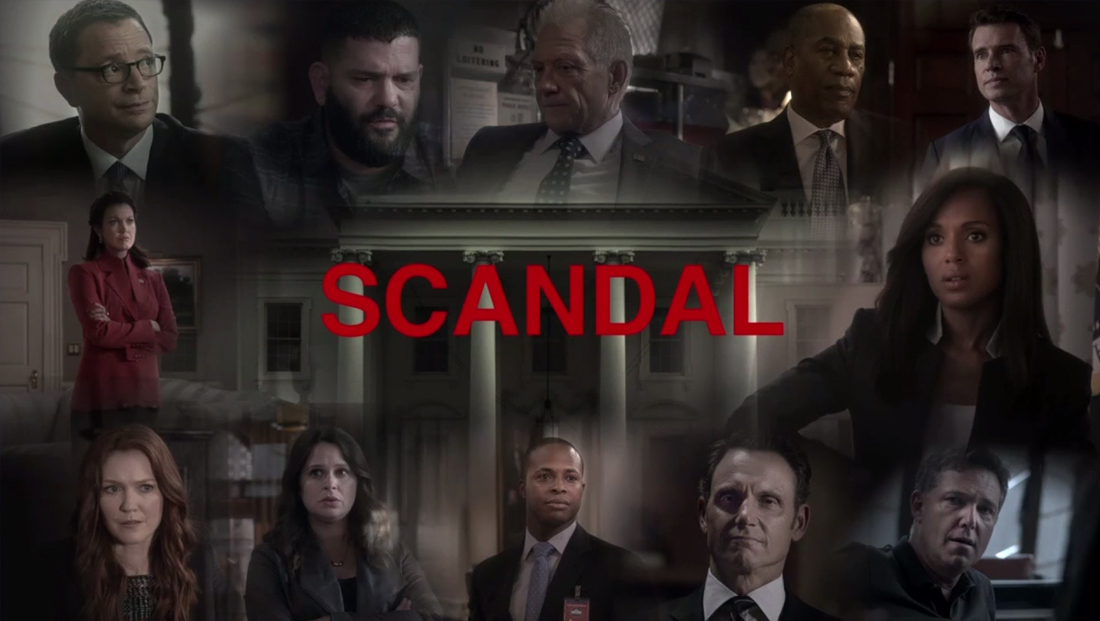 ABC’s “Scandal,” which is starting its final season, unveiled some key updates to its production design during its season premiere, including a new title card, updates to the Oval Office set and a new “set within a set.” The show, which previously used a title card that featured a Helvetica-ish font with snapshots of imagery shining through, updated its title card to feature the show name in red text and still, faded images of its key cast members surrounding it.

The camera shutter sound effect, which is also used between scenes and acts, remains in the title sequence.

In addition to the title card, several elements within the show have been updated, most notably the Oval Office set. With Mellie Grant (Bellamy Young), the ex-wife of previous president Fitzgerald Grant (Tony Goldwyn), finally taking office as president, the oval office got a decor update, just as it does in real life with each incoming president.

The most notable switch is the shift in color palette from tans and golds to blues and grays with gold as an accent color.

While the lighter shades of blues and grays used on the walls and drapery are on the softer side, the selection of powerful blue conveys a sense of strength and power at the same time, while the gold tones draw a visual connection to the earlier decor.

The set’s floor also received an interesting update, which viewers were treated to in the first episode of Season 7 thanks to an aerial view of the office as the episode closed. The carpet, which still features the presidential seal in a bold line-art style rendition, is also ringed with quotes from famous women in U.S. history, including Elizabeth Cady Stanton and Sojourner Truth, a fitting nod to the first female president in the Scandal universe. Other nods to famous women include a poster of Victoria C. Woodhall, a suffragette, above the fireplace mantle, along with new sofas, side tables with clean white table lamps and a tufted, high wingback chair behind the Resolute Desk.

Accessories on the new Oval set include small topiaries, decorative glass pieces and a gold and glass lamp on the desk. The new season of “Scandal” also introduced a new show within the show and, by extension, a new character in Curtis Pryce, who hosts the fictional political show “The Pryce of Power.”

Pryce, played by Jay Hernandez, spars with Olivia Pope (Kerry Washington) both on the show’s set and off it.

The set itself features a small anchor and interview desk with a dramatic nightscape of the Capitol behind it. Bold, internally lit red columns flank it, mirroring the shades in the Washington skyline backdrop.

Other features of the set include framed blue panels with borders with integrated lighting as well as a freestanding monitor in a dark gray frame and internally lit header element.

The design of “The Pryce of Power” set is not as dramatic and thematic as the set of “The Liberty Report,” the show hosted by recurring character Sally Langston (Kate Burton) that played a prominent role in previous seasons. The fictional BNC also continues to make appearances in “Scandal,” using the same gray and blue set it has for much of the series’ run.