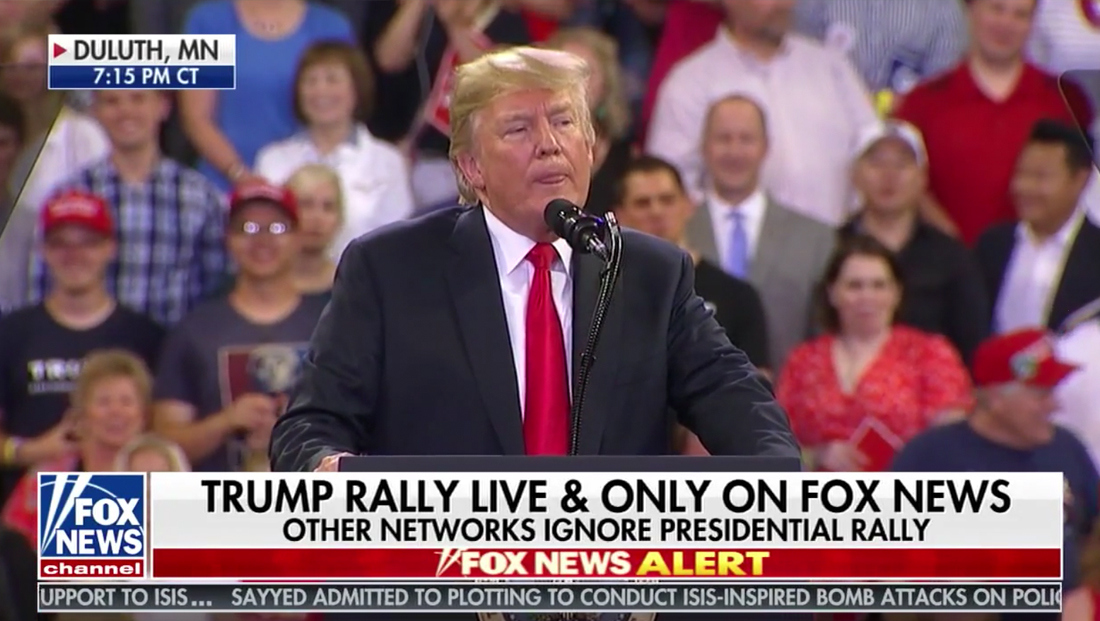 In a move that’s perhaps a few steps shy of “I know you are but what am I?” Fox News threw shade at other networks for “ignoring” a Donald Trump campaign rally in Duluth, Minnesota the evening of Wednesday, June 20, 2018.

The network began teasing its coverage of the rally during “The Story with Martha MacCallum” (with Bill Hemmer filling in for the titular host) with a live feed from the rally in the lower right corner of the screen with the header “Awaiting Trump rally.” Then, toward the end of “The Story,” the network cut to full coverage of the rally.

But it was during “Tucker Carlson Tonight,” which lead with the story under its iconic “Fox News Alert” branding, when the network got snarky with its lower third insert banner — putting up “Trump rally live & only on Fox News” in one tier and “Other networks ignore presidential rally” below and the bold red and yellow alert branding in the “sliver” below.

In a day marked by another high profile lower third error, it’s worth noting that, on social media, many were quick to point out that OAN also was airing live coverage of the rally, which meant the lower third wasn’t accurate.

C-SPAN also carried much of the rally live.

Fox News' shot of black man at Trump rally called a 'lie' — but it was true https://t.co/LmPYKMCwzg #TVNews #BroadcastNews pic.twitter.com/xPp2PDYJbg

Fox News was, however, the only commercial cable network with nationwide availability on most standard cable bundles to carry live rally coverage.

While OAN is carried nationally on U-verse, DirecTV, Century Link Prism and Verizon FiOS, it’s typically on a higher tier and doesn’t have nearly the carriage (or viewership) of Fox.