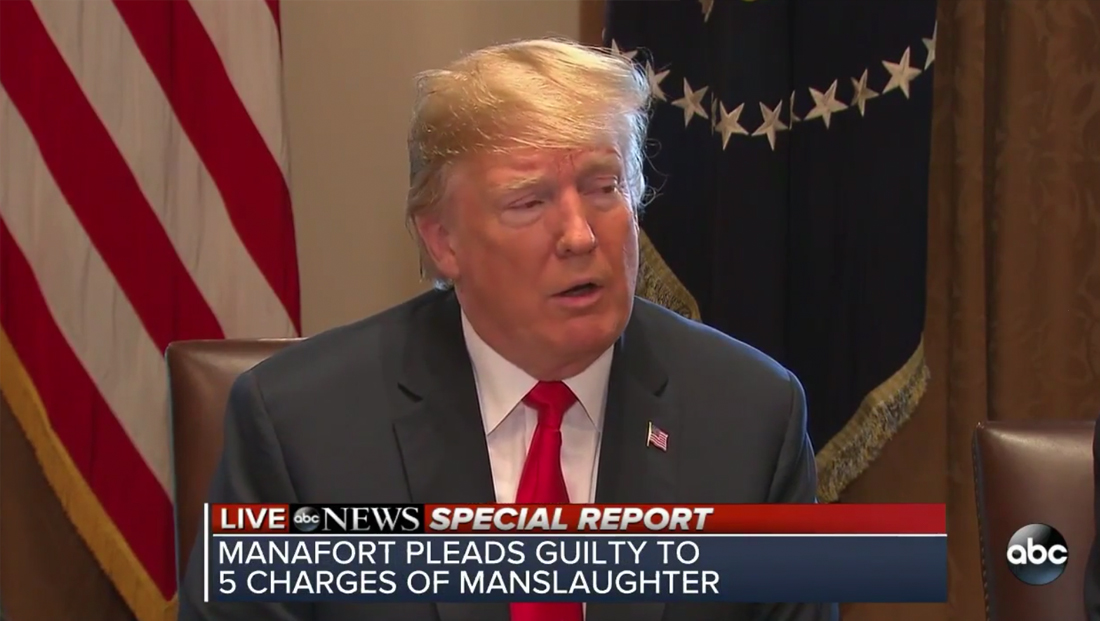 During an ABC News special report, the network inadvertently aired an inaccurate lower third banner claiming that Donald Trump campaign adviser Paul Manafort had been charged with manslaughter — so how could such a mistake have happened? The erroneous lower third, which read “Manafort pleased guilty to 5 charges of manslaughter,” was on screen for only about six seconds at around 12:21 p.m. eastern, seemingly popping in randomly before the network switched back to the headline that had been on screen.

The banner was apparently referring to the former Donald Trump campaign manager who is currently jailed facing charges for obstruction of justice and witness tampering — however, Manafort has not and, as far anyone knows, will not be facing manslaughter charges — and plead not guilty to the charges he is facing.

About an hour after the graphic aired, ABC tweeted a two part apology via its PR account:

(cont.) We apologize to our viewers and to Mr. Manafort. There simply is no excuse for this sort of mistake. (2/2)

WLS, the ABC O&O in Chicago, also mentioned the incident and apologized for the error during its 4 p.m. central newscast.

As the tweet mentions, the network is facing the question of how, exactly, that text was in its graphics system and ultimately made it to air.

In many cases, any text shown in on air graphics has to been inputted, either manually or through an importing process, into the graphics system, though the increasing use of advanced graphics systems that can receive feeds from external sources could be partially to blame if ABC uses such a setup.

However, even that theory doesn’t make much sense since it’s not clear why a third party or external system, assuming that is to blame, would have been outputting that information to begin with since basically every part of the headline is inaccurate.

Other possibilities? The text could have somehow been coagulation of two unrelated headlines that were floating around the graphics system. Or, a graphics operator or other member of the production team could have typed the information into the system, either as a joke or as some kind of test, and it somehow made it into the network’s feed.