As reviving old TV shows becomes a more popular trend, bringing those shows’ settings back to life from VHS graves is becoming common — but “Murphy Brown” and its “show within a show” provided production designer Jane Musky with some unique opportunities and challenges.

Musky was brought on board to design the sets for the new “Murphy Brown” by the show’s creator and executive producer Diane English. Musky and English had worked on a feature film before, but this was Musky’s first work in the world of Murphy Brown, a fictional TV news journalist.

One of the main sets — on both the original run and revival — was Brown’s townhouse.

Working from the originals

The team found the original set blueprints and worked from these to recreate the townhouse’s entryway and great room, as well as Phil’s, the local bar frequented by the Brown and her news team.

While details down to the moulding were carefully recreated, a few tweaks were made to the layout to accommodate the layout of the new soundstage in New York — just like the old set’s layout was influenced by the California studio the show originally used.

During its initial run, “Murphy Brown” filmed on Stage 4 at the Warner Brothers lot in Burbank.

Musky journeyed to the lot’s prop house in L.A. and was able to find most of the set’s original props. “They keep everything,” said Musky with a laugh, noting the facility has items going back to the 1930s.

“The cast was very happy to see to those pieces,” said Musky. Candice Bergen, who plays the titular character, was particularly touched to see some of the same pieces from the set she worked on for the previous ten seasons.

The townhouse was updated, however, to accommodate the passage of time. “I asked myself, how has Murphy spent the last 20 years raising a son?” explained Musky.

Musky also notes that Brown’s taste is “eclectic” and, while “she knows what the good stuff is,” she also lived the life of a busy television personality and single parent. “She kept adding on” as her son Avery grew up.

Taking all that into consideration, Musky updated the set to appear “lived in.”

A key part of this strategy was adding pieces of Avery’s sports equipment that, despite the fact he’s fully grown and moved out, have still stuck around Brown’s home, replacing the baby and children’s toys that were scattered around the set after Avery was born in the initial run of the series.

Bergen and Jake McDorman, who plays Avery, also contributed photographs from their own past, which were Photoshopped together to create scenes of mother and son together over the years — as well as Avery with his buddies. These photographs were added throughout the set and show up behind the action. 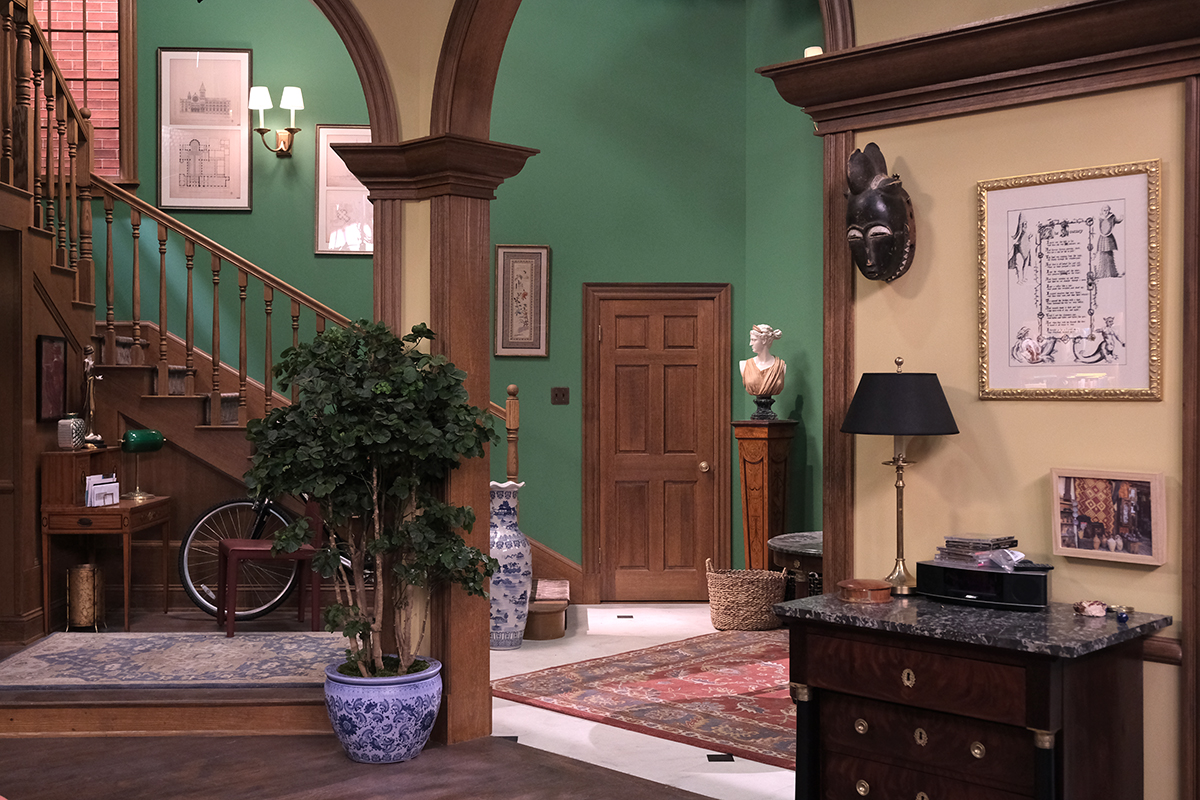 The one element that didn’t change was the townhouse’s green foyer walls — which Musky and the production team felt was important to keep the look familiar to fans of the original run.

“Who knows if it’s ever going to get repainted,” she said with a laugh, a reference to a running joke that Brown employed painter Eldin Bernecky (Robert Pastorelli) for six seasons on a seemingly unending series of projects that were frequently interrupted by his more artistic ventures. 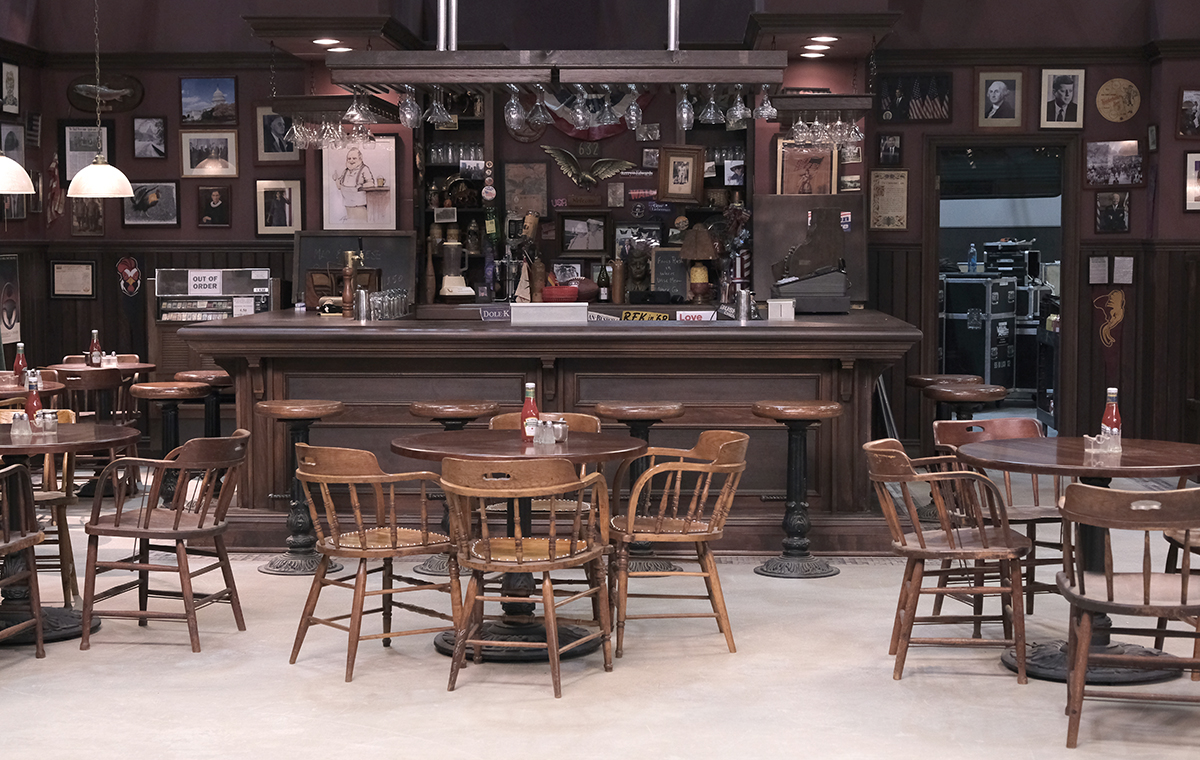 The Phil’s bar set was recreated — but the walls were updated with more timely images. Photo by Jojo Whilden.

The structure of Phil’s, meanwhile, was kept the same as well — but key updates were made on the walls, which were previously adorned with political pieces dominated by white men.

Now, taking into consideration both the changing times and that both the character of bar owner Phil and the actor who portrayed him, Pat Corley, have died, with his sister Phyllis (Tyne Daly) having taken over the establishment, the walls have a more diverse look.

Prints now include female candidates and references to more current political movements. Overall, the goal was to make the bar more open-ended, and more representative of the state of the world.

The changes were also meant to reflect the transfer of ownership.

While Brown’s life outside of work was kept largely the same, her workspace was updated significantly — and with good reason.

When “Murphy Brown” originally went off the air in 1998, MSNBC and Fox News were only two years old — this meant the “original” cable news channel, CNN, which had already been on the air for 18 years, was still adjusting to the idea of having competition.

Since then, however, both traditional broadcast TV news and cable news have evolved a different kind of content and a new look.

As part of the show’s storyline, Brown had retired from the “FYI” newsmagazine “show within a show” in the original series.

In the first episode of the new season, Brown decides to make her comeback — but to cable news. 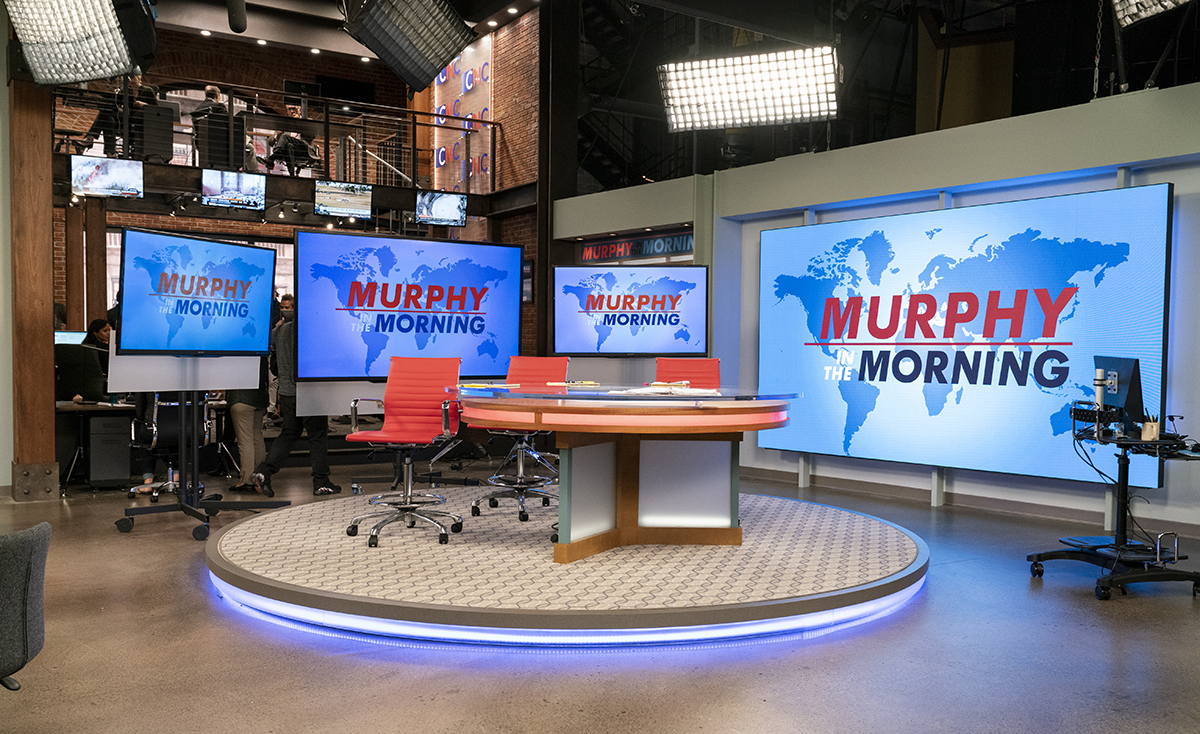 She joins “CNC” (short for Cable News Channel) and launches “Murphy In the Morning.” Coincidentally, Avery also inks a deal to host a morning show — opposite his mother’s timeslot — with the “Wolf Network” (a not-so-subtle nod at Fox News). 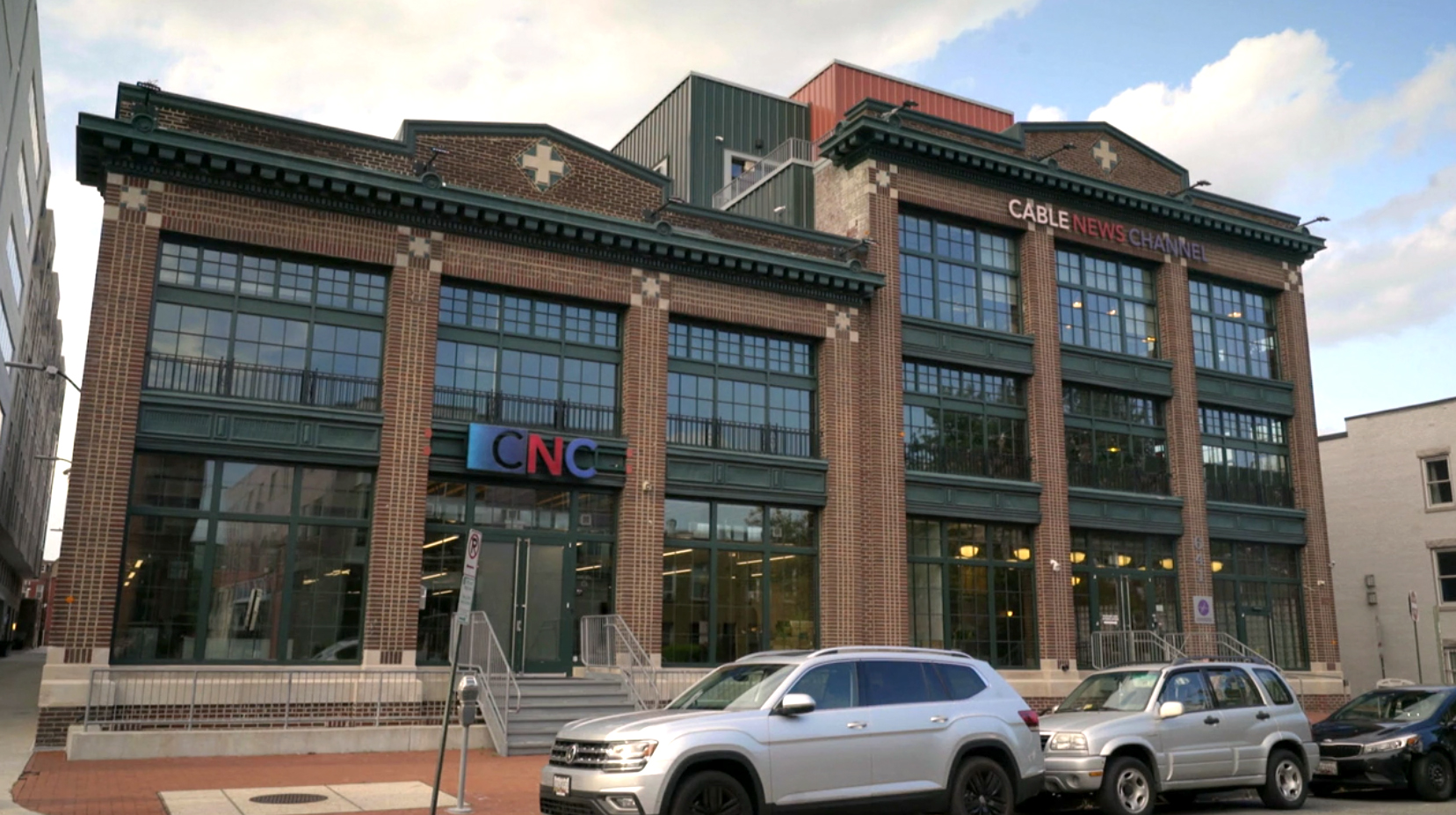 Musky scouted locations in Washington, D.C. and selected a former Wonder Bread bakery to serve as the exterior of the CNC building — with the network’s logo composited onto the building’s exterior.

The building’s exterior then inspired the open, flowing workspace inside that serves as the newsroom, coffee area and studio for “Murphy In the Morning.”

On the previous show, the studio, newsroom and workspaces were, quite literally, more compartmentalized, but a decision was made to open up the space.

“I had to figure out how to have the newscast area integrated into the workspace,” said Musky.

“Cameras are more fluid now,” she noted. Not only does this allow wide, sweeping views of the work area, it gives actors more flexibility to “wander” as opposed to the more tightly shot and edited style popular in TV production during the show’s original ten seasons. 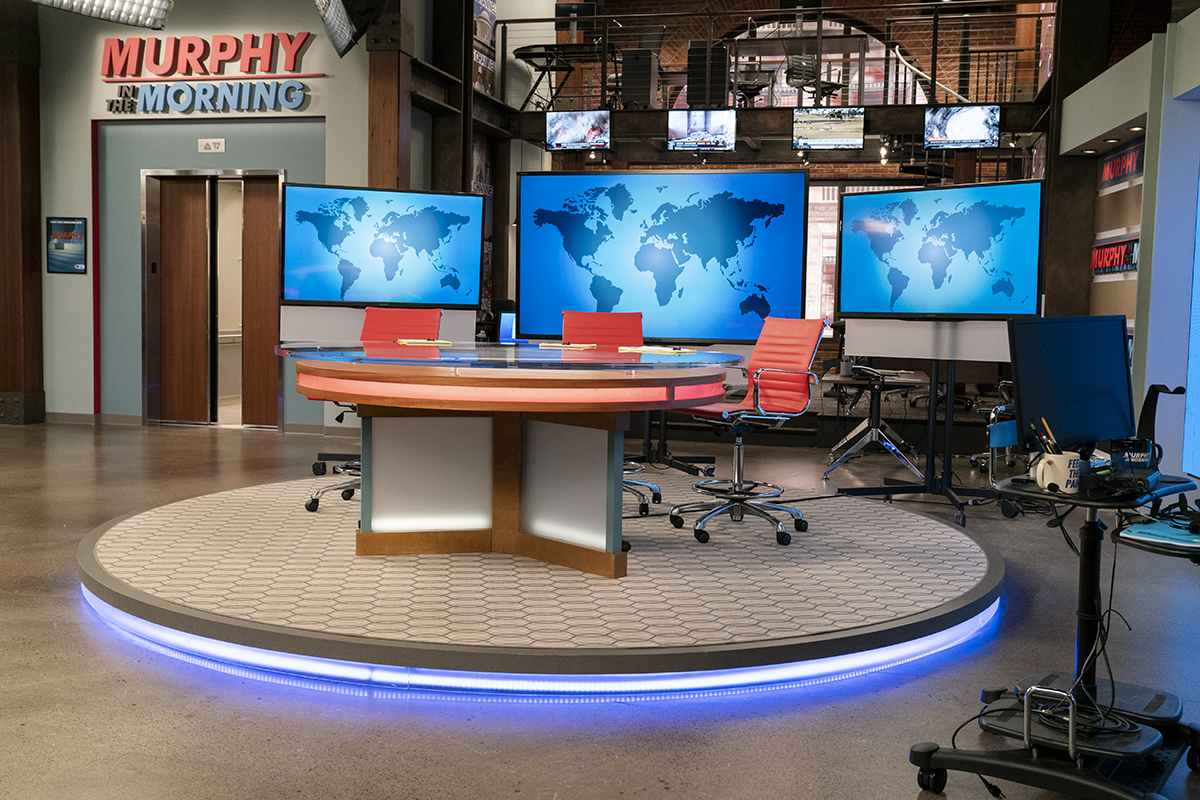 The elevator — which, in the new season’s debut episode, is used prominently by a surprise guest star — remains the center of the newsroom set.

Despite the openness and fluidity of the spaces, it’s worth noting the CNC set maintains many similarities with the basic layout as the “FYI” newsroom — with the elevator at center.

Respecting the original geography was important to both English and the actors — allowing them to maintain similar rhythm and timing.

To reflect advances in technology and current broadcast design, the “Murphy In the Morning” set within a set features three freestanding video panels as well as a large, seamless video wall. 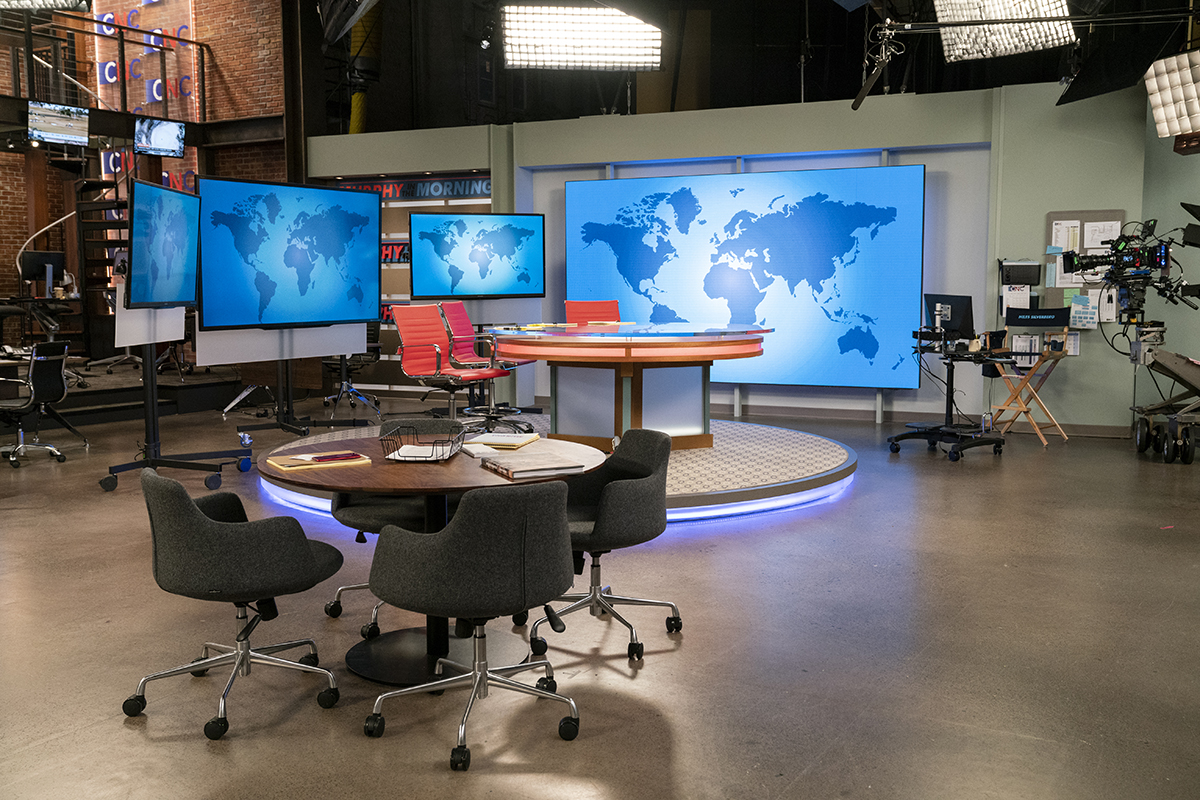 Nearby the ‘set within a set’ is a conference area. The set also includes ‘behind behind the scenes’ areas, such as the area to the right of the large seamless video wall.

“Those are kind of a calling card of TV news today, so we were sure that would be a basis for what we would be presenting for the newscast,” said Musky, noting that Brown jokes about the new set’s similarities to “Star Trek” in the first episode.

The “Murphy In the Morning” set also features “off camera” areas to capture actors gathered behind the scenic areas — often whispering while the fictional news program is on the air.

One of the actual cameras used to shoot “Murphy Brown” has a CNC logo affixed to the side — allowing it to appear on camera in wide shots during the newscasts taking place inside of the show’s storyline.

For the show within a show’s graphics, English and the design team opted to keep the original Murphy Brown title card in Futura Standard Bold Oblique, along with its bold red line.

The red tone, meanwhile, was blended with blue to create a look that references the U.S. political news landscape. 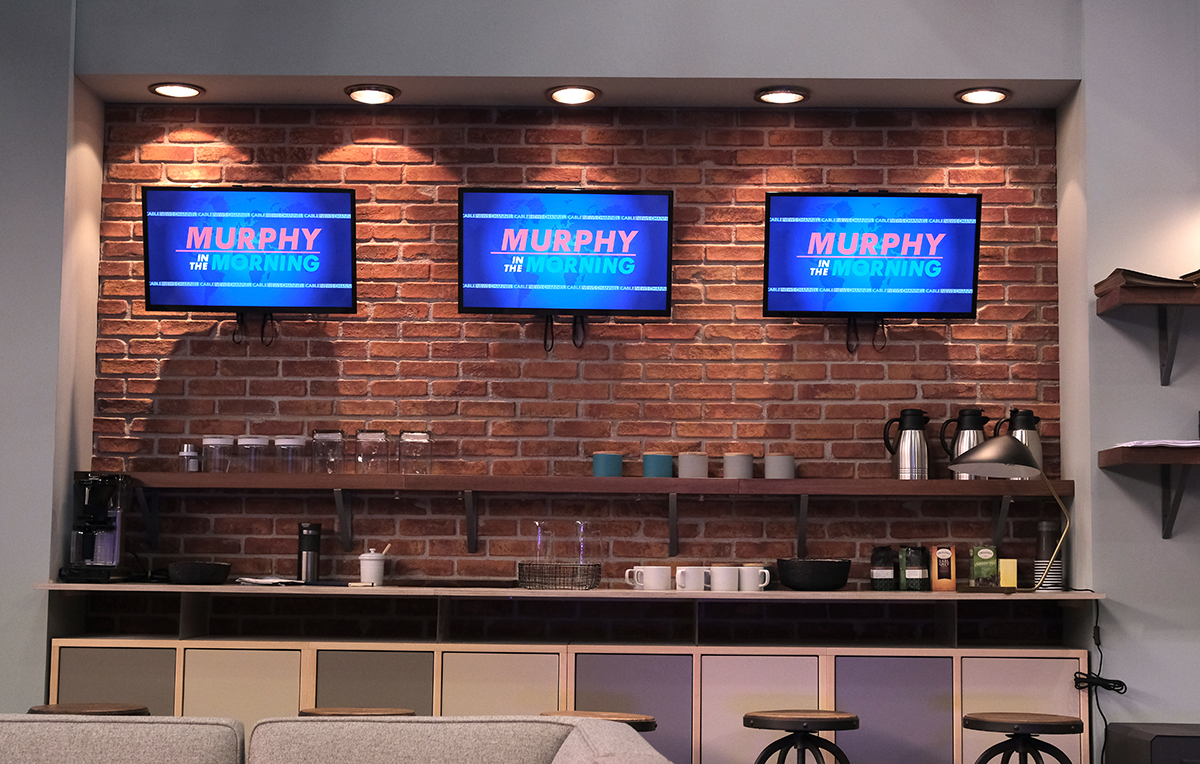 The exposed brick walls, such as the ones in the coffee bar area, help warm up the bold blue and red ‘Murphy in the Morning’ and CNC logos and graphics.

English and Musky worked with graphic designers to create a “Murphy In the Morning” logo that uses the same font as the “Murphy Brown” title card.

It was a careful balance to keep the graphics, particularly the red, from overpowering the screen, explained Musky. The newsroom’s warm earth tones are a key way to help offset that.

“So you’re not hit with that Fox News red everywhere,” said Musky.