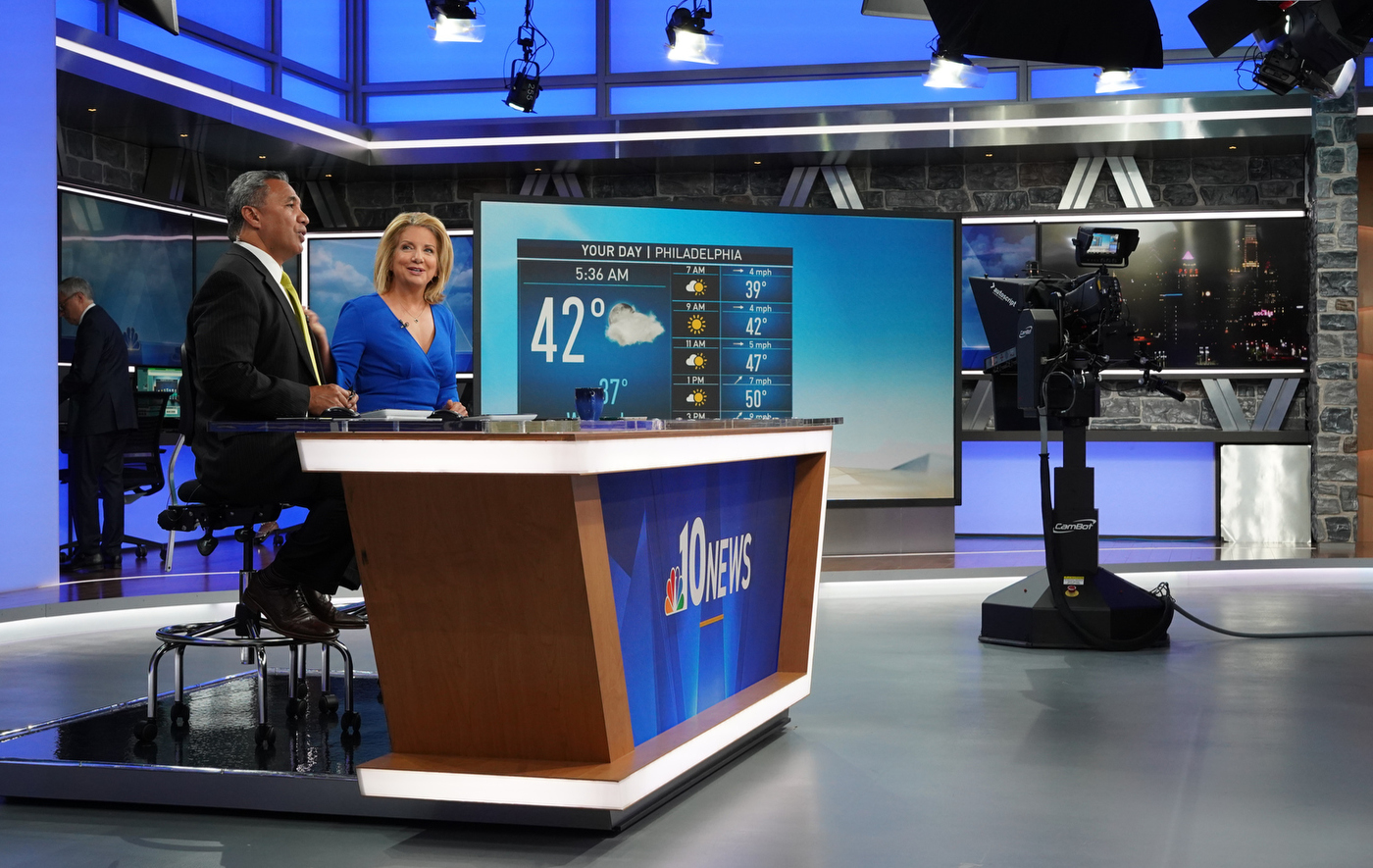 With the latest in IP infrastructure and storytelling technology, NBCUniversal’s duopoly in Philadelphia has completed its on-air move into the Comcast Technology Center.

“From our open newsroom layout to our studios that feature cutting-edge technology and distinctive Philadelphia-area designs, the Comcast Technology Center enables our team to leverage innovative technologies in our storytelling,” said Ric Harris, the station’s president and GM. 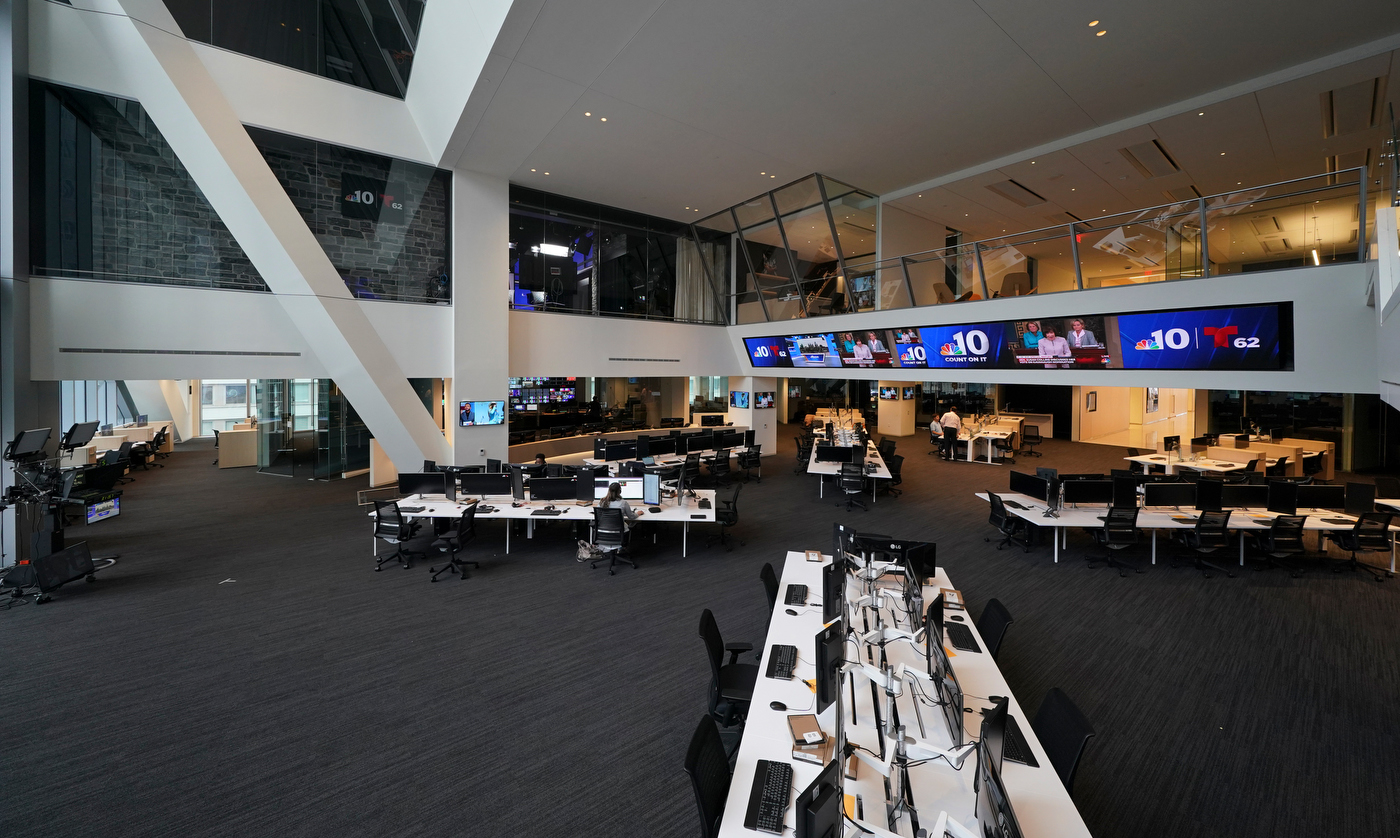 The newsroom space. Photos courtesy of NBC 10 and Telemundo 62.

Tony Plosz, VP of Operations and Engineering for NBC 10 and Telemundo 62, notes that the building features a variety of enhancements, from the three-story sky garden to the abundance of collaboration space to relocating the various all-news operations onto a single floor.

The new facility was built on the SMPTE 2022 standard for IP production, as the SMPTE 2110 standard was not finalized at the time of build-out.

Working with Diversified, the station integrated Grass Valley and Cisco technology at its core, with Dalet providing asset management and Ross Overdrive for broadcast automation.

TVNewsCheck notes that there are 60 miles of fiber in the Comcast Technology Center, providing unparalleled connectivity and allowing much of the building to become a broadcastable space. 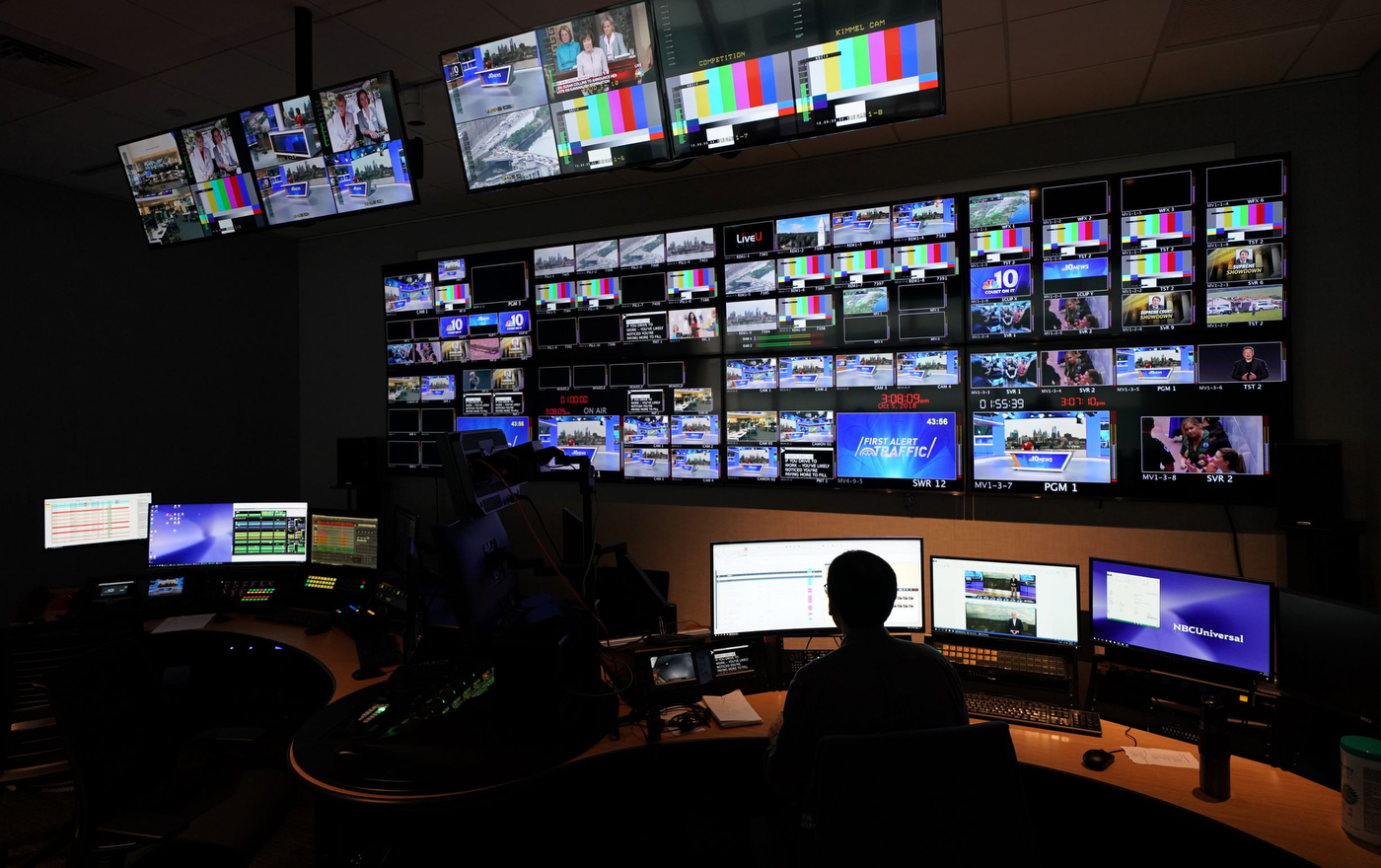 “Our expanded area-wide data network lets us bring in more video feeds than before (we’ve added IP-backhauls to carry both traditional microwave feeds, beauty cameras, and other video feeds if needed),” adds Plosz.

This video network is used nightly by the primary video backdrop for the station’s newscasts with NBC 10 featuring a 4K live video feed behind the anchor desk.

Similarly, the station’s Grass Valley LDX86 cameras are also 4K-ready; however, for the foreseeable future, the primary usage of 4K content will be the main video wall.

A set with a view 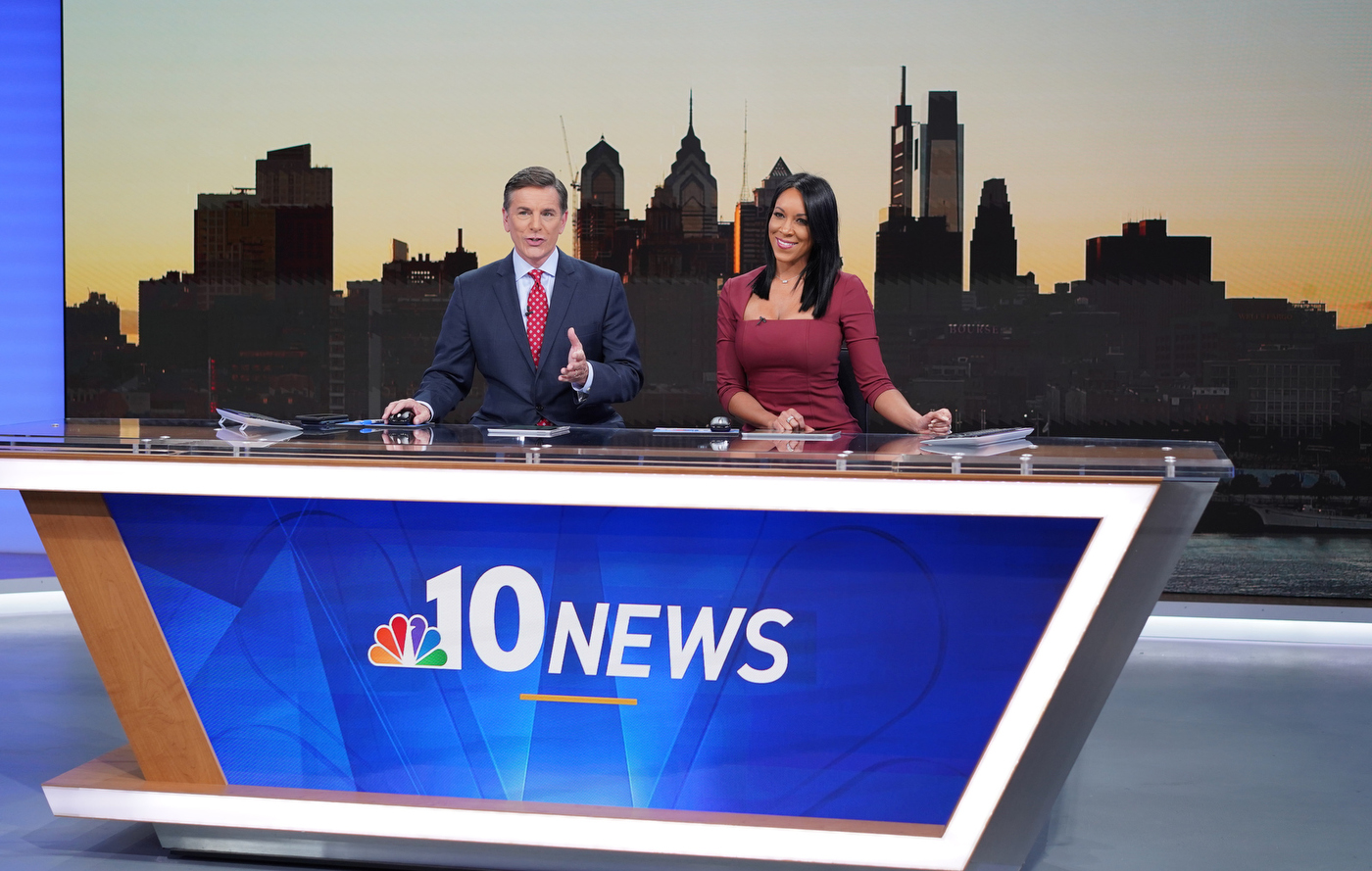 The anchor area of the NBC 10 news set.

The set is “big, bold, and highly flexible,” said Plosz, “to accommodate a variety of presentation areas and flexible technology to keep viewers informed and engaged.”

Uplit wood panels and stonework are combined with faux-steel beams, mimicking the building’s larger architectural design to create a 2,600-square-foot space for NBC 10. Additional presentation areas beyond the large video wall include a working weather center and a traffic nook.

For Telemundo 62, a backlit portal wraps the primary LED video wall with multiple video arrays on either side of the anchor area. 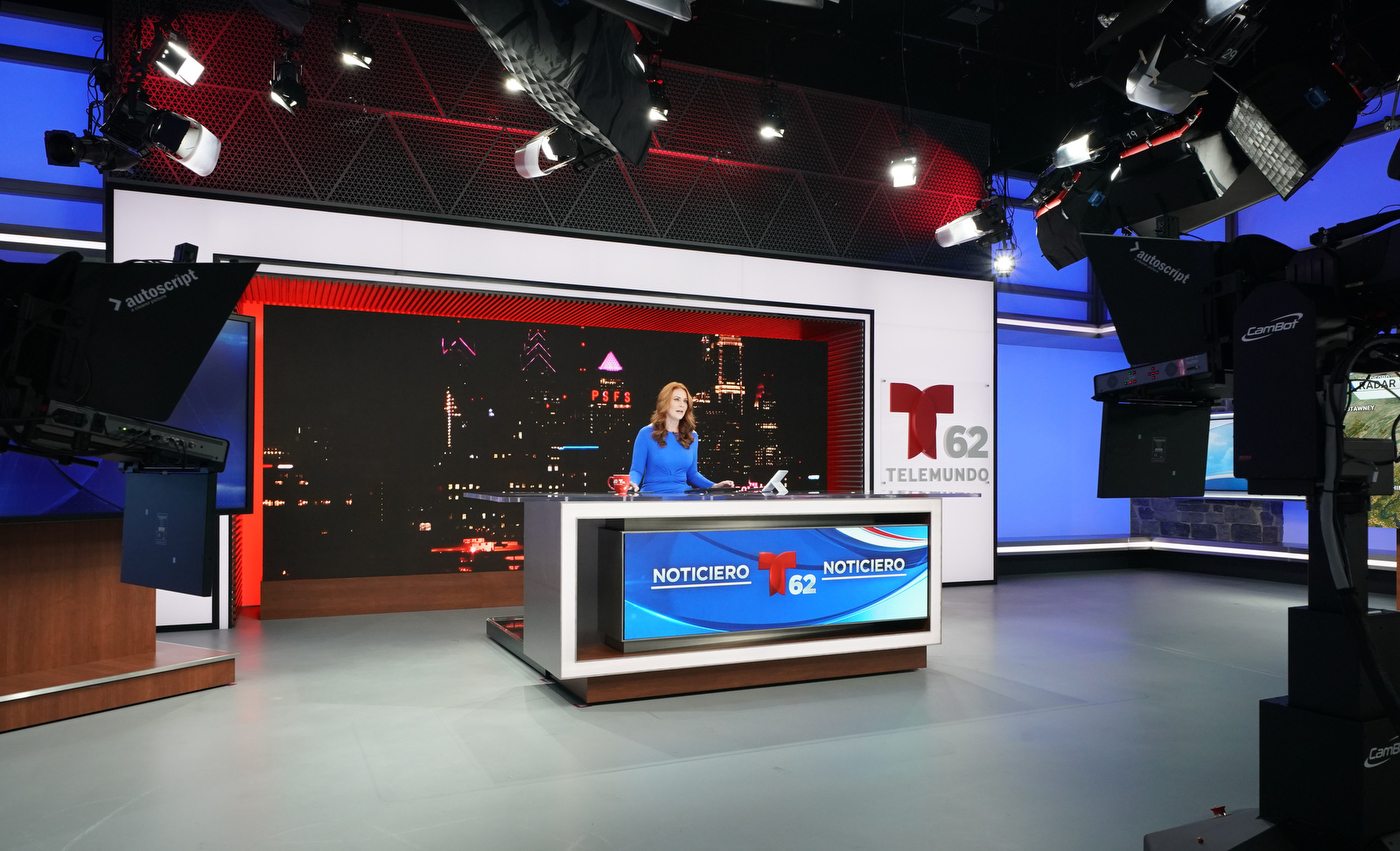 The set of Telemundo 62.

“We look forward to delivering news and information that our audience expects from us while setting a new standard for Greater Philadelphia and our industry,” Harris concluded. 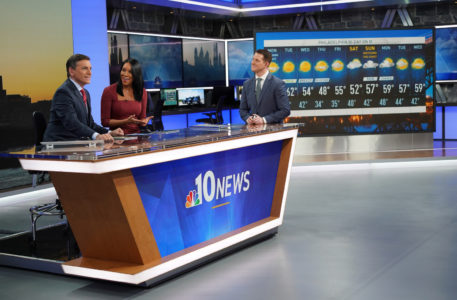 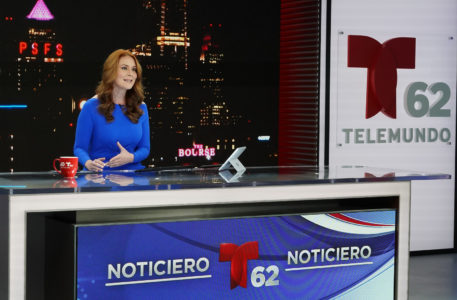