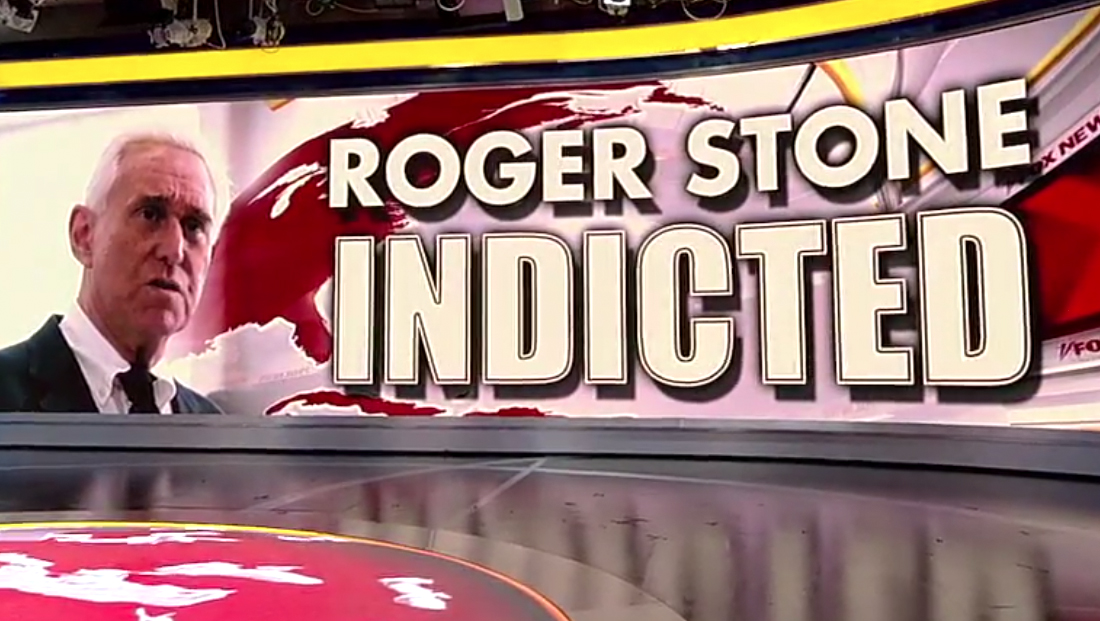 Despite CNN having exclusive video of the arrest taking place, MSNBC managed to beat them to air with the news by just moments, according to the networks’ own time bugs.

CNN, like Fox and MSNBC, start their flagship morning newscasts an hour before the big three broadcast networks, so all three cable channels were on the air when the news broke.

MSNBC “Morning Joe” anchor Willie Geist, who was anchoring the show solo Friday, Jan. 25, 2019, interrupted a segment about the government shutdown at 6:20 a.m. eastern before pitching to Julia Ainsley, who was in Washington and literally reading notes off her smart phone on air.

CNN interrupted an interview about Michael Cohen at 6:22 a.m. with an announcer-less breaking news stinger for “major breaking news in the Mueller investigation” and was joined by Sara Murray on the phone. 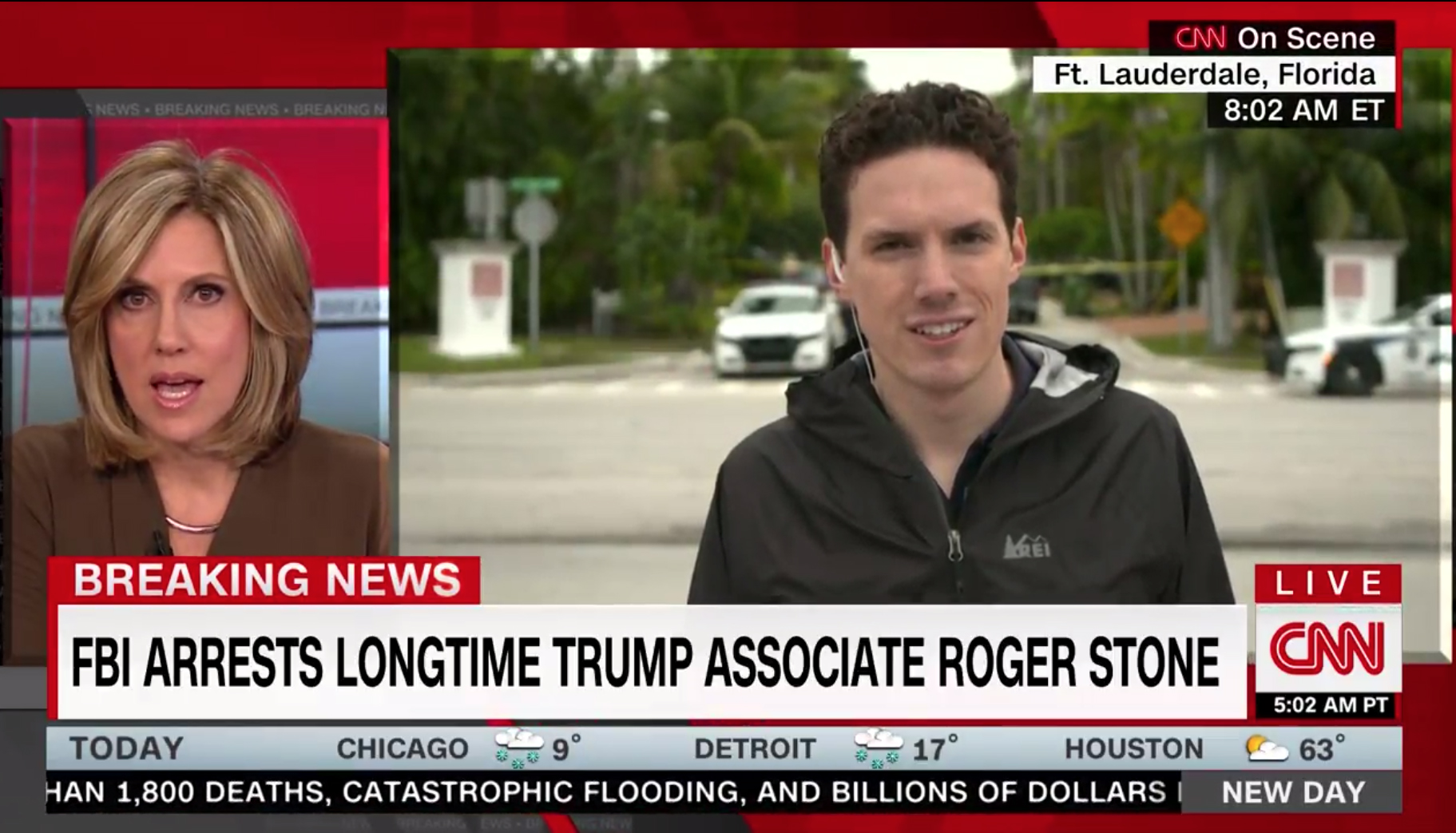 Producer David Shortell reports live on CNN’s ‘New Day’ with what appears to be an ear bud standing in for a ‘real’ IFB outside of Roger Stone’s home in Ft. Lauderdale.

This is what Fox's Chyron said as other cable nets were breaking Roger Stone story… pic.twitter.com/o4CWQSA3zG

Fox was last. The news broke while the network was in the middle of an interview on “the media’s attack on Christians” (as its banner read) and the value of Christian education.

After wrapping the interview, co-host Ed Henry, who was filling in for Brian Kilmeade, who is in Texas for the network’s so-called “Breakfasts with Friends,” announced “we have this bulletin out of Washington…” as the Fox Alert stinger played.

He then promised “the breaking details from Fox, next,” before Ainsley Earhardt tossed to Kilmeade in San Antonio, Texas, who walked around the dining room of a restaurant teasing his “Breakfast with Friends” segment.

The network then went to commercial break, returning at 6:33 with another alert stinger and some additional ad-libbed details. At 6:35, the network tossed to Kilmeade for a brief discussion on Stone before, at 6:37, dumping out of Stone coverage in favor of interviewing people in the diner under the banner “Breakfast at the Border.”

Parrotting Trump, '#FoxAndFriends' bills a segment from #SanAntonio as 'Breakfast on the Border' even though it's a 160 mile drive from the city to the Mexican border. pic.twitter.com/BqXkRJWVE2 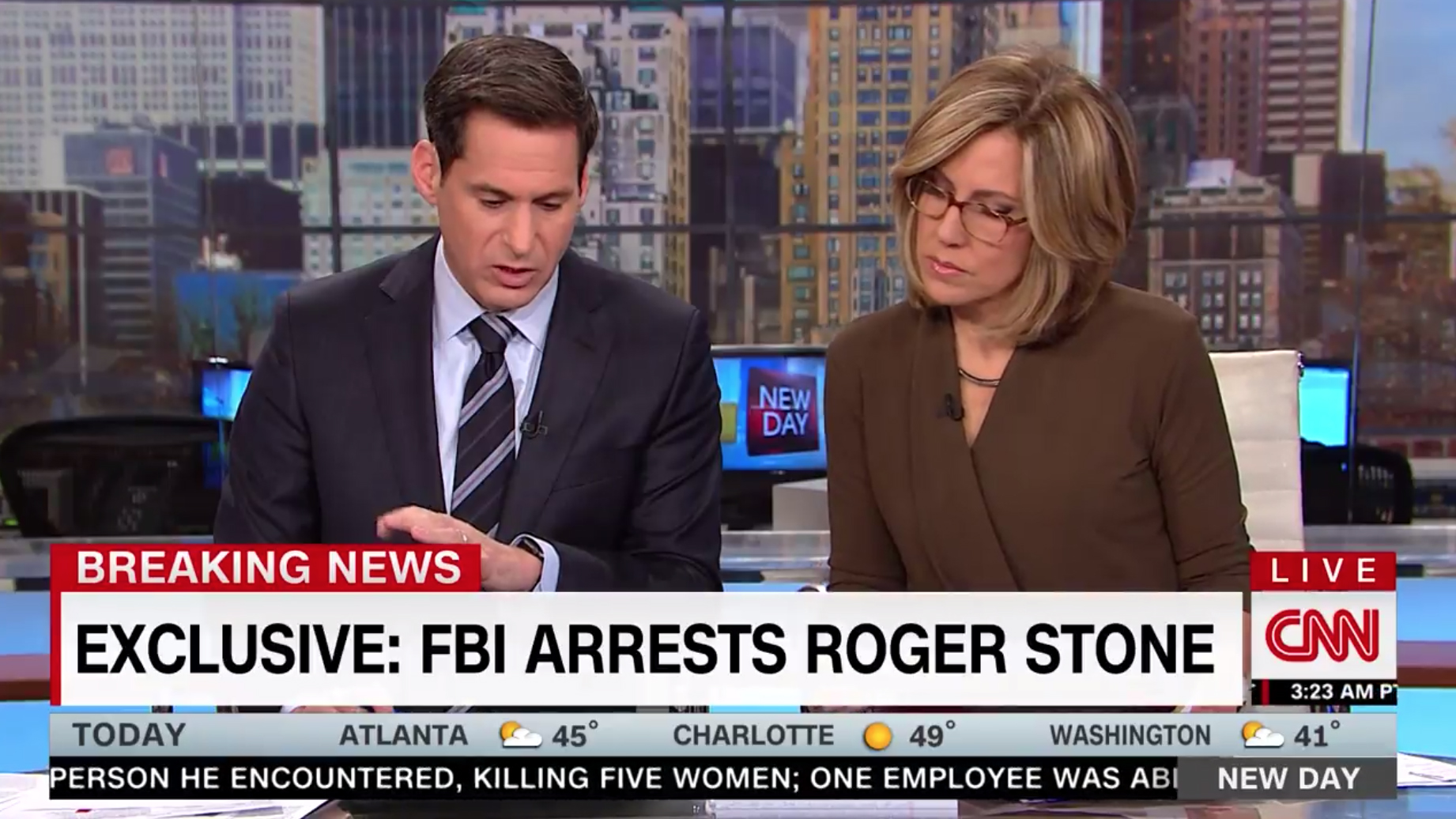 Both broadcast and cable networks were received the text of the indictment against Stone while on air and many anchors and correspondents were either reading excerpts from it on air directly from a printed copy or admitted they would need more time to delve deeper into the legal documents.

On the network morning newscasts, meanwhile, producers had about 30 minutes head’s up before hitting the air at 7 a.m. eastern, and the story lead “Today,” “Good Morning America” and “CBS This Morning” though all three were light on graphics given the limited prep time. 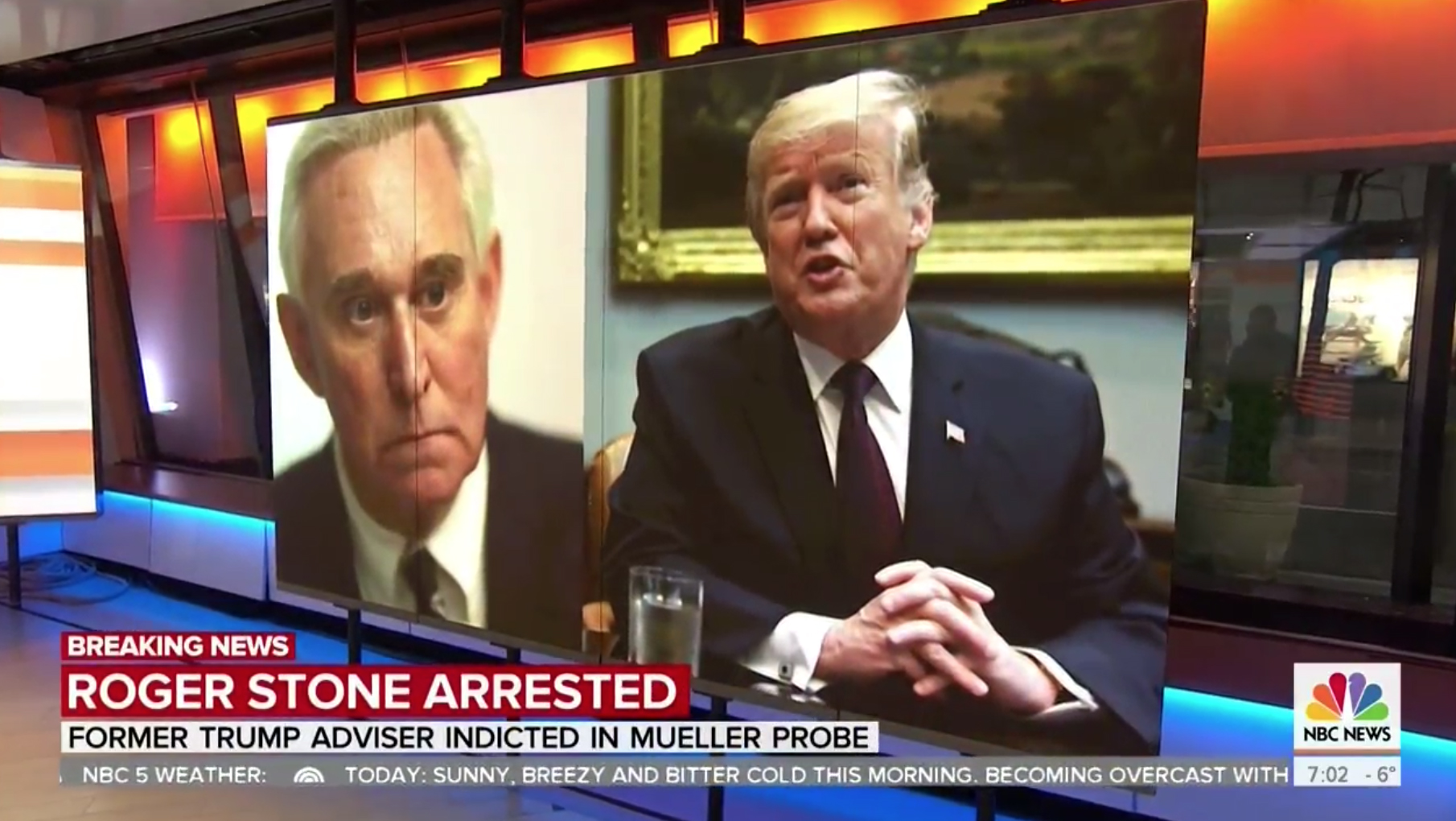 NBC’s ‘Today’ did have photos of Stone and Trump on its production area video panels. 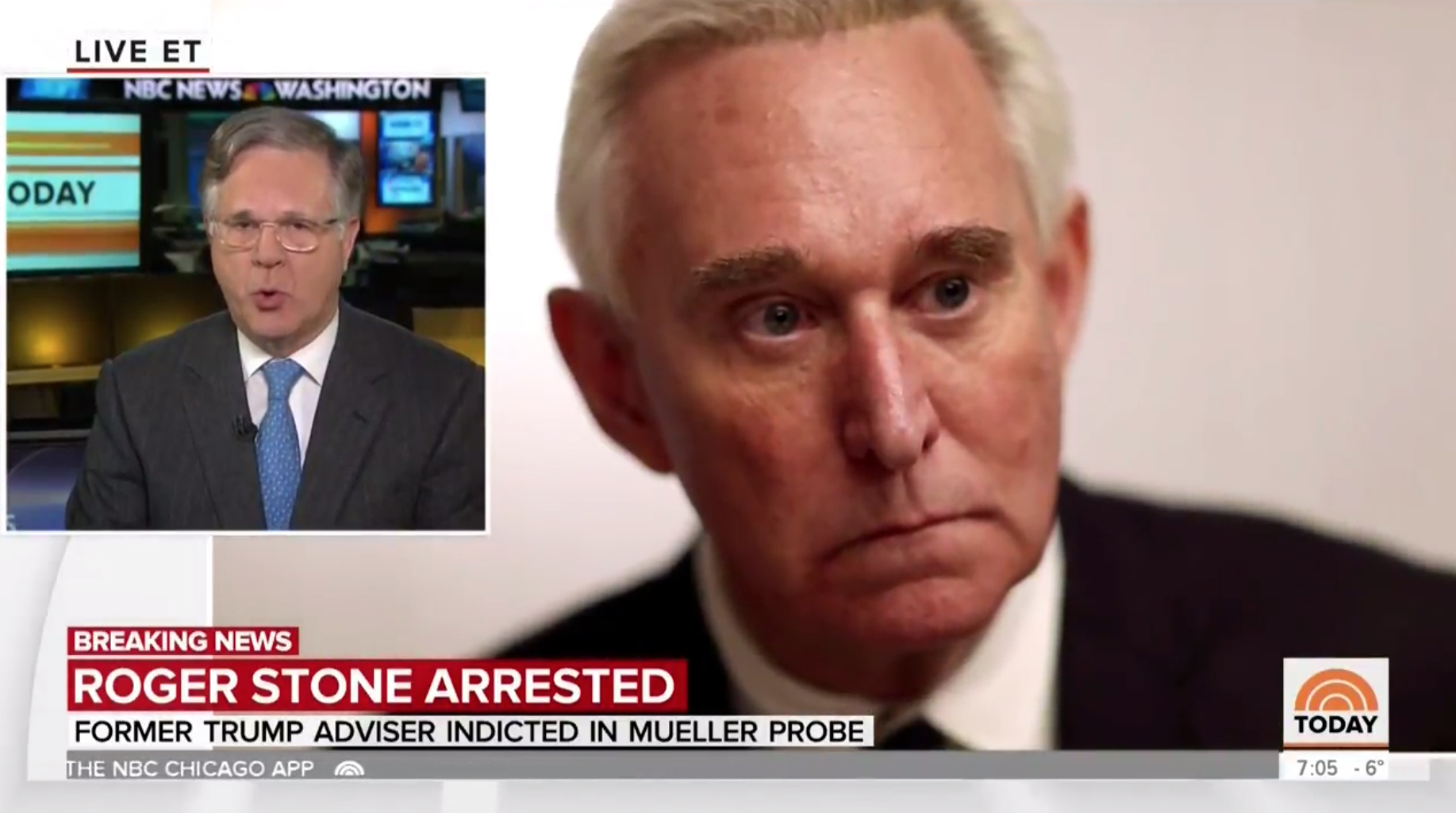 For the remainder of its coverage, NBC relied heavily on slideshow loops of photos of Stone, presented using the ‘Ken Burns’ style zoom effect, sometimes with a small box of the on air correspondent in the upper left side of the screen. Coverage relied solely on live voiceover only reports. 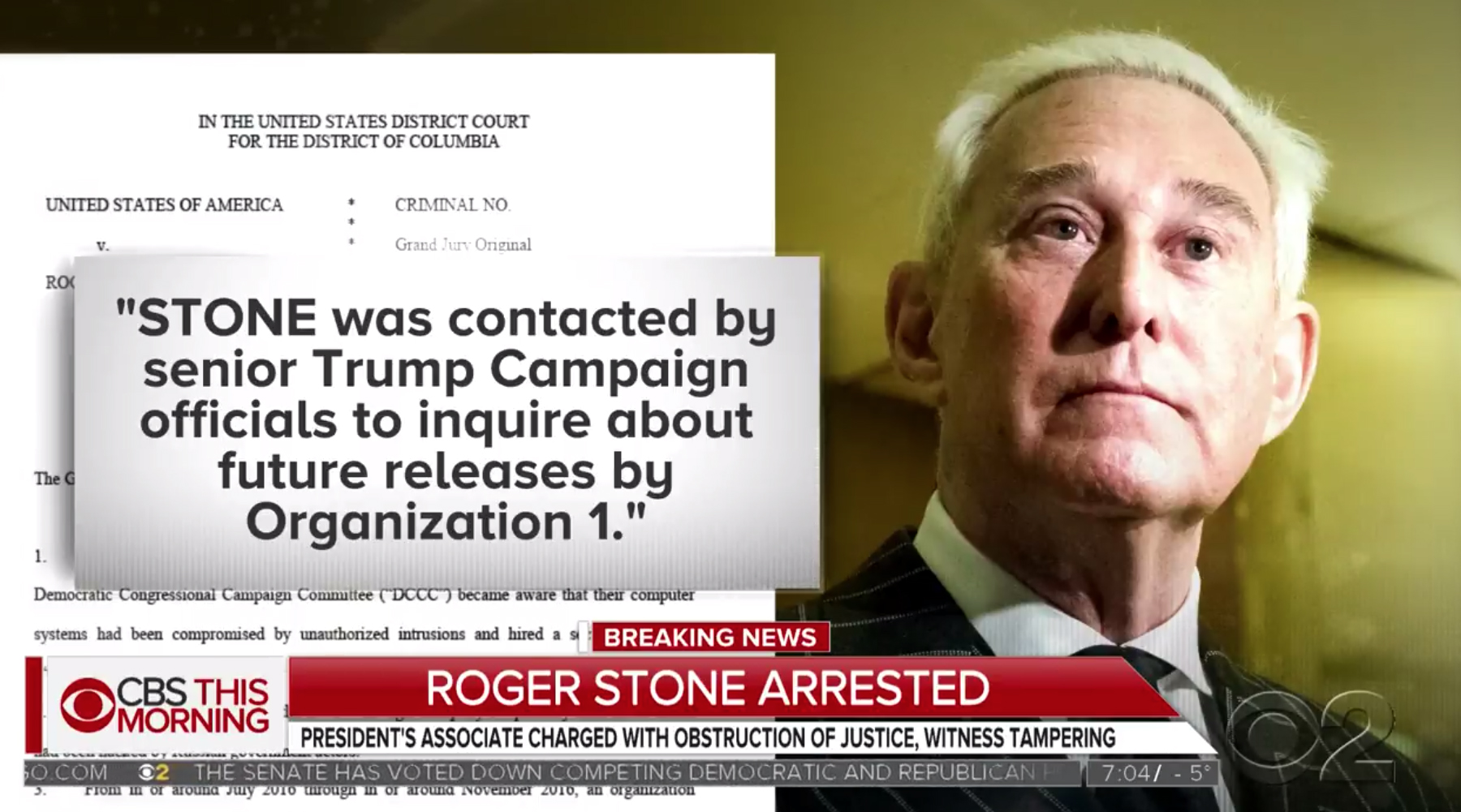 ‘CBS This Morning’ took a similar approach with its live reports and stock imagery, but was able to pull together this pull quote graphic. 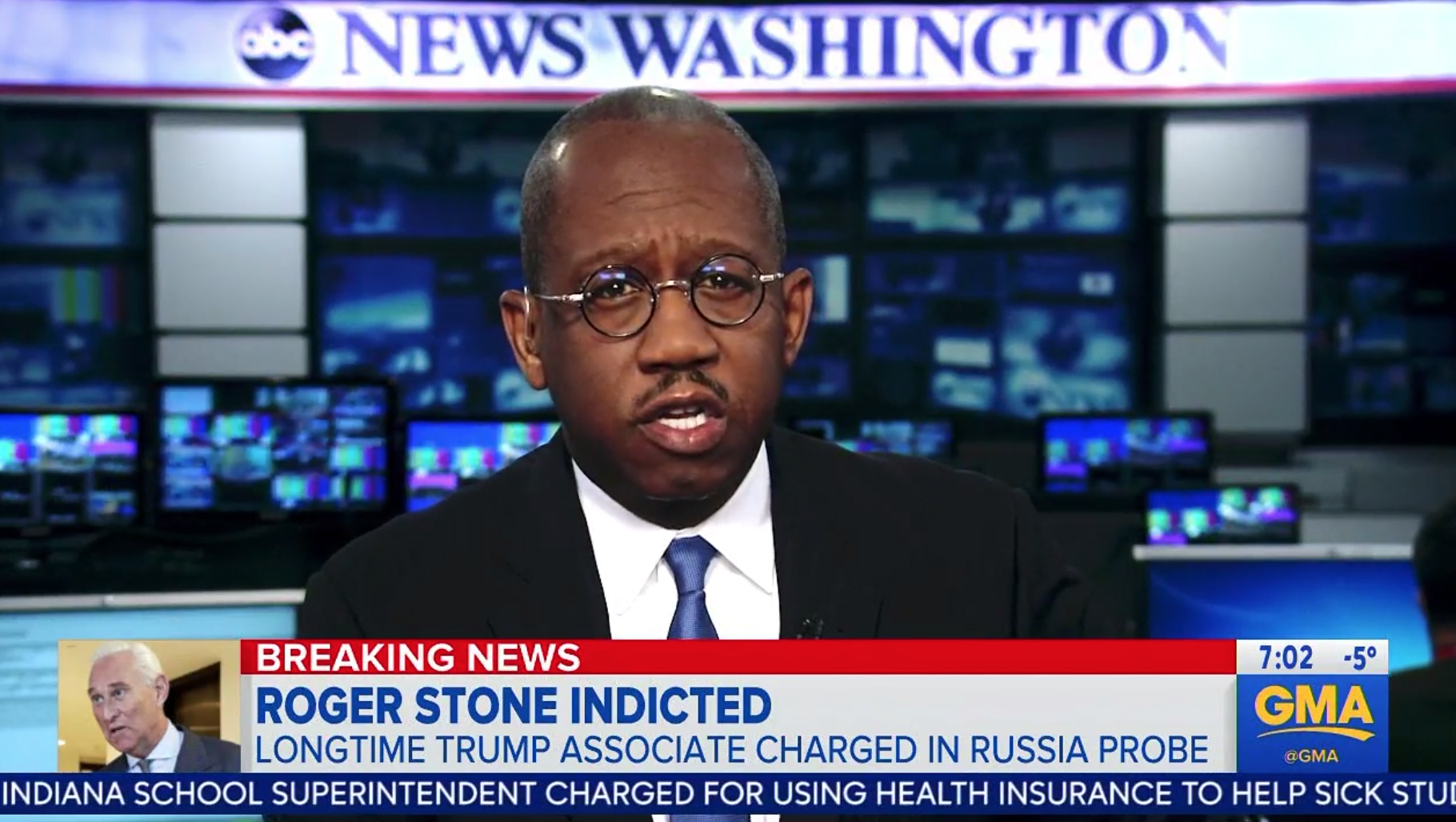 ‘Good Morning America’ followed suit, with B-roll of Stone playing either full screen or next to the live shot of its correspondent.

As the morning marched on, networks were able to deploy their graphics teams to start creating more topical graphics for the story.