Cable news goes big for State of the Union coverage 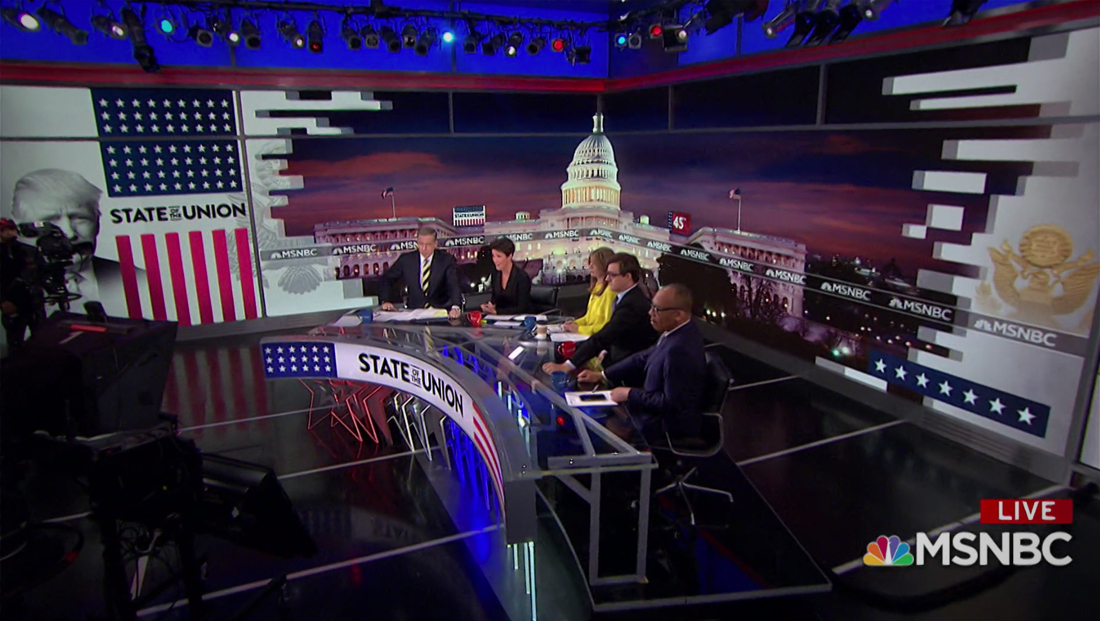 Cable networks offered extended coverage Tuesday, Feb. 5, 2019, for the State of the Union, including several hours of what amounted to “pre-game” coverage.

MSNBC had Brian Williams and Rachel Maddow sitting in the corner of the MSNBC side of Studio 3A with a dramatic image of the Capitol behind them.

Other either side of the video wall, as the LED panels ended, staggered-blocky “cutouts” were used to create the feel of two solid walls that morphed into a view of the Capitol. One side of the simulated white-ish walls features the NBC State of the Union logo while the other included a presidential seal icon.

.@BWilliams and Rachel @Maddow's background mirrored the one used during the 2018 elections — two faux "billboards" were added on either side — one reading "#SOTU" and the other with a large "45" pic.twitter.com/yqo3DGOTkr

Of note, NBC digitally inserted “billboards” over its anchors shoulders that appeared to be perched on the top of the Capitol wings or somewhere nearby, similar to what the network did on election night 2018 with its floating number boxes.

Nice used of the curved LED segment on the MSNBC set https://t.co/ImAT69Htaf

The network also used its additional video ray, including the curved element and freestanding monitor, during coverage.

Here's Fox's setup for the #SOTU coverage — with the Capitol in the background pic.twitter.com/smFknVweFP

Fox coverage was from the same building that normally houses NBC’s and C-SPAN’s operations as well. Unlike NBC’s studios, however, Fox did not suffer any damage.

Martha MacCallum and Brett Baier co-hosted the network’s coverage with a view of the Capitol dead center behind them.