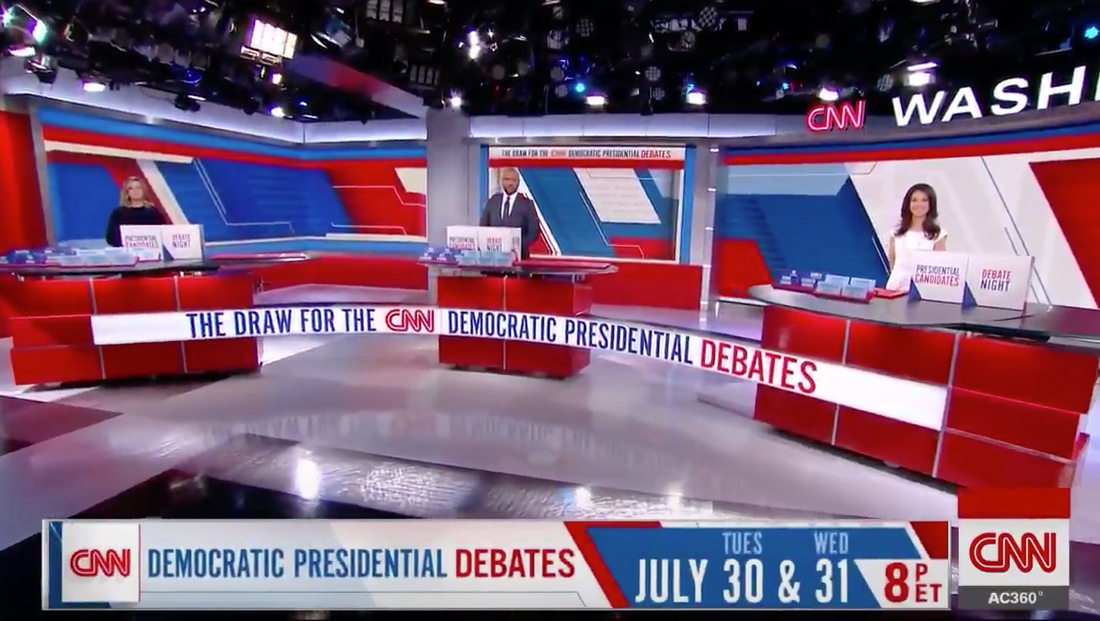 CNN presented its rather long and drawn out “behind the scenes look” at the process of building a candidate lineup for a debate Thursday, July 18, 2019 — in a decidedly low tech way.

“The Draw for the CNN Democratic Presidential Debates” aired live at 8 p.m. eastern from Washington, D.C., as a special hour of “Anderson Cooper 360.”

Billed by CNN as an effort in “transparency,” the hour-long coverage was criticized for being a ratings stunt.

Others compared it to a game show, home shopping broadcast or sports drafts, which are often lavish affairs.

CNN grouped candidates into three draws based on polling data, with the pool ultimately being split into two groups of 10 — one for July 30 and one for July 31.

The network conducted the draw in reverse order of popularity, with the first group of 10 representing the lowest polling candidates, while the second featured the next six highest and the final one the four top polling candidates. 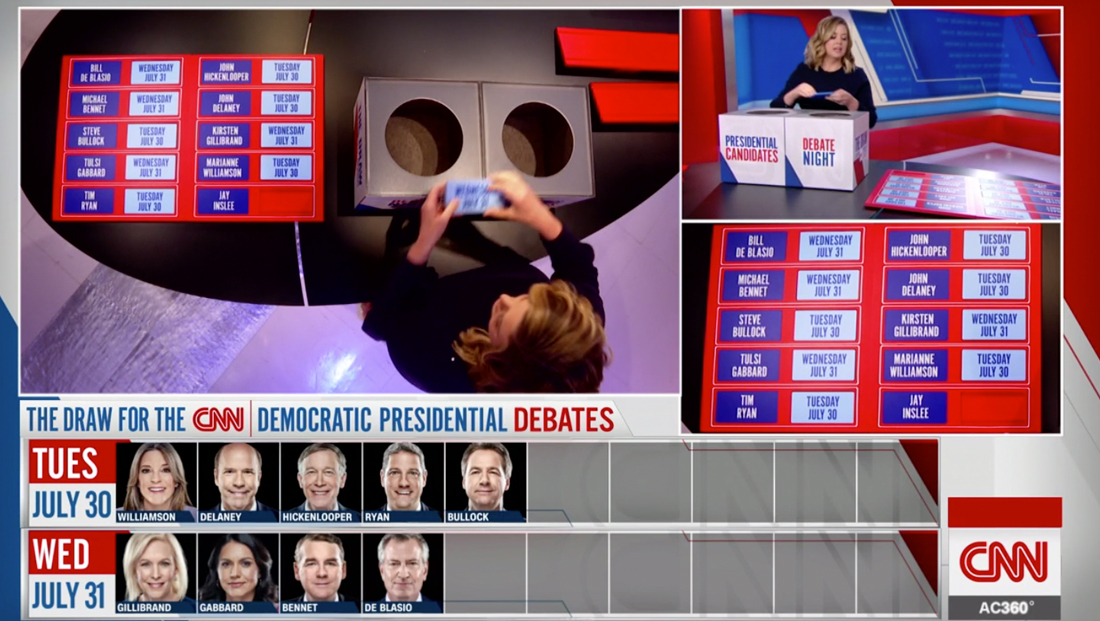 Despite CNN’s penchant for high tech virtual sets, augmented reality and “magic walls,” the network stuck with “real” methods for the draw.

Three CNN anchors performed the actual draws, using thick cards with candidate names and dates on them in a red, white and blue color scheme.

Also used were bold red display stands and trays with depressions for the cards to be placed in as they were taken from the cardboard boxes — creating a physical record of the draw.

CNN also updated, in realtime, a graphic running along the bottom of the screen as each night filled in.

The lineup for CNN’s Democratic debate will be set tonight by a random, three-part draw. CNN's Wolf Blitzer explains how the live draw will work. https://t.co/SI5iaWxbj2

CNN also helpfully provided multiple camera angles of the drawing, including overhead views, in the name of transparency.

One of these views gave viewers a glimpse into the boxes, while CNN advertised the anchors couldn’t see in them when they drew names or dates.

Cameras also provided coverage of the entire table surface — presumably to demonstrate no cards were added, removed or otherwise manipulated.

Other efforts to make the drawings were fair included:

One thing CNN did not leave to the odds was the placement of candidates on the podium. Candidates were assigned lectern positions based on polling data, not by draw.

It’s worth noting that performing a drawing using the methods CNN used, as opposed to computerized approach, created as drawing as close to being truly random as possible.

Any sort of electronic or virtual drawing would likely have relied on a computer to pick elements “at random.”

However, computers cannot generate truly random numbers because, in order to pick a “random” number, the computer needs a starting point.

Computerized “random” draws can rely on anything as simple as the date and time the drawing started or something more abstract such as radio waves to generate that data to start with.

The latter approach is considered to be much more “random” since it relies on something that’s more unpredictable — though it still, technically, isn’t truly random.

While “random” numbers generated by computers can be very close to being truly random, it’s not the same as pulling cards from boxes.

A computerized approach would have also, almost by definition, cut down on viewer trust in the process since, unlike the physical cards and boxes, there may not be any physical evidence to illustrate the drawing was fair.

Other networks typically rely on physical elements such as cards and boxes when drawing names for events such as debates.