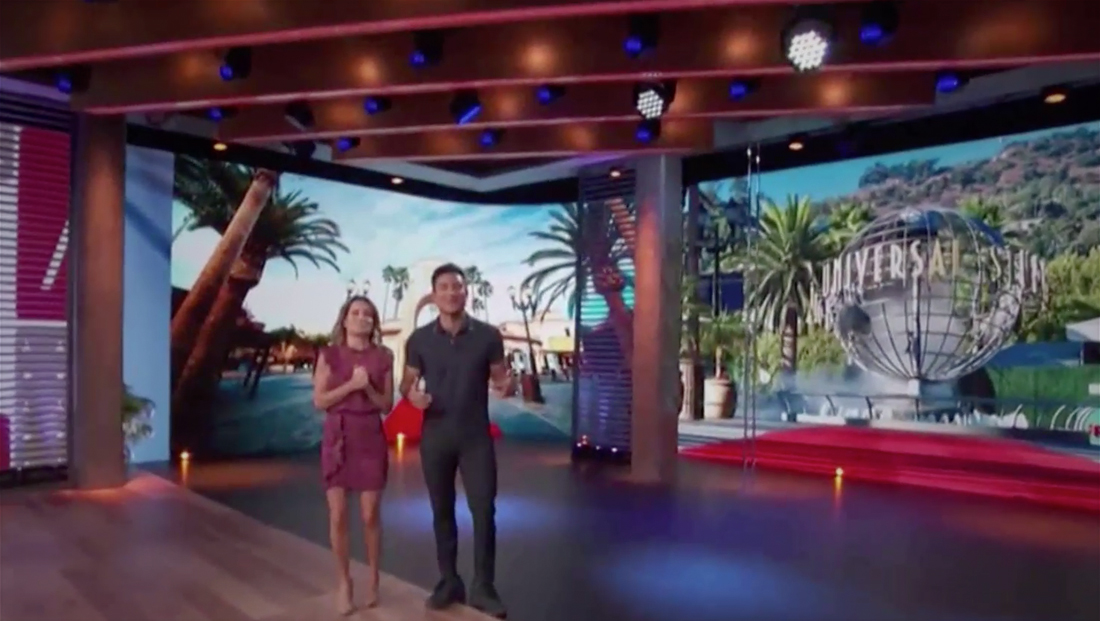 Thanks to the studio’s massive wraparound video wall, “Access Hollywood” was able to use a different look that still incorporated elements from the other show.

The show, which added Mario Lopez as host, starts off with a “walk and talk” preview that takes full advantage of the video walls to showcase imagery of celebs — along with 3D lettering inserted over the handheld shot.

For the opening view, the set shows a stylized panoramic view of Universal Studios Hollywood.

“Access Hollywood” is produced by NBCUniversal owned KNBC so the two brands are corporate cousins and tie-ins between the show and theme park have been used in the past — and continues to be used.

Thanks to the set’s color changing elements, the deeper maroon used in the show’s new logo design shows up in the internally lit ceiling beams, while a bright teal color, similar to that used on “Access Daily,” is used as an accent color on the flagship program.

Meanwhile, decorative items from the open glass and metal shelving as well as some of the on-set greenery was removed, while the uplighting on the slatted panels was more subtle.

While primary hosts Kit Hoover and Lopez start off the show from in front of the spot where the video wall dog legs, co-host Scott Evans and correspondent Sibley Scoles, appearing in studio, were able to have their own area off to one side in front of a topical video wall graphic.

There was a brief glitch that showed up as the camera pushed in on Lopez and Hoover when the left portion of the video wall briefly went black and then switched to Evans’ and Scoles’ background.