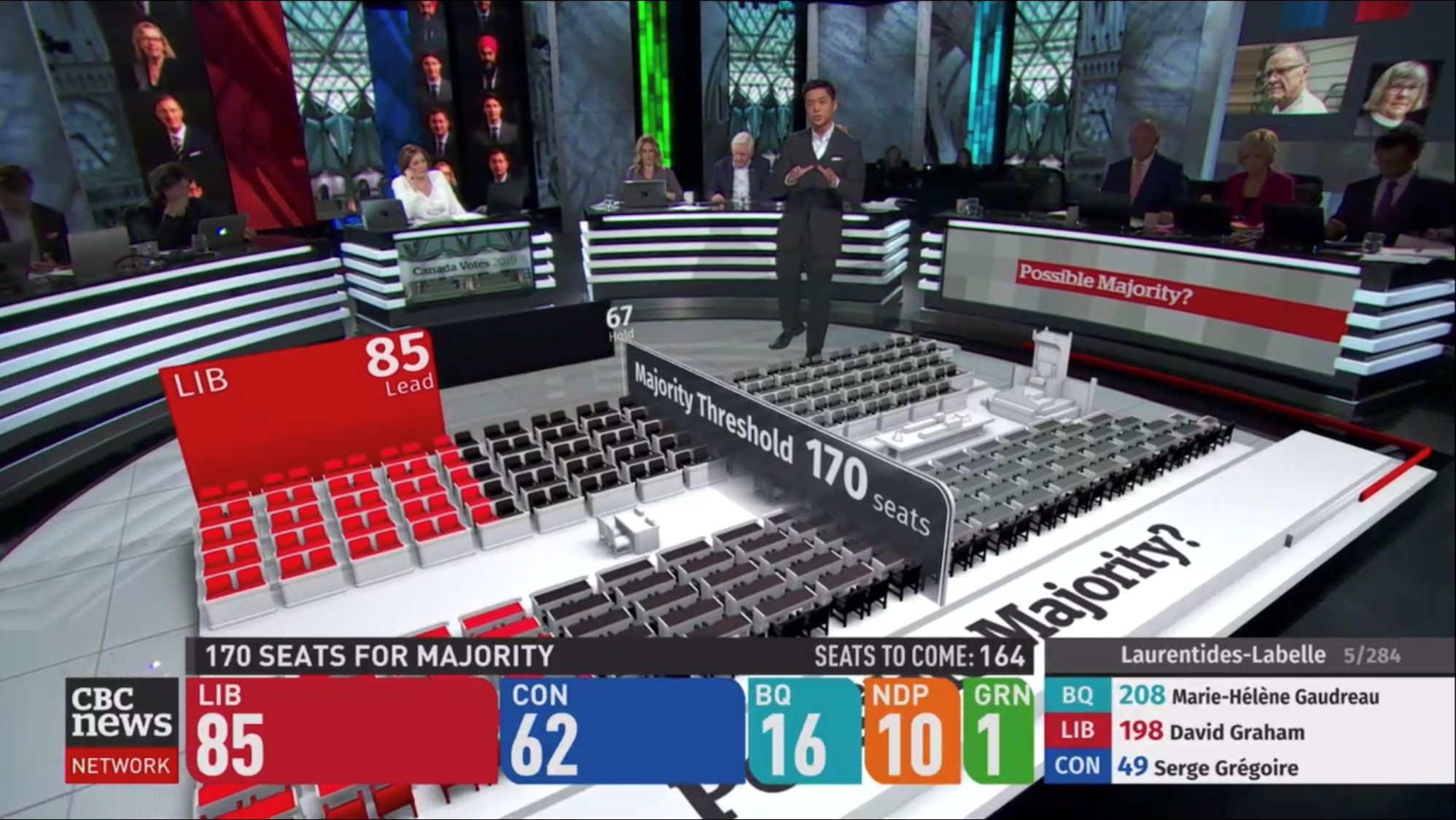 Election night results directly impact millions of citizens making the newscast one of the most important and compelling news productions on television. In today’s fragmented media landscape, viewers are not only looking for “who won”, but also for insightful commentary and context on how the results will affect them at the local, provincial, and national levels.

On the October 21 Election Night, viewers were treated to a visually stunning display of graphics that featured 3D representations of party leaders, the House of Commons, and Canada’s iconic Parliament. The rich AR graphics provided real-time results such as Share of Votes, House of Commons results, and Party Standings for the top political parties. Instead of just displaying traditional elements such as graphs or full-screen text graphics, the on-air newscasters had the ability to interact with lifelike 3D animations that appeared almost magically from the election studio floor. The AR graphics were made even more realistic as the AR scenes were in synch with live camera moves and LED floor, giving viewers a truly authentic perspective. This integration of data-rich graphics within the election set, with presenters and political analysts commenting on the live results, is both a technical and storytelling innovation – the on-air talent continues to have a conversation with the viewer, with the immersive visuals contributing to the conversation in an organic manner. It simply provides viewers a much more compelling newscast.

All major candidates were filmed in the CBC studios with their favorite walk-in preparation to be integrated into the Augmented Reality imagery and be presented virtually at any moment of the night. 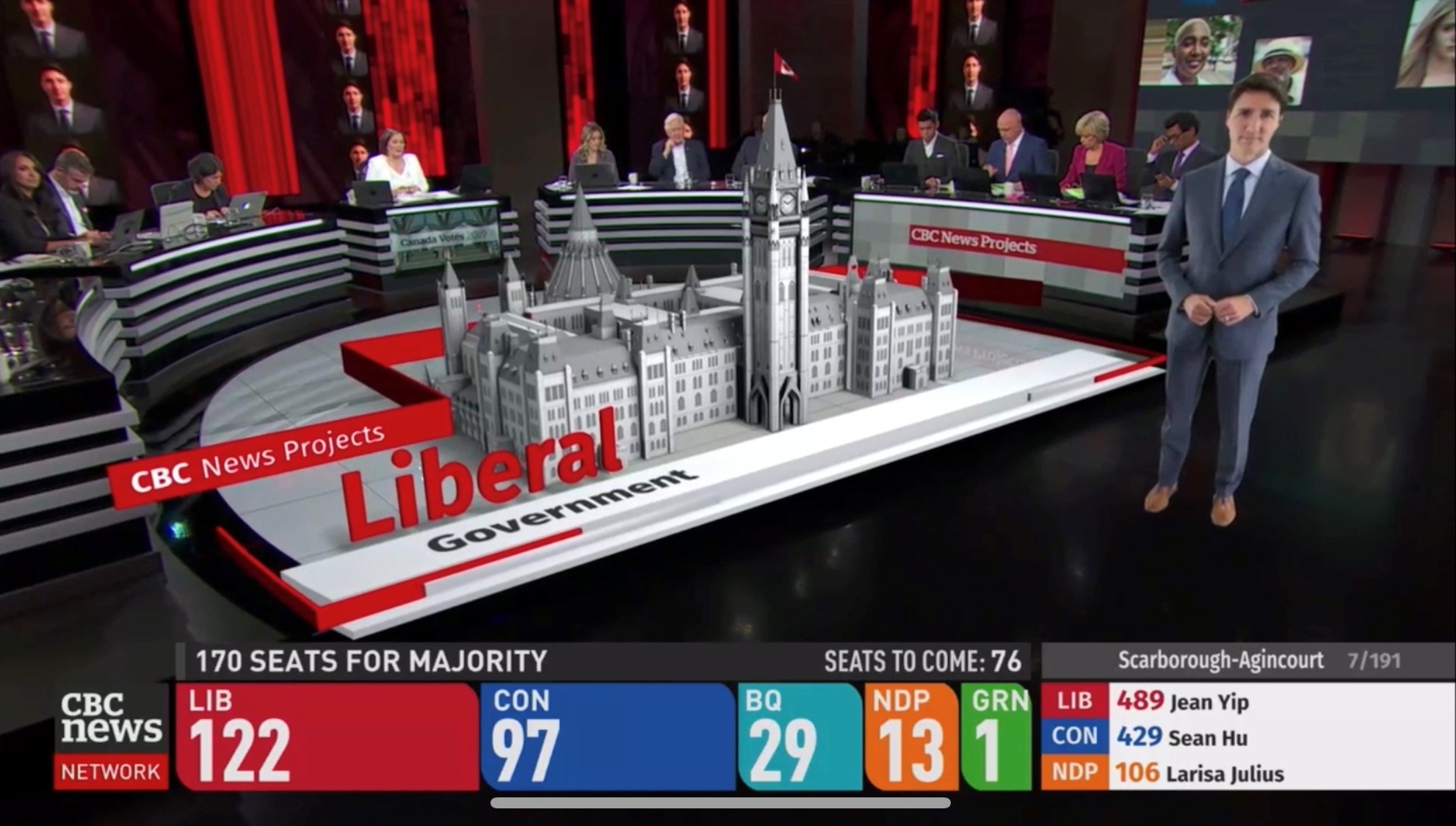 How did we do it? Astucemedia used several technologies, including real-time graphics systems from Vizrt, whose technology helped rendering the graphics creating the impression that the 3D elements featuring live election results data were growing from a real physical floor. Prior to Election Night, Astucemedia worked several months with the CBC team to develop many ideas and conceptual designs and build the graphic templates which would later be populated with actual voting results. Astucemedia also created and incorporated all the required programming logic so that, for example, a seat in the House of Commons AR graphic would automatically turn red if a Liberal was voted in.

“For our 2015 Federal Election coverage, we launched Augmented Reality graphics for the first time to help tell the story as the evening unfolded. Astucemedia was instrumental in that success. So when we started planning for this election, I knew that we needed to work with Astucemedia again to help us bring our AR graphics to the next level. Their expertise, design skills and commitment to the project gave us a presentation style that was not only leading-edge, but, provided unprecedented added value to our audience”, said Melissa Mercer, CBC Senior Manager, Graphic Design and Specials.

Astucemedia also worked with Stype, the provider of camera tracking solutions, whose technology provided accurate camera information to control virtual cameras. The graphics were developed and tested in Montreal’s Astucemedia Virtual Lab on the same equipment as the CBC for tracking and rendering.

“We deliver productions all over the world but it’s especially gratifying to work with the CBC in our home country to deliver another stunning AR production for Canadian elections”, said Alexandre Leclerc, CEO of Astucemedia.

“The quality of storytelling improves dramatically when on-air talent can interact with data-driven AR graphics. Being a part of the story is one of the best ways to tell it. It was a pleasure to work with CBC’s team to deliver yet another visually captivating newscast that pushes the envelope. A lot of networks these days are using AR just for the trend of it and only to “WOW” the audience, while CBC’s main concern was more about how to better explain the incoming results with proper data visualization.

Astucemedia has other upcoming mandates for CBC that include augmented reality and is involved with few major networks for the upcoming U.S Primaries and U.S General Elections in 2020.

Astucemedia contributed this project case study to NewscastStudio for publication. If you have a project or product that might make a good case study, contact us.