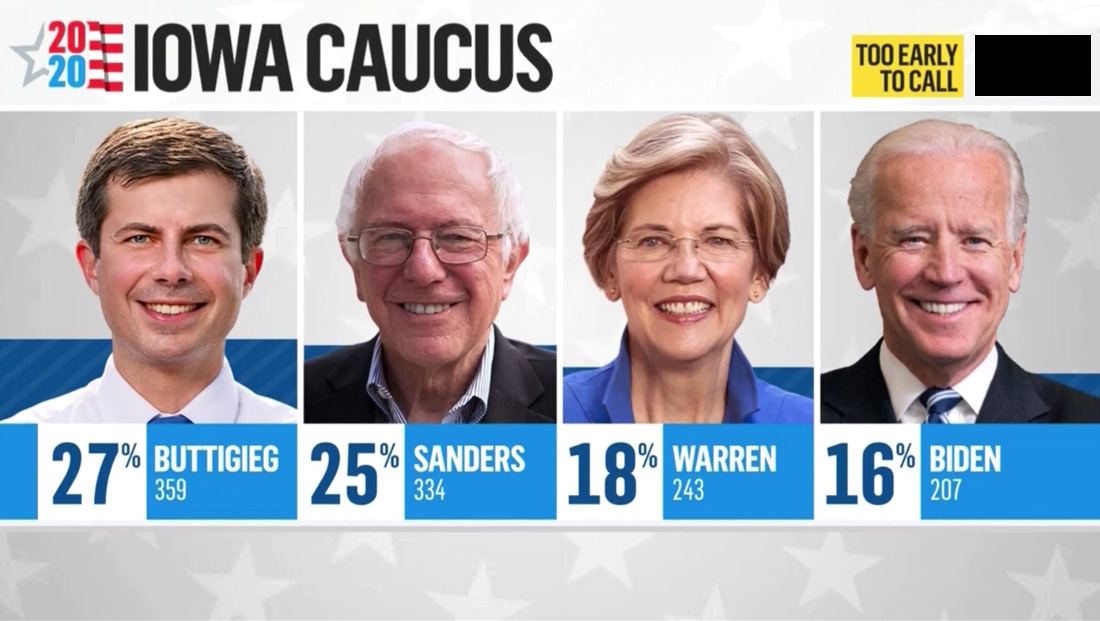 That turned out to be only partially true — with only about 62% of precincts data released after a brief press event in Iowa.

It appears that shortly after that event ended, the data was sent out and presumably absorbed into networks’ real time graphics systems.

It appears that most of the networks’ graphics systems weren’t prepared for a “partial data dump,” with many of them inaccurately showing that 95 to 99% of precincts were reporting.

For example, and in the interest of full disclosure, we’ve blacked out the “99%” in notation on the NBC News graphic above to avoid any confusion.

This was most likely driven by the fact that the systems were assuming the 62% of data the Democratic party released was all of the data.

All of the networks made verbal on air acknowledgments of the erroneous notation and some were able to intervene and fix the number.

The network’s “Election Update” open ran and then correspondent Terry Moran appeared on screen briefing, with audio from the Iowa press conference in the background.

Then the view switched to Tom Llamas in Iowa at the event, who could be heard talking softly and eventually tossing to the speaker — who viewers had (sort of) been hearing all along.

Later, the network announced the data had come in and read out the numbers on air with a large graphic of the top finishers — but without any data in it. Shortly after, it came back to the screen, this time with data filled in.

CBS also had a bit of bumpy start for its special report when anchor Norah O’Donnell tossed to Anthony Salvanto, the network’s election and surveys director for an update.

The control room cut to a camera showing Salvanto hunched over a desk issuing what appeared to be commands with a headset on but apparently unaware he was on the air.

The network briefly transitioned to “road ahead” to New Hampshire’s primaries — before cutting back to Salvatato, who had by this time relocated to the touchscreen set up in the old Studio 47 that CBS transformed into its “news hub” and was specially decked out for election coverage.

Fox, meanwhile, was in the middle of “The Five” and spent a bit more time dwelling on the mess the democratic party created — including from left leaning host Juan Williams — before switching to the hard numbers.

In fact, Williams was still talking about the optics of the computational mess up when the ticker started showing initial numbers. He was eventually interrupted and the network shifted to start reporting the data.

Editor’s note: Although we rarely edit graphics and strike to show them “as they aired” we made the decision to obscure the part of NBC News’ graphic used at the top of this story that inaccurately cited 99% of precincts reporting, an error NBC acknowledge on air. We have also added disclaimers about this error on all associated video clips’ descriptions.