Column: Coming to a live production near you, remote teleprompting

Thanks to IP-based workflows, remote teleprompting is more feasible and attractive than ever for live production. Advances in teleprompting technologies are now ensuring the necessary immediacy, latency, and reliability for a successful live broadcast. At the same time, these solutions are delivering on the IP promise of reduced costs, greater flexibility, and enhanced efficiencies that result from pooling prompting resources across large network geographies.

The last couple of years have been big ones for high-profile remote integration (also known as REMI) sports productions, and advanced IP-based prompting systems have played a key role. With the approach of this summer’s next international football tournament, which will be hosted for the first time across multiple countries, it’s worth reflecting on the REMI success of the last one – the football event held in Moscow in 2018. For the 2018 tournament, matches were spread across 11 cities, 12 stadiums, and four-time zones.

Such a large and geographically distributed event creates huge logistical headaches, not the least of which is how to move people and equipment from one location to the other. At the same time, broadcasters’ budgets are squeezed like never before, and they’re facing a constant and growing requirement to produce greater volumes of content with fewer resources.

REMI is a powerful new approach that directly addresses these challenges. In principle, REMI reduces the number of crew members needed on location and allows more people to help run a show remotely from a broadcaster’s fixed facility. Fueled by the growth of IP-based media networks and operations, REMI enables the broadcaster to take better advantage of all its technical and human resources and increase both its production efficiency and output.

That’s why IP-based prompting is such a perfect application in a remote broadcast setting. In the case of the 2018 global football event, one broadcaster deployed Autoscript’s Intelligent Prompting workflow across two continents. The broadcaster installed two prompting setups, one at HQ and one locally at the event. The local operator at HQ prompted the script for both locations, enabling the two sites to share a single resource efficiently. A backup PC was installed at the international broadcast center, but it sat unused for four weeks. The broadcaster’s biggest challenge was how to improve the latency of the audio signal, because the latency of the prompting feed was almost undetectable. A good problem to have!

In such a prompting setup, integrating local and remote productions becomes seamless, with the option for one operator to prompt for multiple studio locations. This means, for example, that highlight shows from a local HQ can include segments from a remote studio and control the script for all locations.

Obviously, latency must be kept to an absolute minimum to enable this degree of prompting immediacy. Even a tiny delay (say, two seconds) can cause problems – if the talent is viewing the script two seconds later than it was actually rolled by the remote operator, the two can get out of sync. Then the operator must compensate by offsetting the speed at which the script is rolling.

One approach for reducing prompting latency is to send small unicast data packets over the network instead of the full video feed. With only small amounts of data traversing the network, every prompting monitor can remain in constant communication with the master application to ensure reliable synchronization. Rather than all monitors relying on a single video stream from a video generator – a single point of failure – each monitor on the network renders its own script video. This avoids the bandwidth, latency, and synchronization issues that can arise with full video-over-IP solutions.

Redundancy for any failure

A backup that can take over quickly in the event of a failure is essential for any remote prompting workflow. That’s why IP-based networks are so well-suited for remote prompting – they enable connectivity without requiring point-to-point connections, and therefore deliver core resilience.

A native IP-based prompting solution assures full redundancy by pairing a mirrored PC with the main application. The mirror PC takes over without a hitch if the first PC/application fails, providing automatic synchronization of script position, individual users’ settings, controllers, newsroom connections, and teleprompters. Since all elements of the prompting system are networked devices and therefore not physically connected to each other, controllers in any control room or studio can continue serving prompts from the backup machine, wherever it is in the world. The on-air talent might notice nothing more than a fractional, millisecond pause in the scroll speed.

Well-executed remote prompting enables broadcasters to locate prompters anywhere in the world where there is a network connection. Through intelligent pooling of prompting resources across the network, operators from different locations can stay busy all day prompting different shows – rather than sitting around and waiting until they’re needed. After finishing one show, a prompter can connect to other IP devices and begin prompting a show that is being produced in a completely different location and time zone, anywhere in the world.

When added to the network, all prompting monitors and controllers send out a UDP broadcast that makes them available to any other connected application. All devices are immediately visible to users on the same subnet, and prompters can clock in, ready for action, as soon as they’re booted up on the new network. At a glance, managers can view the status of each prompting device and whether it’s in use. For users on different subnets, port forwarding can enable the same levels of auto-discovery.

The outlook is bright for IP-based prompting to support remote broadcasts of all types. With large global sporting events coming up this summer in both Japan and Europe, the success of advanced, IP-based prompting systems has given broadcasters more confidence than ever in this landmark technology.

While prompting systems of the future will rely on the transfer of data packets rather than full video feeds, there’s good news for broadcasters who still rely on video-based prompting workflows. As these broadcasters continue a phased migration to IP operations, the Intelligent Prompting range from Autoscript offers support – including both video and Ethernet outputs/inputs – to enable video as well as packet-based workflows.

In short, IP-based networks and technologies like teleprompting allow productions to reduce the number of crew members needed on location, enabling more people to run the show remotely from a centralized and fixed facility. With fewer people and less equipment at the venue, broadcasters can lower operating expenses, shorten on-site setup times, and minimize the production’s environmental impact. It’s a win-win for productions, viewers, and the planet.

About
Robin BrownRobin Brown is product manager for Autoscript, a Vitec Group brand. 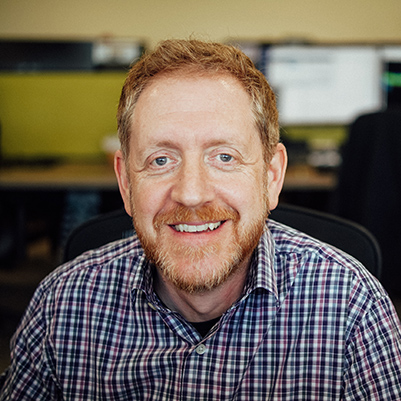