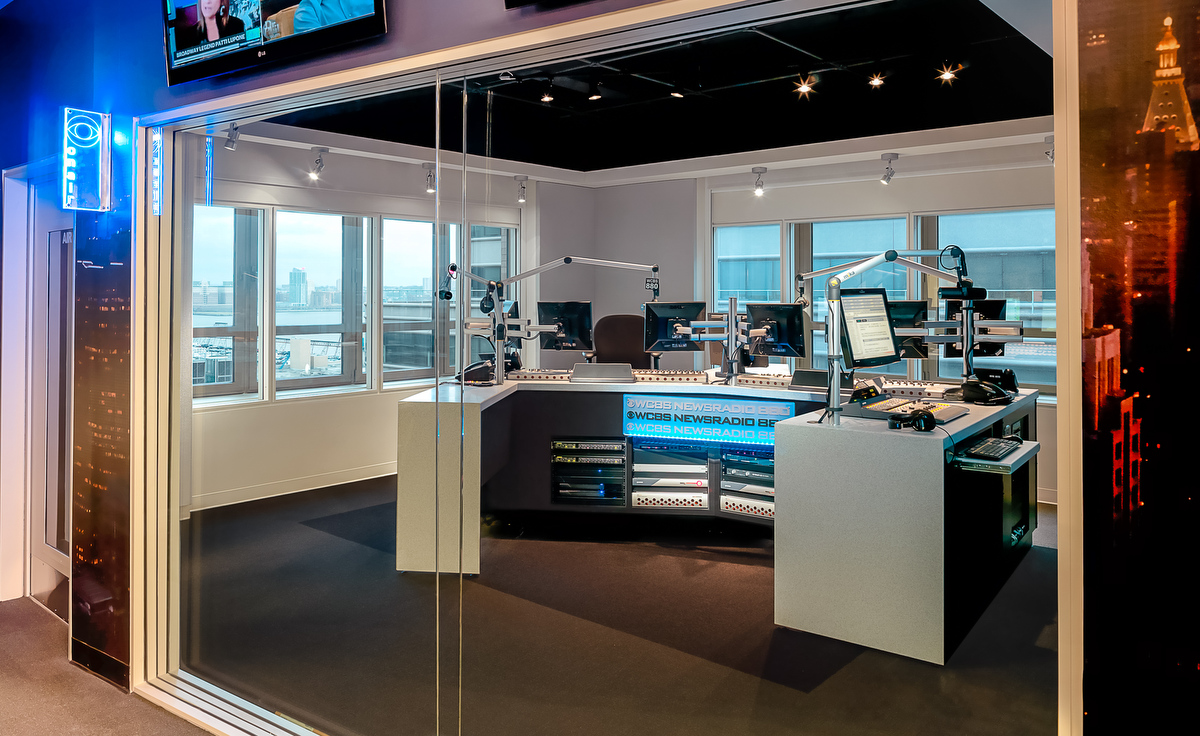 If you ask a radio industry veteran, they will likely tell you that the core purpose of radio isn’t just to broadcast audio signals over the air waves, but rather to make meaningful connections between listeners and artists—or other influential figures—through quality content creation. From this perspective, the mission of a radio station in 2020 is no different than in 1920, yet the revenue models and day-to-day operations have changed drastically. This evolution of the radio industry brought on by the advent of the digital age has resulted in changes to nearly every aspect of facility design.

As the industry continually changes to keep up with emerging technologies, stations have become more modular and dynamic in their design. We refer to this as “planned flexibility”—the idea that the built environment is intended to be gradually upgraded over time rather than completely rebuilt the moment it becomes outdated (which, for most stations, has likely happened in the time it took for you to read this sentence).

So, how did we get here? Looking back to the introduction of the iPod in 2001, we can see that radio stations initially responded with streaming their programming over the internet. This was seen as revolutionary at the time and successfully catered to more digitally-minded consumers. Radio stations never looked back.

Now, nearly 20 years later, radio stations are hardly recognizable in the traditional sense. The convergence of digital media has led to stations producing every type of audio and video content, including regular radio broadcasts, podcasts, live streaming video and audio, digital content for web and social media distribution, and more. This content is then distributed through various channels, all of which are leveraged to produce value for advertisers and profits for stations.

As would be expected, this new model has created massive changes in the staffing of radio stations. Digital content producers, creators and editors all have positions now, along with sales professionals capable of keeping the stations relevant and cash flow positive. All of these people need places to work and collaborate, resulting in radically different office layouts than those of traditional stations.

All of this advancement needs to be considered when designing and building a modern broadcast facility. With more staff members performing more job functions than ever before, the built environment needs to support these functions while still offering a comfortable, efficient, and aesthetically pleasing work environment.

In addition to taking care of the staff, technical infrastructure is a top priority. These environments need to be designed with maximum flexibility in mind, considering that equipment is normally re-integrated every three to five years as technology advances. In order to make this possible, designers need to consider electrical infrastructure from the ground up during the earliest stages of a project rather than retroactively adding connectivity after a space is already built. From the perspective of a station owner or program manager, a flexible and adaptable station that will still be capable of relevance in 10 to 15 years is a worthy investment considering the upfront cost.

As the primary production areas of most stations, content studios have been designed and built-in flexible configurations that allow new microphones, consoles, monitors, and other equipment to be easily replaced over time. 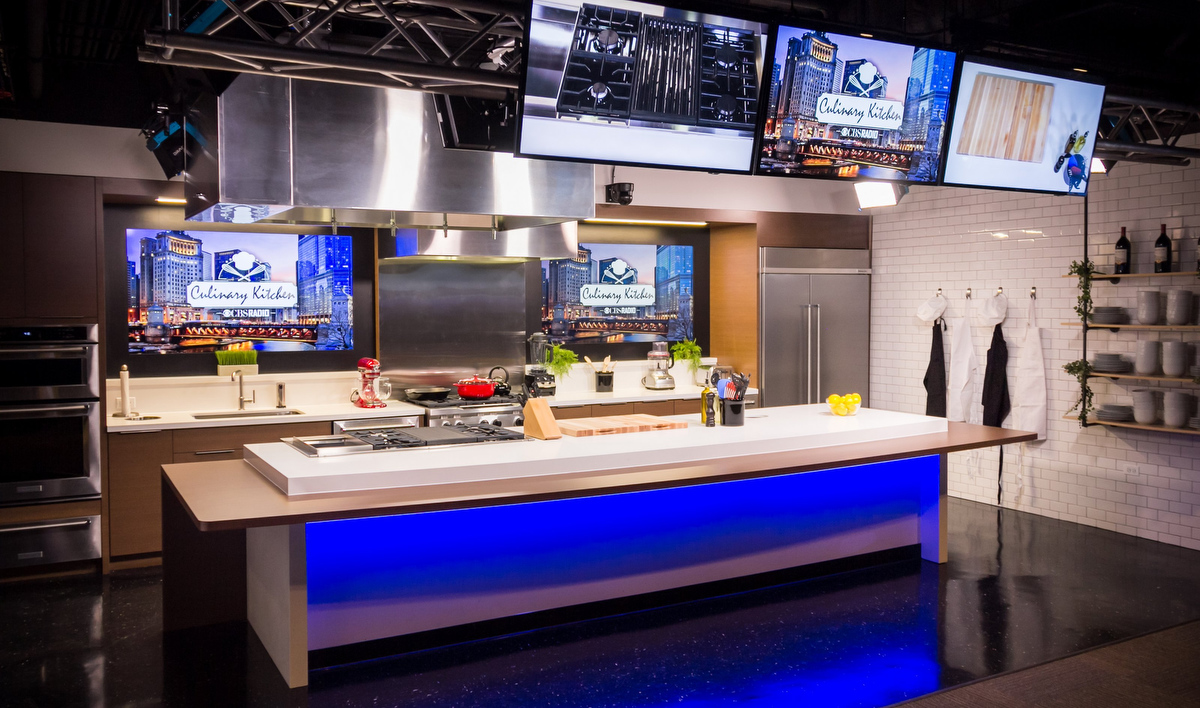 A camera-ready kitchen set for CBS Radio in Chicago.

Infrastructure and connectivity throughout the stations allow employees to create various content—from audio to video and everything in between—in a seamless workflow. Performance studios capture both audio and video to produce both radio and digital streaming content for a variety of audiences.

Offices for staff members are also designed with maximum connectivity in mind. Every employee must have access to the technology needed to perform his or her job functions correctly, so most stations now include dedicated spaces like video conference rooms, a/v editing suites, collaborative meeting rooms, and more. 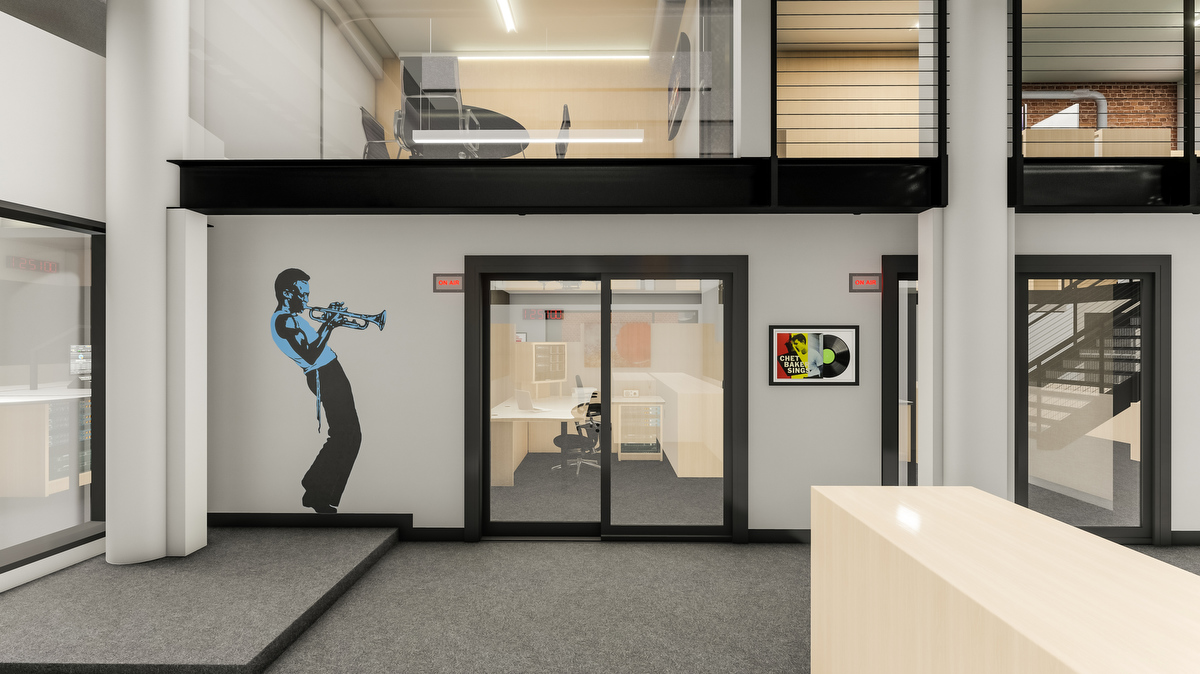 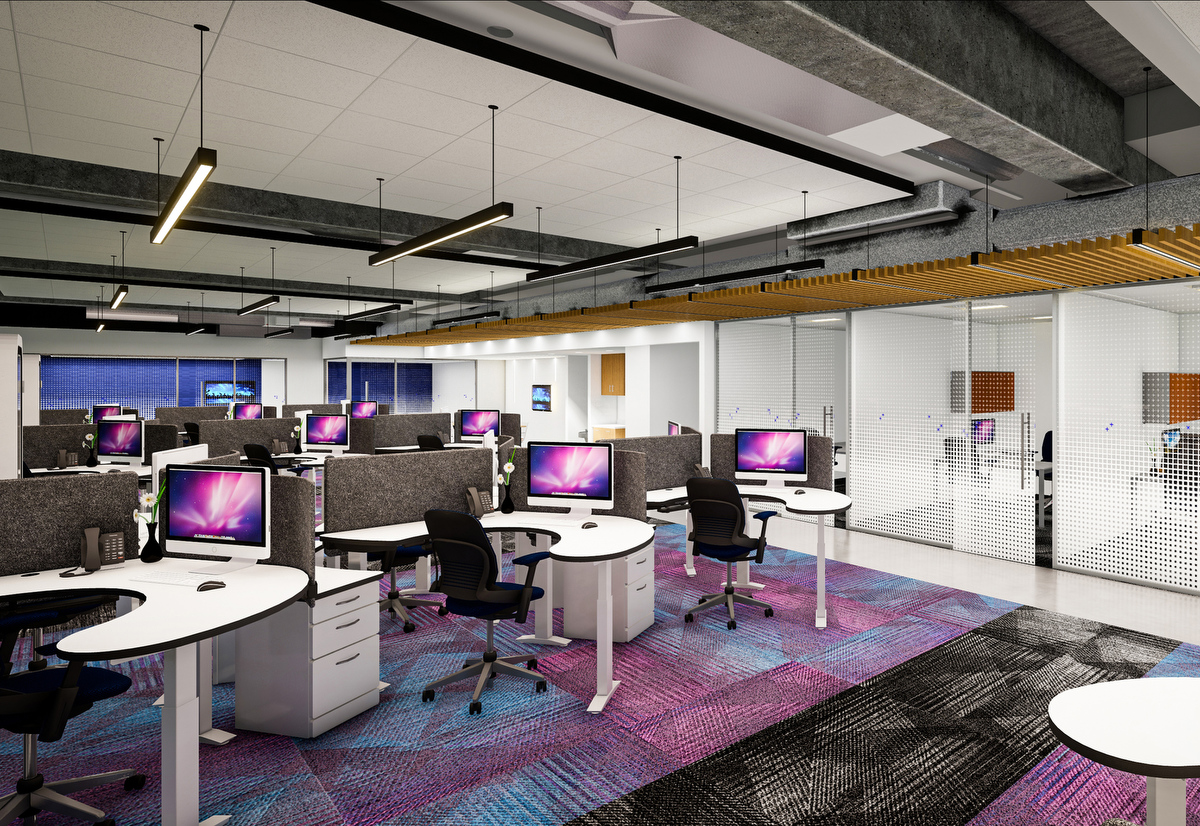 These changes reflect the broader move in modern workspace design towards more open office layouts that place less emphasis on the individual workstation and more on shared productivity areas.

Another crucial component of a modern station is the various support spaces needed for broadcasts to be created properly. From newsrooms where staff members assemble stories and packages for distribution to TOC (technical operations center) equipment rack rooms, radio stations now integrate just as much technology as almost any built environment. 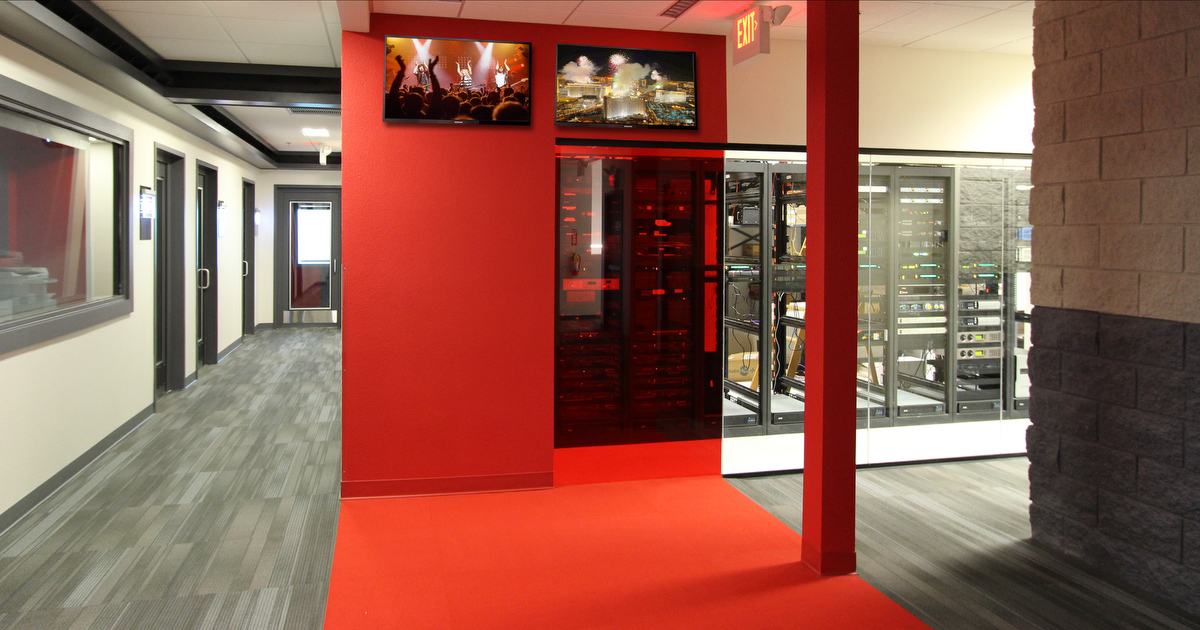 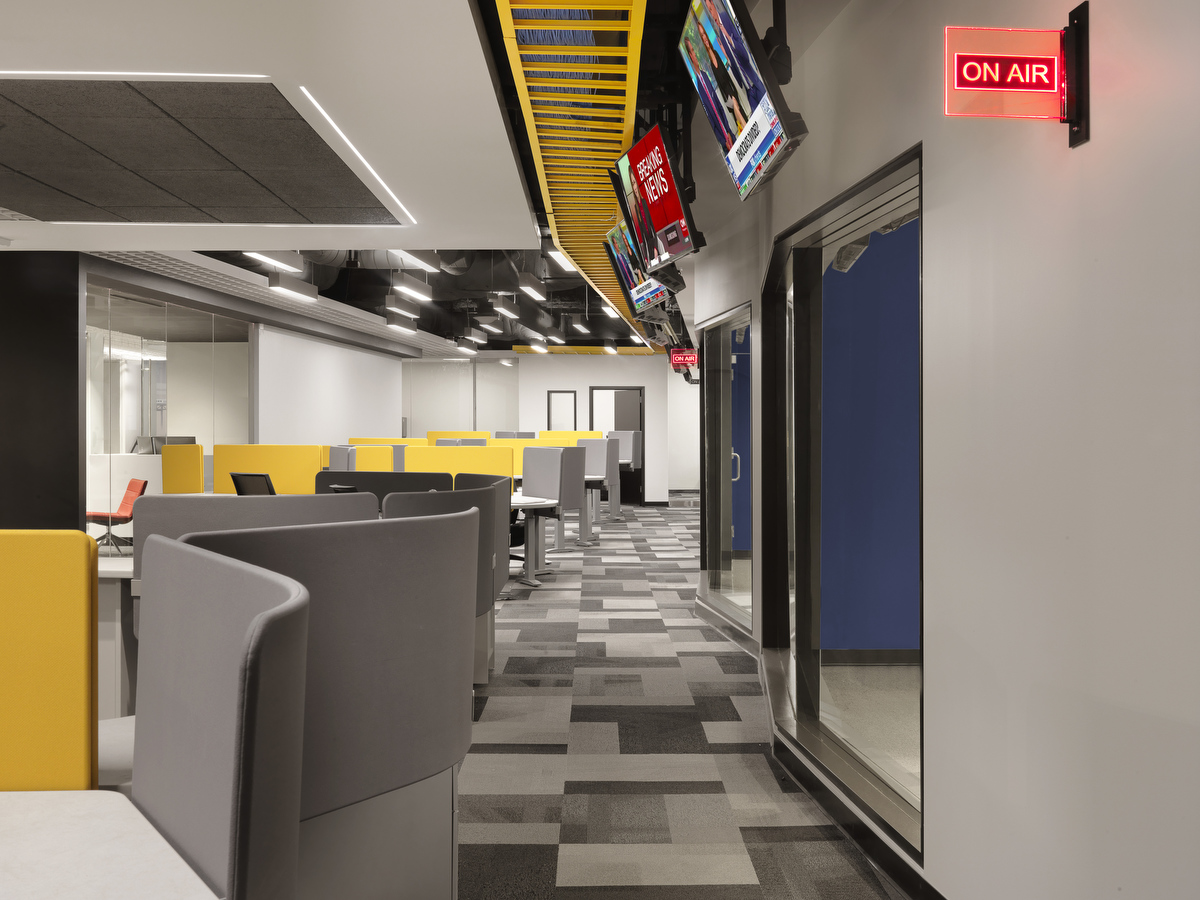 As the industry continues to change and evolve, stations built with intentionally flexible infrastructure and connectivity will be able to remain state-of-the-art, while those with inferior designs will be left repeating a cycle of costly upgrades and renovations. 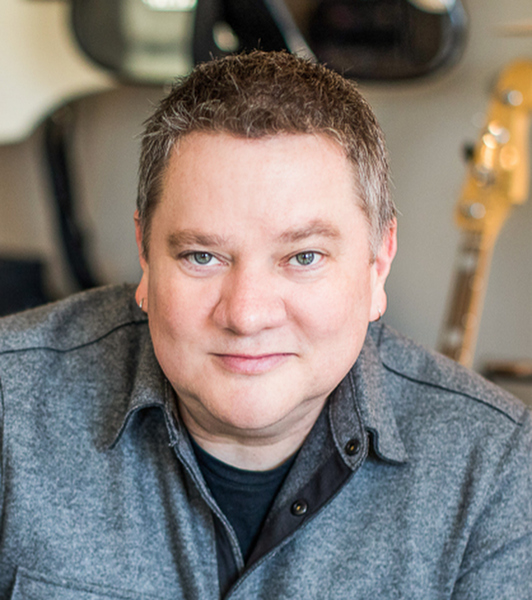