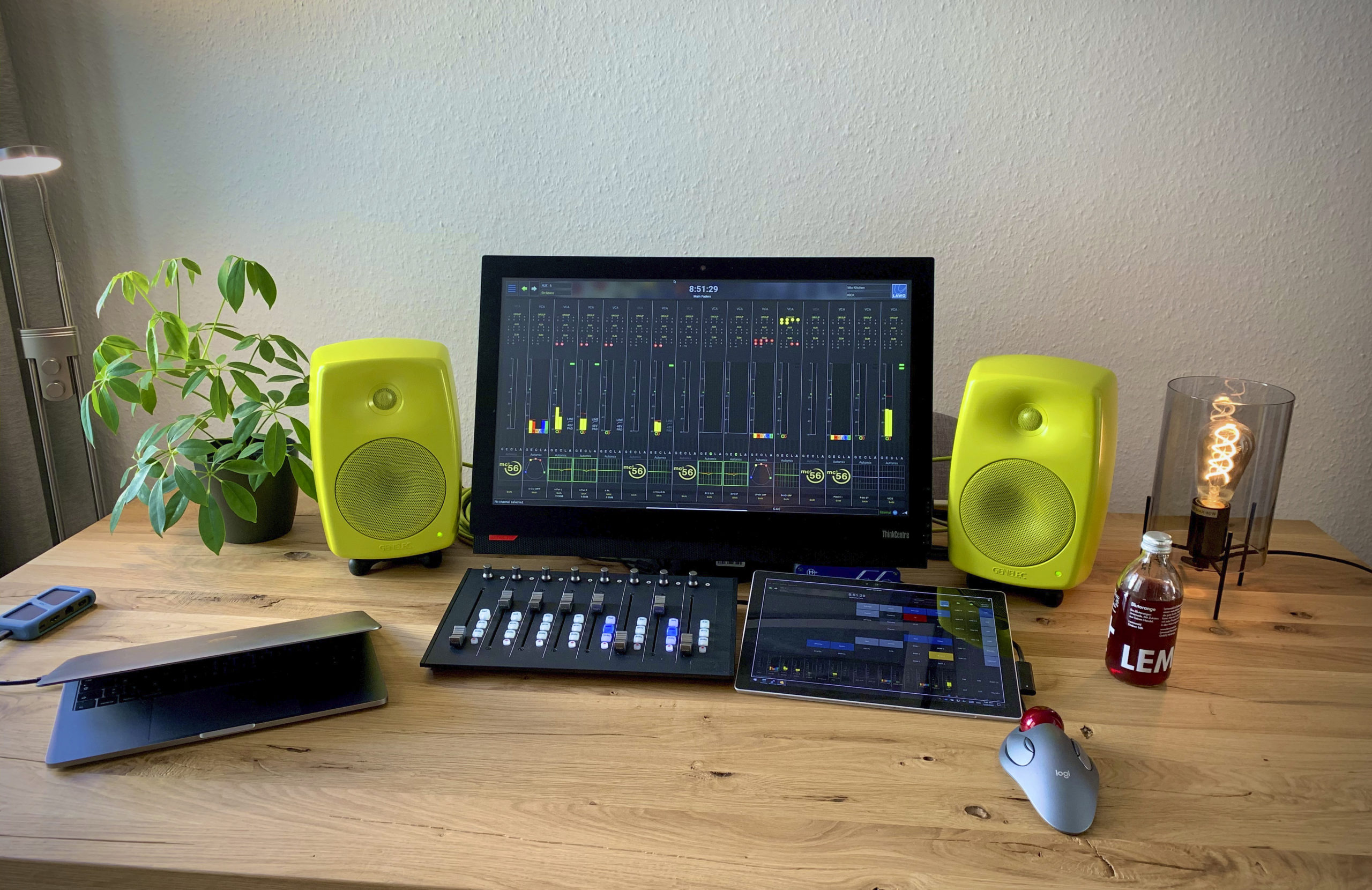 The most important take-away from the pandemic for the broadcast sector is no doubt that open-standards-based IP has become a necessity in scenarios where only half the crew—if that—is allowed on-site, on a good day. Yet, remote access comes in many shapes and guises. And audio engineers in charge of important shows (aren’t they all?) expect total control. Is this possible at all when you’re not at the mothership?

Most manufacturers of broadcast-grade audio consoles would argue that their solutions can be remoted in one way or another. Leaving aside that this says absolutely nothing about the degree of control A1s actually enjoy, there are a few considerations regarding feasibility in a real-life scenario.

The first of these is that remote implies an internet connection. Most users working from home are only too aware of the importance of bandwidth and speed. In some areas, a simple Microsoft Teams, Google Hangout, Zoom, etc., online conference quickly becomes a nuisance if everybody leaves their camera on. What about a large audio channel count that needs to make it to the audio engineer’s location for processing, and then back to the facility in a timely fashion?

The best answer to this is to forget about sending On-Air/TX-relevant audio channels back and forth. Mixing solutions that separate control from processing housed in separate units (console surface and processing core) deliver just that. In a WAN-capable remote setup, this already takes a heavy load off the data flow that needs to travel between the A1 and the broadcast center. Sending control signals from the remote console to the processing core at the broadcast center is a far leaner and more manageable strategy. 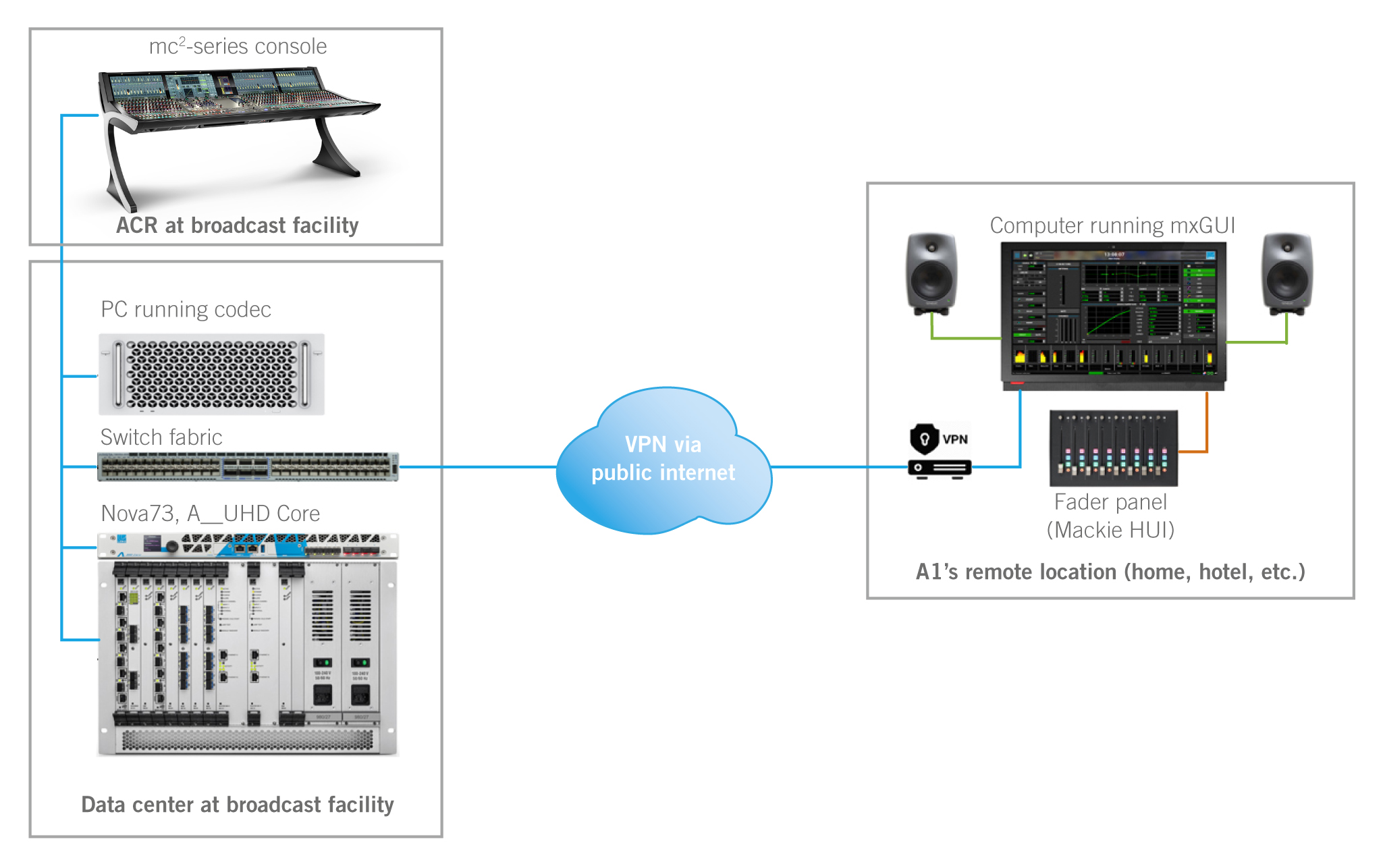 Obviously, the A1 needs to be able to hear the material they are working on and the effect of their tweaks, routing changes, etc. This can be achieved by supplying them with control-room monitoring signals and switching options from the on-premise backend that accommodate several listening scenarios. The channel count for these audio signals is much lower. Plus, they are not critical for the on-air signal—only for the audio engineer’s confidence.

If the audio signals to be mixed and processed never leave the broadcast center, the control-only approach inherently survives short-term internet drop-outs, because your on-air product is not affected. Granted, realizing that your internet connection is down will send the odd shiver down your spine, but at least you can take comfort from the fact that such a quirk only affects you—the show just goes on.

Solutions that satisfy the criteria discussed above have been around for several years. They “only” needed to be streamlined to simplify workflows. This was achieved during a European-wide project that has resulted in the Gateserver product released earlier this year.

The Gateserver philosophy is based on the geographic separation of the control rooms from the backend and on connecting them via a simple internet link. Multiple consoles can be linked to the same backend for compliance with social distancing regulations and multi-operator workflows: one console is operated by engineer A in one city, the second, located elsewhere, replicates engineer A’s moves—fader settings, tweaks, layer and page selection, etc.—and is ready for engineer B to immediately pick up from where engineer A left off.

The ingredients for the real remote work were thus in place. Thanks to an IP connection and the ability of mc²-series consoles and processing cores to receive and transmit control information.

One important consideration for live use remained, however: how to get a control surface to the A1’s home on short notice. Provided, that is, the broadcaster has a spare surface for this application, because ordering one—budget permitting—is usually time-consuming. Plus, the audio engineer may not have enough space at their place or hotel room for a large console and processing core, to begin with.

Wouldn’t it be nice if the professional remote scenario also worked with compact tools? The good news is: it does. A tablet, a desktop computer, a touchscreen, any HUI-compliant, inexpensive, fader panel and a codec are all you need to be up and running.

Obviously, the number of channel faders that can be controlled simultaneously is restricted to 32, but channel groups can be switched in a snip. Tweaking takes place on the touchscreen connected to the computer. All of these actions control the processing core at the facility.

To quote an engineer who has worked with such a setup: “An instantaneous response is impossible due to the nature of any remote connection, but an audio engineer does not ‘feel’ this lag. In my case, latency was never an issue.”

Audio mixing also involves outboard effects or plug-ins and the possibility to control external devices. How about those? These are covered, too, courtesy of Lawo’s in-built Remote Desktop and VNC capabilities. This obviously includes DAW and cue playback control. It is therefore fair to say that Lawo’s Mix Kitchen is a fully-fledged remote solution for exacting audio engineers who need to work from home, or a quiet place somewhere on the road.

Although all bases are covered, such a compact solution will not replace “man-sized” audio gear anytime soon. Unscripted shows that require a lot of interaction and lightning-fast responses to the unexpected will be difficult to remote with a setup that fits in a backpack.

Yet, slightly more routine jobs, such as newscasts and tightly formatted shows can safely be mixed from just about anywhere in the world without the slightest glitch. Even over a 4G connection.

Now that is remote at its finest, especially since it also improves the audio engineer’s work/life balance and saves tons of CO2 emissions.

About
Lucas Zwicker, LawoLucas joined Lawo in 2014 during an internship, while continuing to work as a freelancer in both the broadcast and live entertainment industries. He holds degrees as Specialist in Event Technology and Bachelor of Engineering for Electrical Engineering and Information Technology from Munich University of Applied Sciences. Together with Christian Struck, Lucas heads the Audio Production product line at Lawo. He is responsible for the conceptual design and development of Lawo's mc² consoles and audio production solutions. 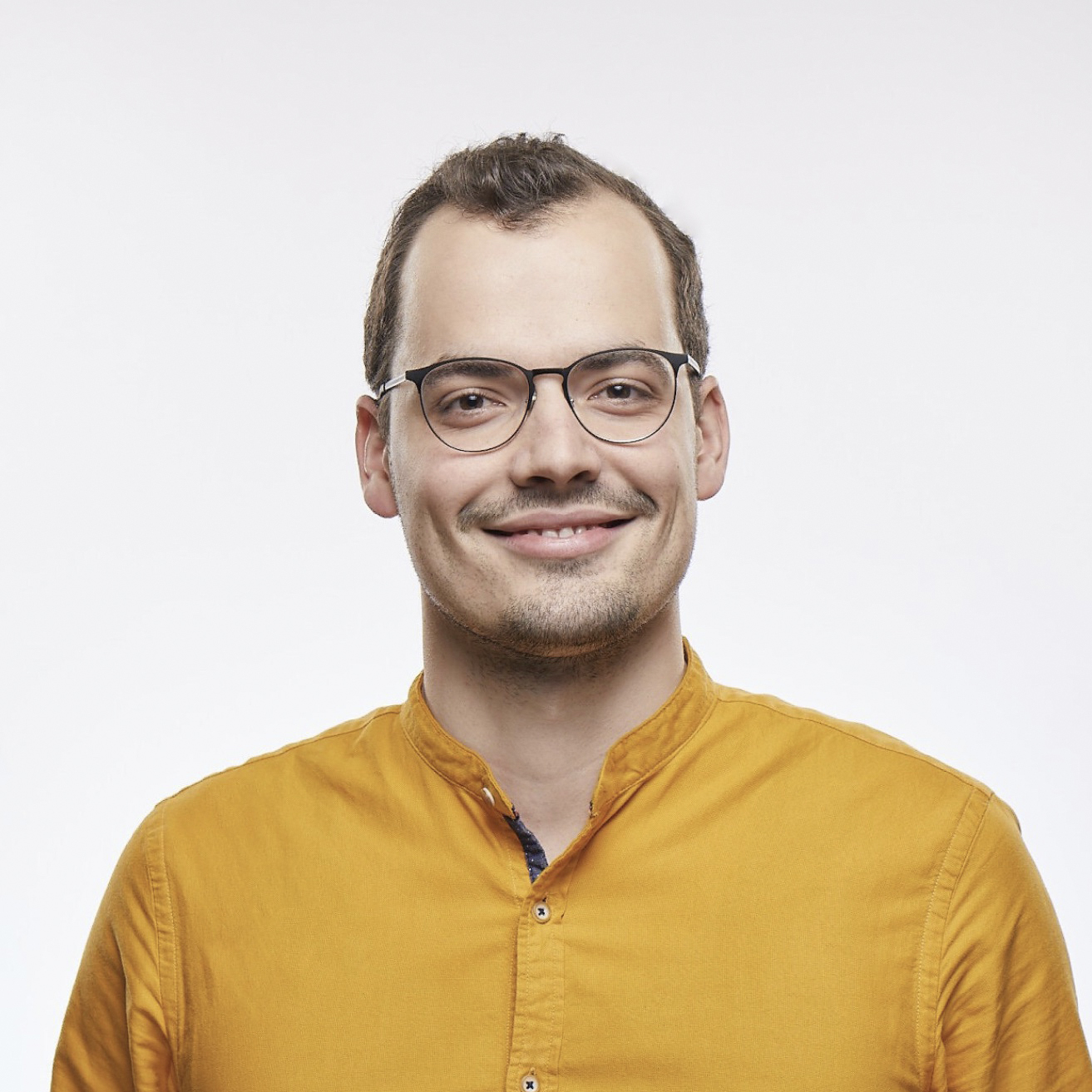