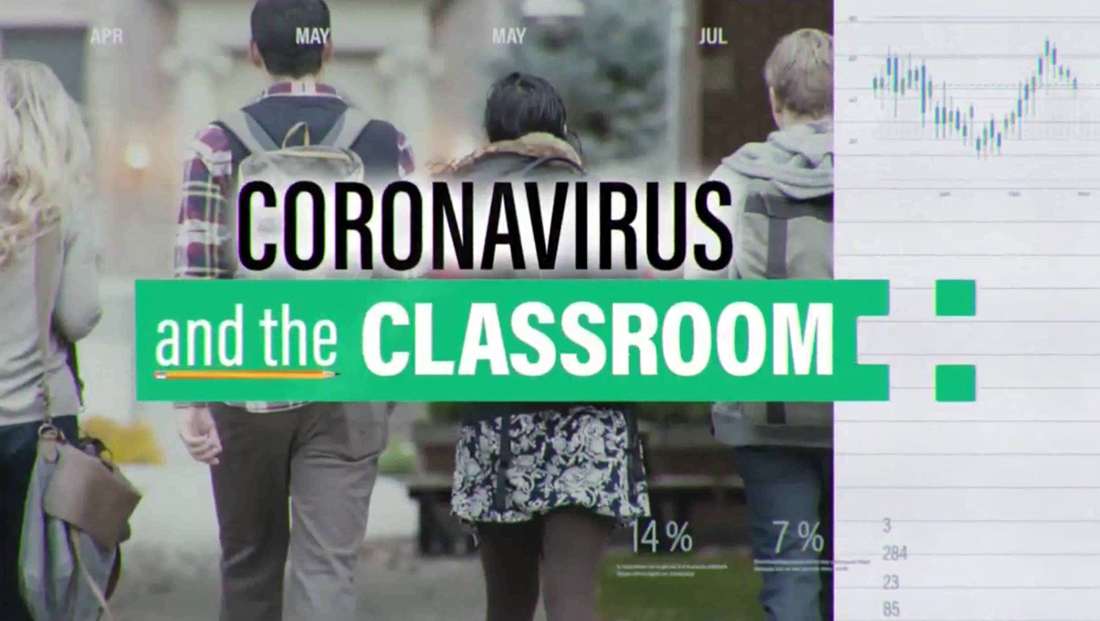 NBC News offered a primetime special on coronavirus‘ effect on the U.S. education system Aug. 13, 2020, that modified its existing COVID-19 graphics to include a classroom motif.

The network drew heavily on the coronavirus graphics it introduced in April 2020, with the biggest change being the shift addition of greens to mix, presumably meant to represent one of the traditional colors of chalkboards.

This included changing the bold red bar that features an equal sided cross formed in the negative space on the far right to a green shade.

A yellow pencil was added a sort of “underline” for the words “and the” while other education themed imagery was added to the look.

At one point during the special, the network cut to large graphics on on the video wall alcove and “tower” back in Rockefeller Center, which is normally home to “Nightly.” Holt has been anchoring from home or on location since the spring.

Other graphics included a slide in OTS element as well as a full width “bar” running along the bottom of the screen that features the “Coronavirus and the Classroom” branding and notebook paper theme (complete with a “hole punch” in the lower right corner).

All of these were used in tandem with the network’s red and blue coronavirus look and shared many visual cues in addition to the cross shape, including typography and data and text used as background elements. The coronavirus branded lower third banners typically used on MSNBC were also used during select segments.

NBC also stuck with the hard hitting music bed used for coronavirus reporting across its family of properties.

As with any live production, there were a few a slips Thursday night — someone, presumably Holt, can be heard clearing their throat on an open mic toward the end of the open.

There was also a case when a graphic notebook was inserted behind the branded bar in the lower left corner.

At the end of the special, Holt signed off and the network cut to a side view of him — with a bit of a puzzled look on his face — before switching to a view of Stuyvesant High School.

The special was part of a network wide period of special programming, which included a virtual town hall produced by “Today” and reports on it and “Nightly” throughout the week.