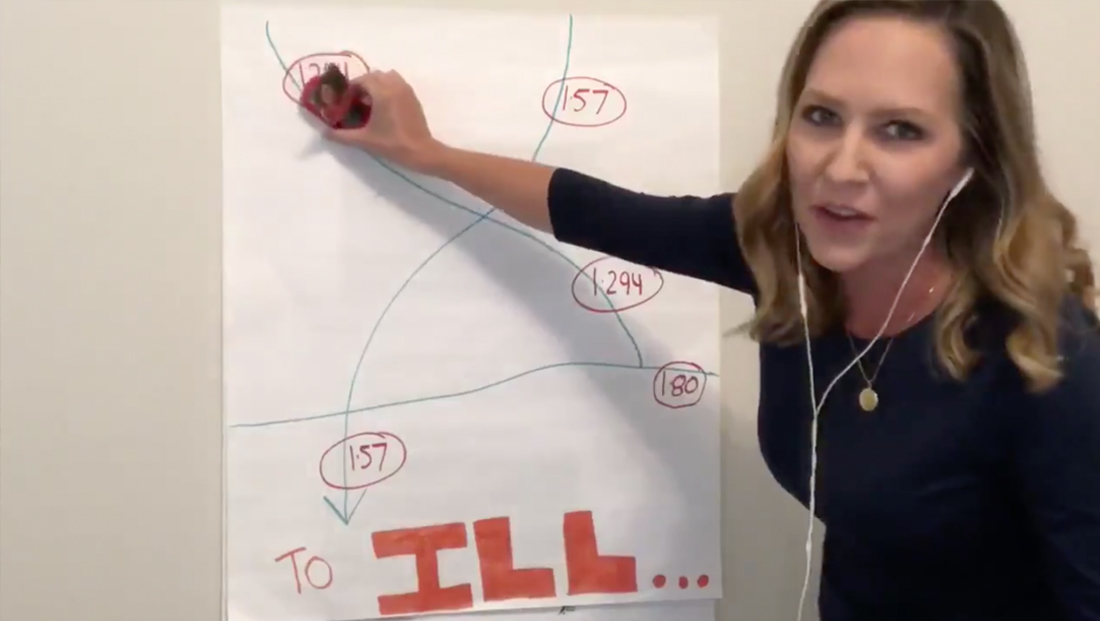 Jindra used a large sheet of paper and markers to create a simple map showing how Interstates 294, 157 and 80 all intersect and, thanks to a new partial interchange, will make the trip, for example, to the University of Illinois in Urbana a bit easier.

Jindra cheered on her alma mater along with anchor Robin Baumgarter, herself a Illinois graduate (and whose daughter is currently attending the school).

Baumgarter became part of the story when vintage photos of herself were used, attached to what appeared to be toy cars.

After demonstrating the new route the newly constructed roads would allow with a separate vehicle, also with photos attached, Jindra peeled away the map to reveal another sheet below.

This one had two satellite images printed and affixed to the paper along with handwritten notes labeling the two phased project’s changes.

Normally traffic reporters have access to fancy computer generated graphics and Jindra likely could have created a map that illustrated the new traffic patterns fairly easily had she been at the station.

Many stations also leverage touchscreens or integrated tablets for traffic reporting, allowing the reporter to “draw” on the map and move it around to help tell the story. Others use chroma key to let traffic reports “stand in front of” maps and graphics.

The station likely could have inserted fullscreen graphics over her verbal explanation of the project, but that wouldn’t have allowed Jindra to interact with maps like she did.

WGN’s morning news is also known for its folksy, informal style, so the effective use of simple drawings could have also been more in line with that image.