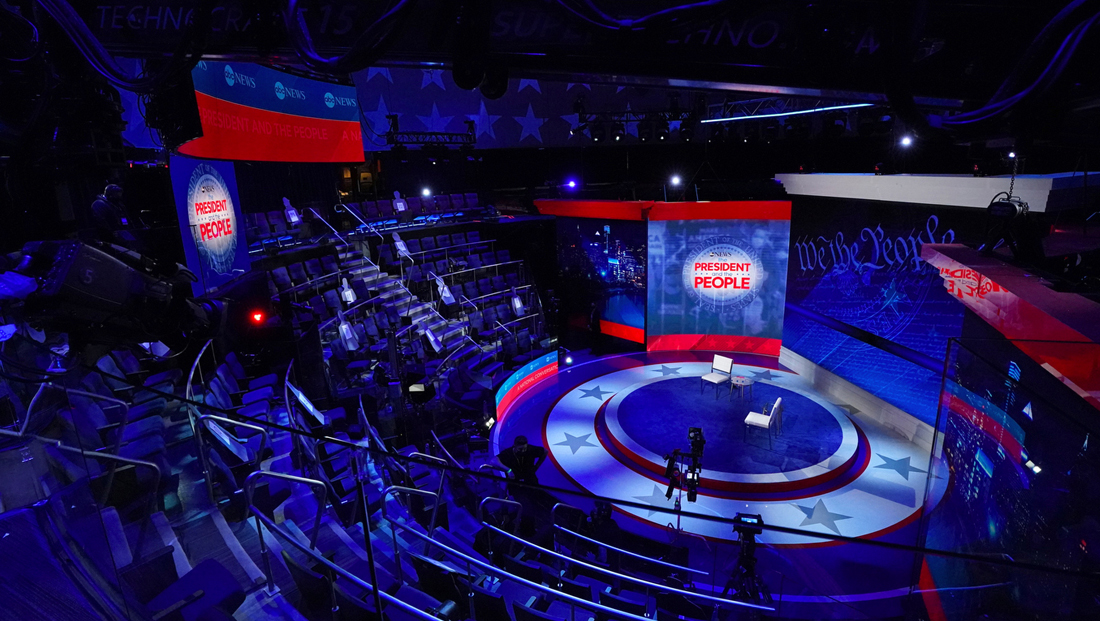 The special was moderated by “Good Morning America” and chief anchor George Stephanopoulos and produced from the National Constitution Center in Philadelphia.

For the show, entitled “The President and the People,” ABC News took over the museum’s circular immersive theater that normally gives views visitors, thanks to a steep set of risers, an elevated view of the action in the middle of the space.

Instead, these chairs were filled was a sparse, socially distanced audience of Pennsylvania voters wearing masks.

ABC set up a series of video walls from Fuse Technical Group along one side of the space, covering roughly half to the seating (without the video walls, the seats are a nearly 360 degree “in the round” set up). 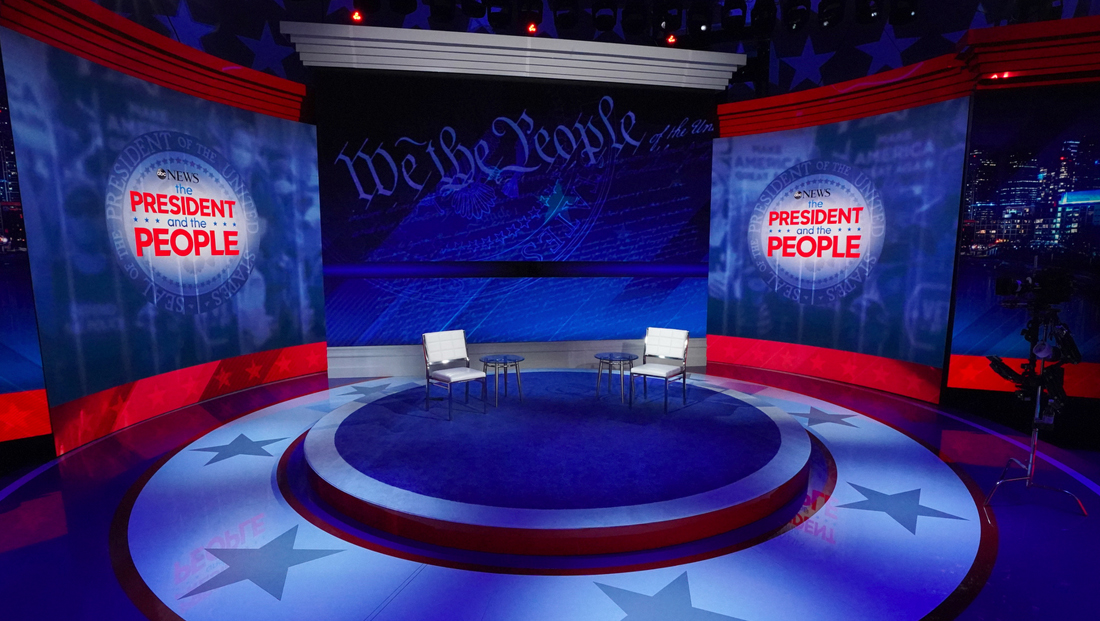 Rather than just throwing up a wide segment of LED, ABC set designer Seth Easter opted to use five separate panels as the backdrop behind Trump and Stephanopoulos, all of which are capped with a “crown molding” header from fabrication Allsorts, who also did the other construction work.

The center screen featured a rich blue collage that combined the presidential seal, images of the constitution and angled accents along with a thick blue gradient band that served as a sort of “virtual header” on closer shots of the pair.

Flanking this are two slightly curved segments that featured the show’s logo, which is also based on the presidential seal combined with ABC’s signature sans serif typeface and vertical layered look used for other specials.

Finally, on either side an additional panel, tucked slightly behind the curved one, displayed a stylized Philadelphia cityscape with blue and red accents.

ABC brought in a circular riser where Stephanopoulos and Trump to sat farther apart than might be typical and ringed that with a star floor decal.

Overall, the set arrangement allowed the production to walk the fine line of allowing the program to be interaction (which is an inherent part of a town hall format) while also keeping people distanced.

The network also installed additional LED arrays from ROE Visual in front of the first tier of audience seating, one of the small balconies normally used for accessible seating and high above the rear of the seating area.

As part of the safety protocols, audience members remained near their seats to ask questions and had individual label mics. Some kept theirs masks on while asking and others opted to take them off.

It’s worth noting that the theater is designed with a 360-degree front projection screen that runs above the windows overlooking the circular second floor gallery beyond (which were kept dark for the special), which ABC showed a blue and star pattern.

Lighting designer Dennis Size of The Lighting Design Group also brought in some additional trusses to hold lighting instruments to add the dramatic lighting in the space, including subtle splashes of light highlighting each star on the floor decal.

The space used, known as the Kimmel Theater (not to be confused with the nearby Kimmel Center), is normally used to welcome visitors with an experience known as “Freedom Rising.”

During most days, the theater also includes a live performer who narrates portions of the experience, though there is also a version that fills in those lines with a recorded narration.