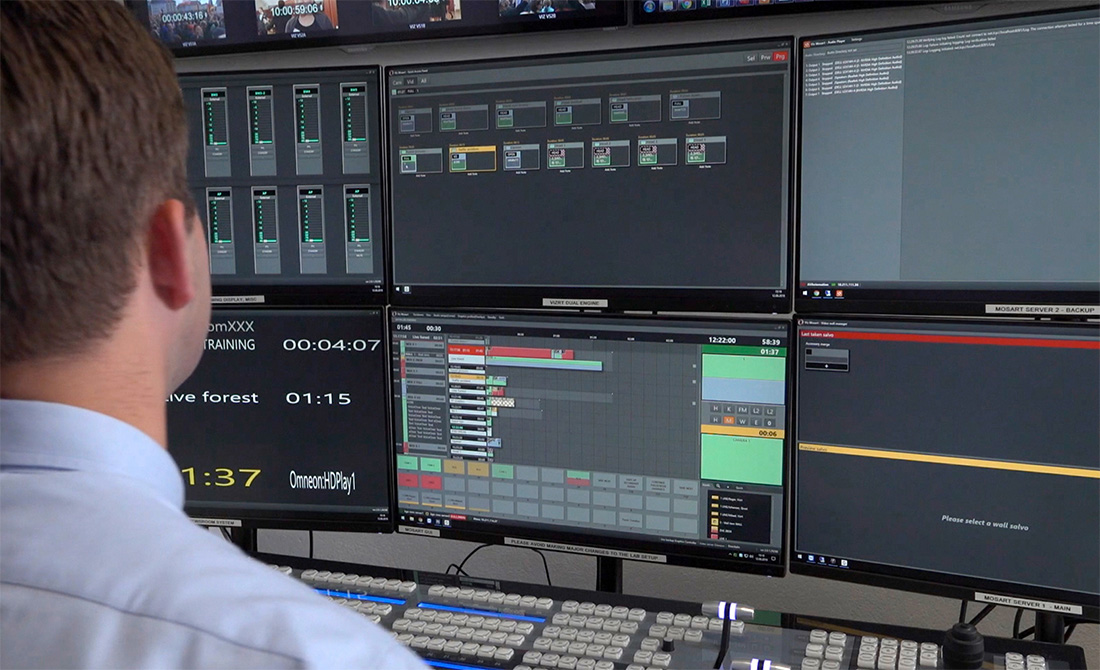 Imagine you are a broadcaster in December of 2019. Your CTO calls an all-hands meeting to roll out the latest ten-year plan aimed at replacing your hardware-based infrastructure with one that is to become 100 percent software-dependent. The plan is to unify your live production tools with your non-linear production tools and run either on premises, in the cloud, or even a hybrid of both – making everything worth together across your whole situation. I think it is safe to say that many, or most, in this audience would be highly skeptical at best on how this could possibly be achieved.

As skeptical as one might be on this as a ten-year plan, imagine how ludicrous it would be to try to achieve it in six months. And yet, the market today is well on the path of achieving that by having all employees working remotely while still seeing an increased need for more news and content – it is, after all, a U.S. election year, and one with a global pandemic to cover. Further, it is a time in which meaningful content has an even higher importance than usual.

I’m careful to say “software” rather than mention the magic buzzwords CTOs like to whisper to CFOs to get the dollars they think they need to stay relevant – words like “cloud” and “virtual.”

I don’t like those words so much, not because they are not important, but because they are buzz words. The real thing here is software. Software is the superset of cloud and virtual, it is the grease that allows modern video processing to run in trucks, in sports stadiums, in TV stations, in your garage during lock-down, locally, virtually, and remotely. It can run anywhere. This is not a virtualized or cloud revolution. It is a software revolution. Too many people get caught up in the buzz words that are really just ways of running software in a different place in the world. What enabled that was not cloud or virtual, it was the fact that it is software. In boardrooms everywhere, it’s cloud or virtual that gets the funding – but, those aren’t the fundamental drivers of the change at all.

If you solve software, you solve cloud. And if you solve software, you solve on premises and off premises, and logging into somebody’s machine remotely, and production trucks, and mobile. Indeed, anywhere we choose to run computers will mean you can produce content, and no matter the changes in technology, you are prepared. Virtual is only another buzz word. If you prepare yourself for software, then the rest follows – and when there is the next cloud or virtual need, you will already be ready.

The high cost of tradition

In a traditional studio, you have all sorts of guarantees around clocking, synchronization, audio flows, and much, much more. Those firm guarantees and absolute determinism come at a huge cost, however. Your customers do not pay you more for those guarantees, nor do they make your business grow, or make your shows better. As an industry we need to make it possible to make great content without all these complications and costs.

In terms of building a business, it makes no more sense today than other things did dating back to the dawn of TV. The companies that make the best content – great shows that customers want to watch and engage with and build a relationship with – are the companies that are going to win. None of those things are made easier by making the technology harder or more expensive. So, where do you want to be investing and growing? In the technology? Or in making great content and more shows?

The defense mechanism of the old guard is to point out a few of the things that they did well. Traditional TV stations that think this way are going to get left behind in the same way that traditional newspapers got left behind.

We do not need to look outside of the media industry to read the writing on the wall. Newspapers have been under pressure for years as consumers have moved away from reading on paper to reading on the web. This gave rise to massive new entrants to the market. Some of the established traditional papers read the winds of change and have transitioned to the world of building a news experience that allows them now to interact directly with the customers that is not based on printed paper. News outlets that failed to read this are all on the decline. These disruptive changes are the ones that cause markets to change and within the broadcast market it should be very clear that this is already happening.

Newspapers never ran out of ink – which is why the majority of them kept printing and working in the way that they always had – a tactic that might be tempting to many broadcasters. In many ways the current pandemic might save TV because it temporarily forced us to look for new ways to produce shows and make that change rapidly. For newspapers, if there had been a worldwide ink shortage it would have meant most would have been forced to adapt, change, and – probably – survive.

TV stations that embrace new technologies are going to be the ones that win out.

If you watch TV today, you are seeing shows in which callers are being brought in over remote calls, shows that are being hosted from home, or produced in a garage. Not that long ago this would have been thought to be a ridiculous way to make a show – yet we are watching TV that is every bit as engaging as that which came before. This reinforces that it is great stories and content that wins out. As we come out of this, those that go back to these traditional ways of production will be like the newspapers that hung on too long to the printing press, and will be the ones ultimately struggling with declining revenues.

Another example: when Apple came out with the iPhone, Nokia scoffed at them because you didn’t have guaranteed 911, and you didn’t have all sorts of other guarantees that a traditional phone would have given you. They were right. All of those things were weaknesses of the iPhone. It’s just that there were a lot of other strengths that made those weaknesses irrelevant. Today, Nokia is out of the cellphone business and Apple just set the record for being the first company in the world valued above two trillion dollars.

The changes we’ve made are here to stay

The ones that embrace the scalability, the movability, and the huge benefits of modern technology will become more valuable because they’re talking to customers, and they know who their customers are. The revolution we saw in the newspaper market is absolutely happening in video. Those unwilling to change are going to get left behind. That drives better TV for everybody.

The old business school adage, “Location, location, location!” is a great analogy. In retail, it used to be that the companies who had the best store location were the winners. It was Amazon who took it online, and never cared about location. They redefined the problem and are clearly destined to win. The same is happening in TV and we can all choose which side of this revolution we want to be on.

In some ways people think that location is in the cloud, so they do think about location. Literally what we’re doing is moving to a data center. There are some TV stations and some companies who still argue that on-premises traditional production is better and have their reasons why, which are probably completely correct.

However, the best location is not even needing to answer that question.

What always wins out in technology is the people who answer a different question entirely. If you are software-based, location doesn’t matter.

About
Andrew CrossDr. Andrew Cross is President of Research & Development for the Vizrt Group. He is known for leading the development of NDI and multiple NewTek solutions, including the TriCaster, 3Play, and TalkShow. Andrew has a Ph.D in computer vision from The University of York, and has published more than 20 technical papers in peer-reviewed scientific conferences and journals. When Vizrt acquired NewTek in 2019 Andrew was named as President of R&D for the newly-formed Vizrt Group.