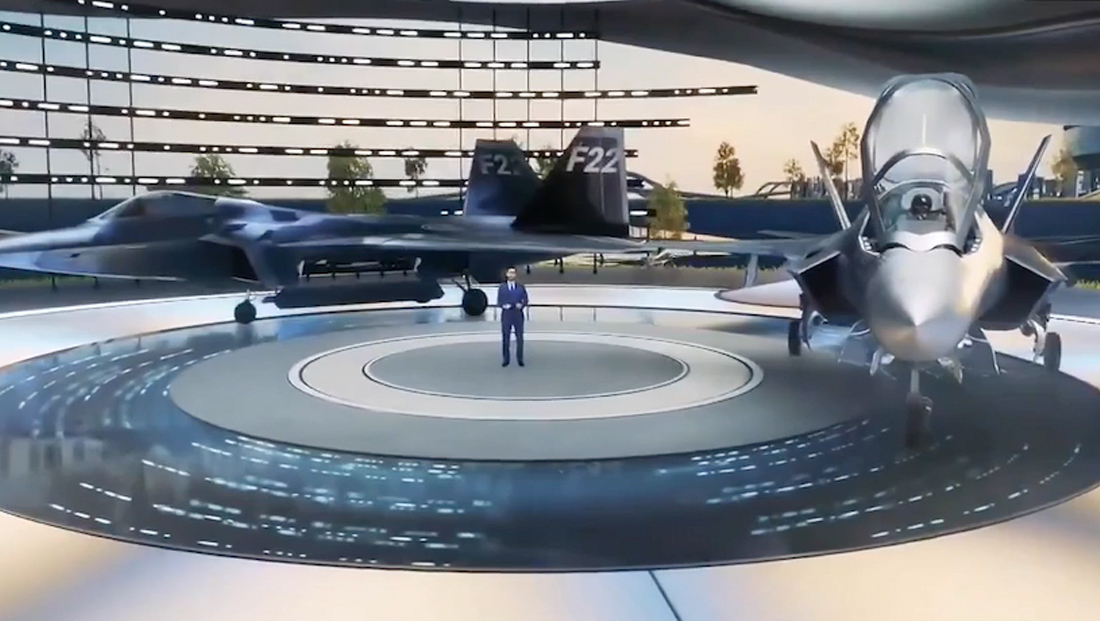 An Asharq News (الشرق) augmented reality explainer explores the differences between the F-22 and F-35 fighter planes from a futuristic virtual complex of hangers and aircraft carriers.

The segment, crafted by Myreze for the network, begins with a view of an organic wood textured panel before revealing a large, open circular “hanger” space with 3D models of both planes.

The virtual studio is part of a larger project to create dynamic visuals for the entire network.

Myreze looked to “organically bridge the gap between the audience and what is shown on screen,” with the “universe” of Al-Arabiya visible in the background while also providing a centerpiece location for presenting information.

The virtual models rely heavily on quartz and glass textures.

What likely are supposed to represent thin curved LED light or video ribbons ring the platform suspended on vertical supports while the presenter stands in the middle.

These ribbons, meanwhile, including visual nods to the network’s Morse Code design language.

Larger openings, as well as the spaces between the ribbons, showcase a city skyline before the scene “takes off” for a virtual aircraft carrier.

Along the entire journey, large callouts appear with key facts and stats of the craft. To illustrate the power of the aircraft, electric blue bursts and rings also appear on screen as viewers fly along through the sky.

Viewers are then treated to a stunning view of what appears to be a man-made island with a city and large circular outcroppings of landing pad style “islands” with the “hanger” in the middle.