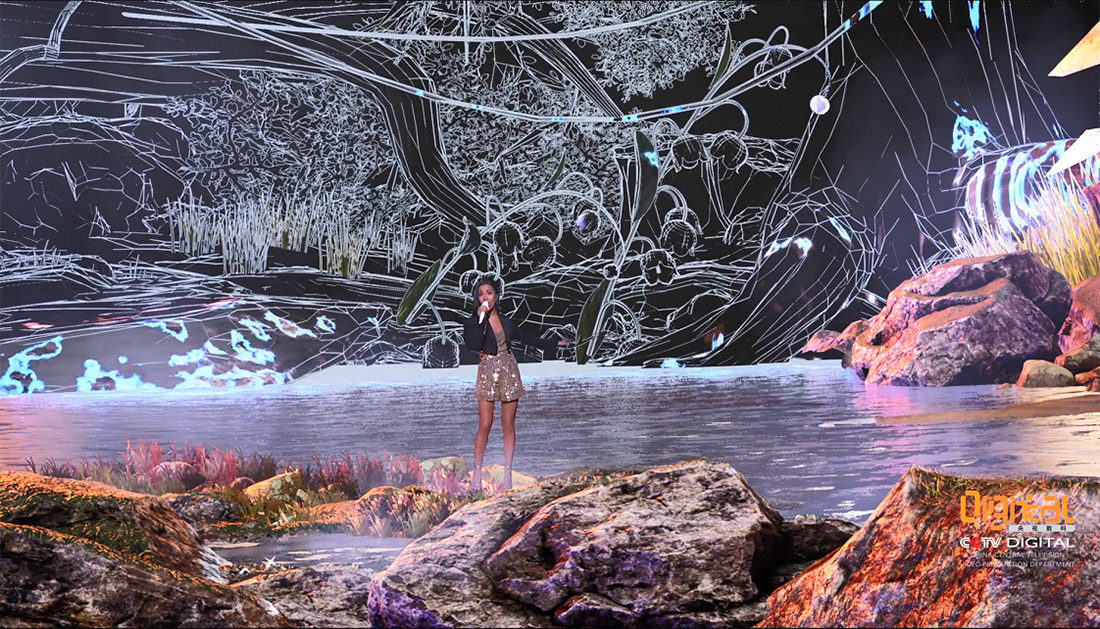 CCTV celebrated New Year’s Eve with a gala featuring songs and storytelling set in a virtual world. Chinese broadcasters will also have large celebrations in February for the Lunar New Year and Spring Festival.

For this event, China Media Group was able to utilize extended reality (XR) production tools for the first time on a Chinese television program.

The set was created by layering graphics and augmented reality elements on top of a large LED display wall and LED floor, using camera tracking to tie it all together.

“This was an incredibly complex project, and we started the planning process several months before shooting,” said Mr. Feng of CMG. “Planning really involved everyone – the Director needed to know the scope and boundary of the virtual scene in order to better design the scene and shooting angle, the LED display team needed to accurately align the video signal with the pixel points on the screen to ensure that the XR scene did not distort and affect the perspective, the cameramen needed to know the subject position and depth of the XR scenes to better design the shots and camera moves, and the Producer of the XR scenes needed to ensure that the scenes were seamlessly connected with the edge of the LED displays based upon the camera positions in order to achieve the best visual effect.”

“We couldn’t be happier with the results,” comments Mr. Feng. “This was one of the most technically challenging shows I’ve ever worked on, but everyone was amazed at the final visuals which were absolutely stunning. XR isn’t just an alternative to a green screen – it’s a revolution that offers so much more creativity and immersion, and it’s being driven by developments in real-time rendering like the Voyager solution from Ross. We’ve already started planning the Spring Gala Festival show for CCTV – the world’s most widely viewed TV program – and we’re hoping to bring even more amazing images to our audiences thanks to our great partnership with Ross.”