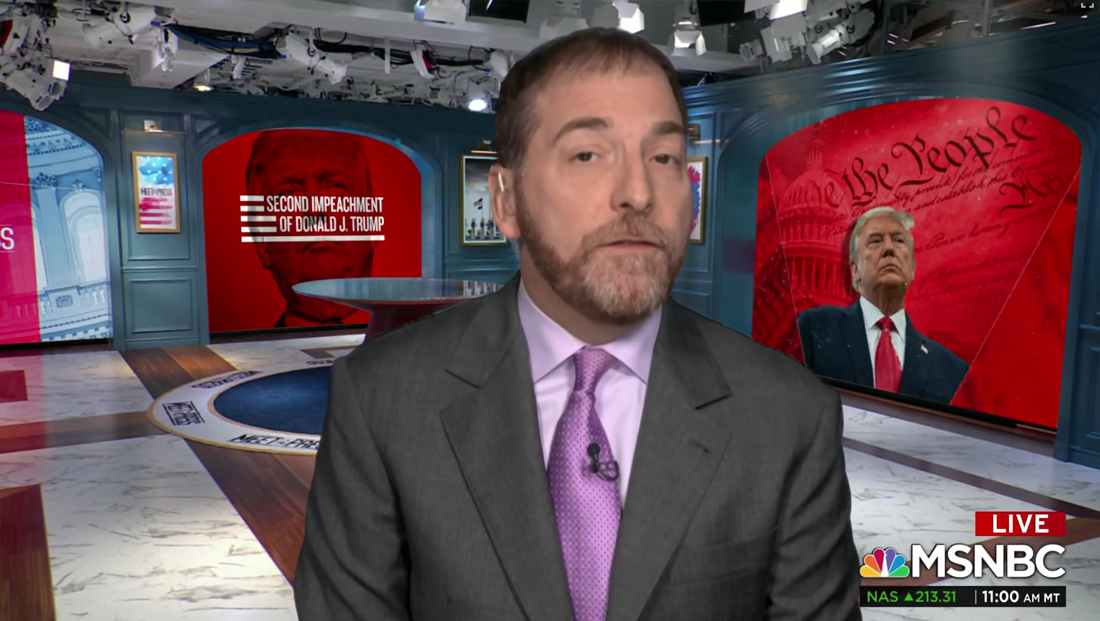 Due to the coronavirus pandemic, Todd has been frequently anchoring both shows from his home TV studio setup, which, like many NBC and other networks have deployed, features a large video screen behind where talent sits.

Starting Thursday, Jan. 28, 2021, the show’s background was updated with a view of the new Studio N1.

Before that, the background behind Todd (or whoever was hosting) typically featured a view of the old set.

It also became common to see “video on video” style shots of the “MTP” set with images fed to the video walls on both shows, including during teases and intros — even when Todd was remote. Some of these were done in real-time and others were faked after NBC News moved to its new bureau. 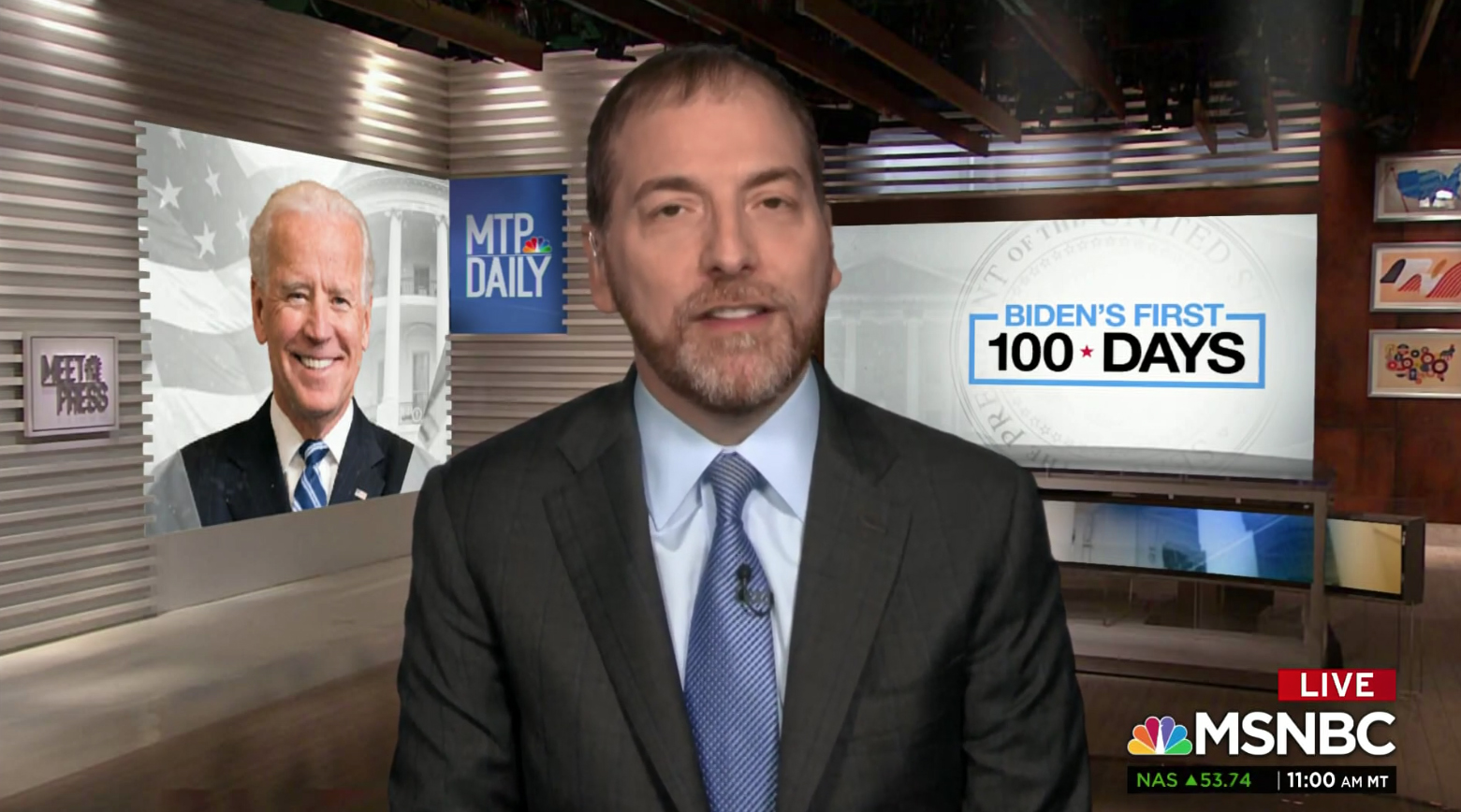 The new look, which showcases the “Meet the Press” roundtable and video wall-filled colonial blue archways, can be modified to include topical graphics, such as the second Trump impeachment look shown above.

Todd was out Jan. 25, 2021, and “MTP Daily” has been frequently significantly covered by live coverage of White House press briefings this week.

Like many networks, NBC started by using pre-designed, more generic stills or video loop backgrounds behind its talent when remote production first started out in the spring of 2020.

This included a loop of the network’s fourth-floor newsroom behind “NBC Nightly News” anchor Lester Holt and others — while some shows would use imagery inspired by its graphics package (Todd previously sat in front of photos of Washington with the “Meet the Press” angular “fractal” motif and star accents added).

Often, however, this imagery did not change in response to the story being discussed — with the networks instead relying on OTS overlays or insert graphics to fill that role. 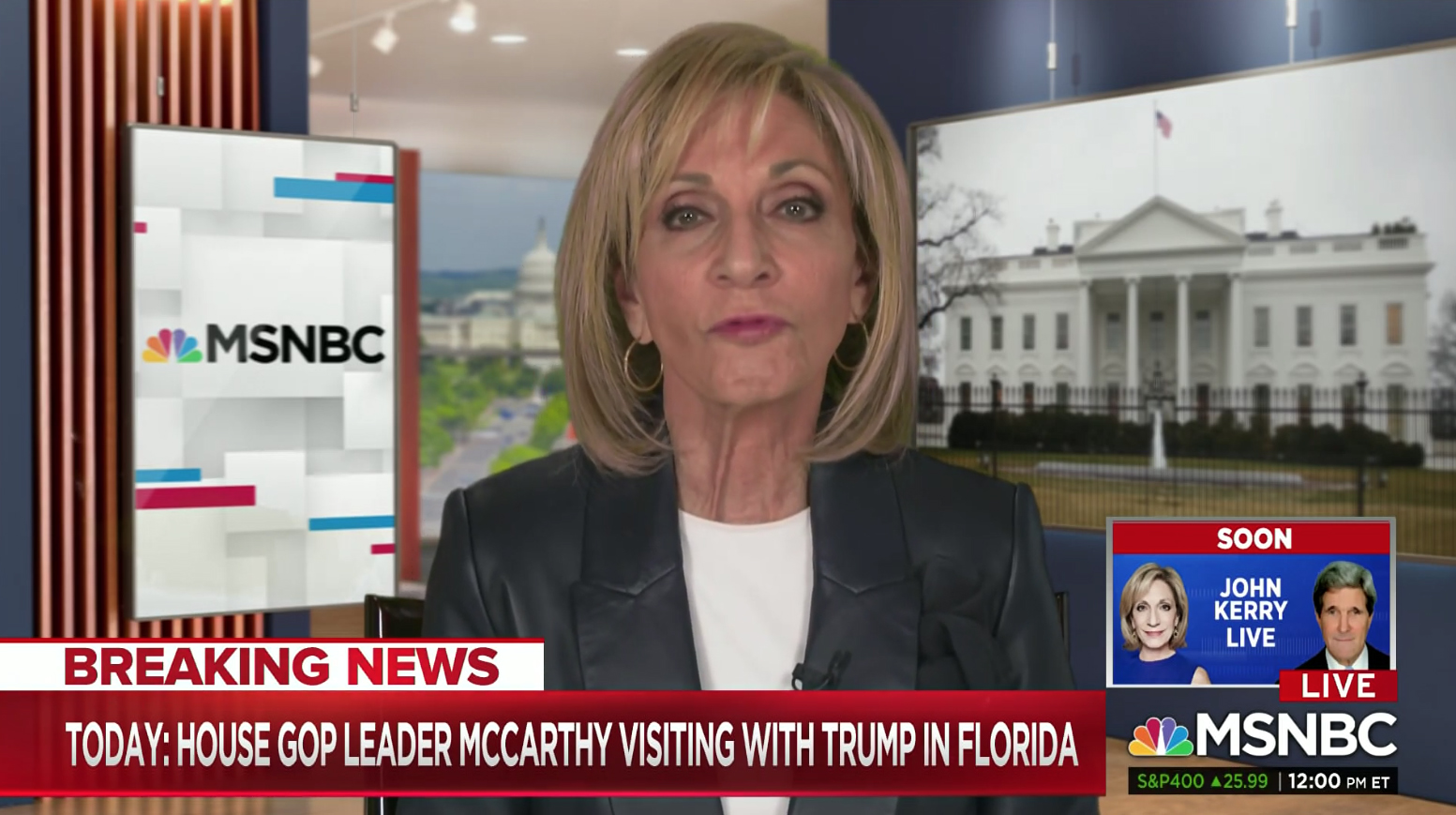 This background, typically used by ‘Andrea Mitchell Reports’ on MSNBC, uses what appears to be an entirely computer generated image of a set, though some elements are inspired by real NBC News sets.

However, as the remote productions continued, the network appears to have refined its approach by, at least for select shows, using actual photographs of the studio sets that have been enhanced (or, in the case of “Andrea Mitchell Reports,” something inspired by real studio sets).

Those enhancement includes “filling” the onset video walls with topical graphics or, in some cases, even adding computer-generated structural elements.

While not full-on virtual sets in the traditional sense, this application also doesn’t quite qualify as virtual set extensions either despite similarities to both concepts.

NBC has most prominently instituted this approach on “Nightly” in late November 2020, with Holt appearing in front of images of the broadcast’s set but with the multiple spans of LED video panels filled with topical graphics.

Holt’s implementation even includes multiple angles of the studio with different video wall surfaces to be filled with whatever the news of the day demands and has continued to be used on most editions since then.

From a technical standpoint, it’s likely a bit more complex to coordinate this type of look, given that, for it to be executed well, the production crew needs to be able to change what’s on the screen behind talent remotely.

While certainly not challenging to implement given today’s technology, it does add another potential failure point and also likely requires contributions from both additional technical and design staffers.

Of course, if the show was in studio, similar resources would be needed to generate and control what’s filling all the LED (for real).

MSNBC's @kasie Hunt anchoring '#MTPDaily' for @chucktodd from alternate studio with a modified image of the old '#MeetThePress' set on the monitor behind her… pic.twitter.com/00iYE6JcCf