The broadcast studio of the future is working today 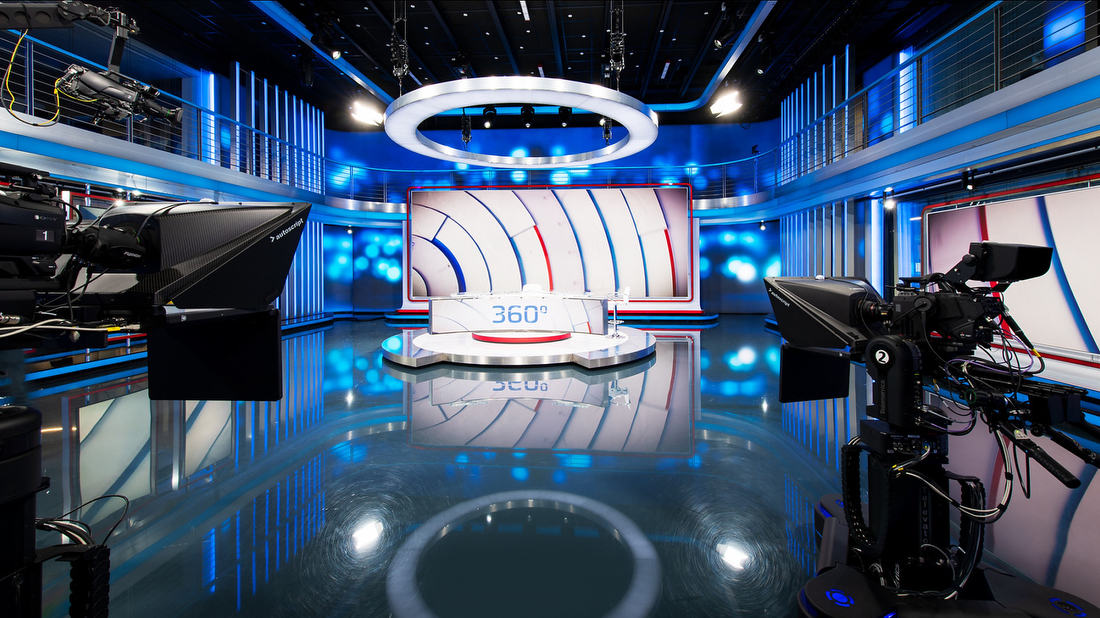 Fueled by both key advances in technology and the unexpected world of remote TV production due the COVID-19 crisis, Telemetrics has been creating new offerings that take advantage of artificial intelligence, facial recognition and its trademark camera control systems to offer broadcasters new options to create dynamic productions.

Take the 4K RoboEye camera system. It leverages facial and object recognition to follow talent around the set, including live on camera moves and adjusting framing when talent shifts positions or inadvertently ends up off their mark, according to Michael Cuomo, Telemetrics’ Vice President.

The company refers to this invaluable capability as “reFrame” and notes that it’s a significant step up from just keeping talent centered in frame. The technology was first introduced in 2018 and Telemetrics has continued to add new features and improvements ever since. 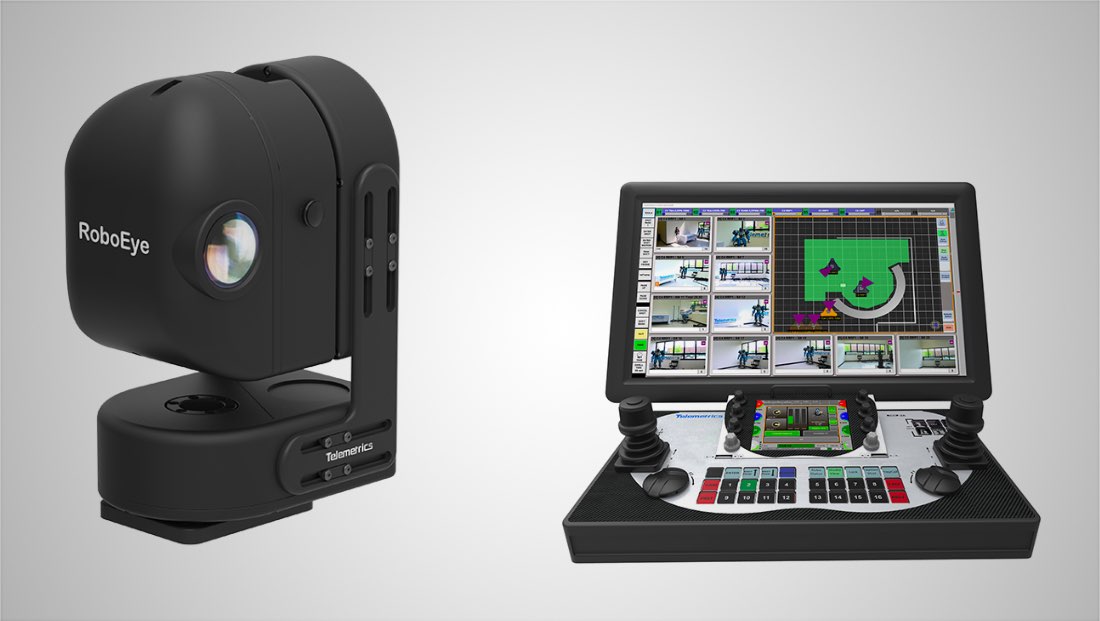 This allows Telemetrics to add a layer of functionality to let the systems aid human operators in taking care of minor camera adjustments automatically — such as adjusting for an on-set graphic behind either side of the talent or widening a shot slightly in talent is slightly off mark.

RoboEye and its new model RoboEye 2 give broadcasters the flexibility of delivering more dynamic newscasts that take advantage of video walls and studio displays that are becoming more and more popular approaches to storytelling.

The system is also compatible with a variety of prompting systems, so it’s also ideal for productions with lengthy scripts, such as newscasts.

It also has the ability for multiple cameras to follow the same person — or have different cameras tracking different people, giving productions the flexibility of punching up a variety of shots throughout a single broadcast. 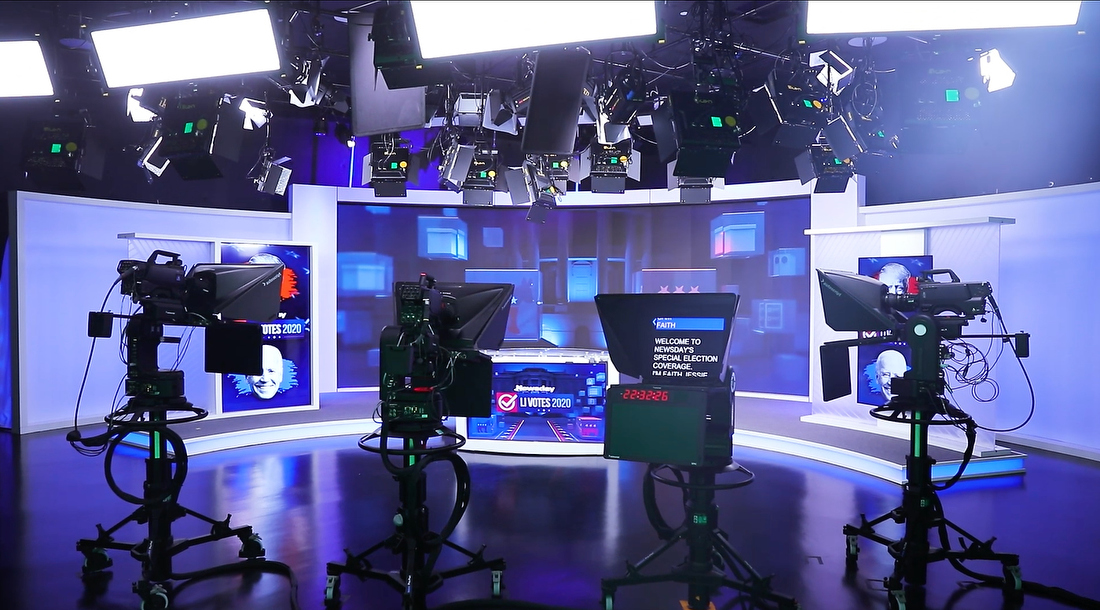 “You’re not taking full advantage of the cost benefits of going robotic, which I think is why we’ve seen hesitation in those types of applications,” explained Cuomo.

Now, however, reFrame’s facial and object tracking lets production teams pull off scenarios such as framing a two-shot because the main host is talking to the guest while also having a slick roving pedestal movement or track movement over to the left.

OmniGlide is another Telemetric product that can function as a traditional robotic or manual camera but with a variety of built-in intelligent systems to facilitate smoother, more dynamic shooting. With its unique design the rover also adds a cutting edge look to the studio as the rover can be reliably moved on-air.

In robotic mode, OmniGlide’s freedom of motion allows for simultaneous direction changes, movement along curved paths (as well as the traditional options) — plus more advanced moves such as crabbing and spinning on a dime. Operators have access to point to point positions as well as key front motion through multiple points — all combined with the option to use reFrame technology to keep an eye on framing.

Operators can also record and playback motions they create manually with the system’s joystick control.

Even in manual mode, where an operator stands behind the camera and controls its movements, the OmniGlide can help “smooth out” camera moves, making it a truly cooperative option between humans and machines.

The system also includes onboard smart obstruction detection and avoidance systems to avoid hitting the set, other equipment, talent or crew while also powering home positioning and calibration operations as well as auto orientation compensation.

Telemetrics’ track-based solutions — which can be floor or ceiling mounted — can be used for automation of standard camera shots, but also create smooth, sweeping views of the studio that typically require a jib or crane to capture.

Many of Telemetrics’ solutions are being presented as ideal solutions for home or remote TV studios that are becoming the new “insert studio” and Cuomo envisions a future where talent could enter a room and the system will automatically powered on, perform diagnostic checks and connect with the remote automatically production facility.

The camera would automatically adjust to wherever the talent stands, while other systems such as lighting, audio and prompting, could also run without any human interaction.

In addition, the systems have been successfully implemented at major sporting events over the past year where the operator was hundreds of miles away from the actual camera as broadcasters tried to cut down on the number of on-site personnel and travel.

Even in a pre- and post-coronavirus world, TV broadcasters were increasingly being tasked to do more with less, notes Telemetrics’ Cuomo.

“They are seeing a lot of their capital budgets being cut. They’re all seeing their operating budgets being cut,” he noted. “But they want to put a product on TV that is just as good as what they were doing before.”

During COVID-19, broadcasters are being tasked with creating remote production setups unlike anything that anyone thought would be seen in the professional broadcast world.

Looking back at the solutions created for COVID-19 broadcasting, broadcasters will take stock in what they did, acknowledging the growing pains and even that the output wasn’t quite at the high level — but this is a great opportunity to iterate new everyday solutions for going forward.

“We’re heavily invested in both the robotics and the control system aspect and that’s very valuable for customers because we can integrate a lot of different pieces of equipment that you wouldn’t normally expect in a robotic control panel,” noted Cuomo.

Telemetrics products are also interchanging and upgradable for broadcasters looking to enter the world of robotic camera control but aren’t ready to jump in full force, meaning one piece of equipment can be added on for more functionality and features down the road.

Telemetrics also aims to make its products, both gear and software, compatible with as many of the wide variety of options available on the market today.

Cuomo notes that Telemetrics is poised to scale into traditional TV studios as its technology begins to be used in more high-profile productions, including Major League Baseball and Turner Sports. 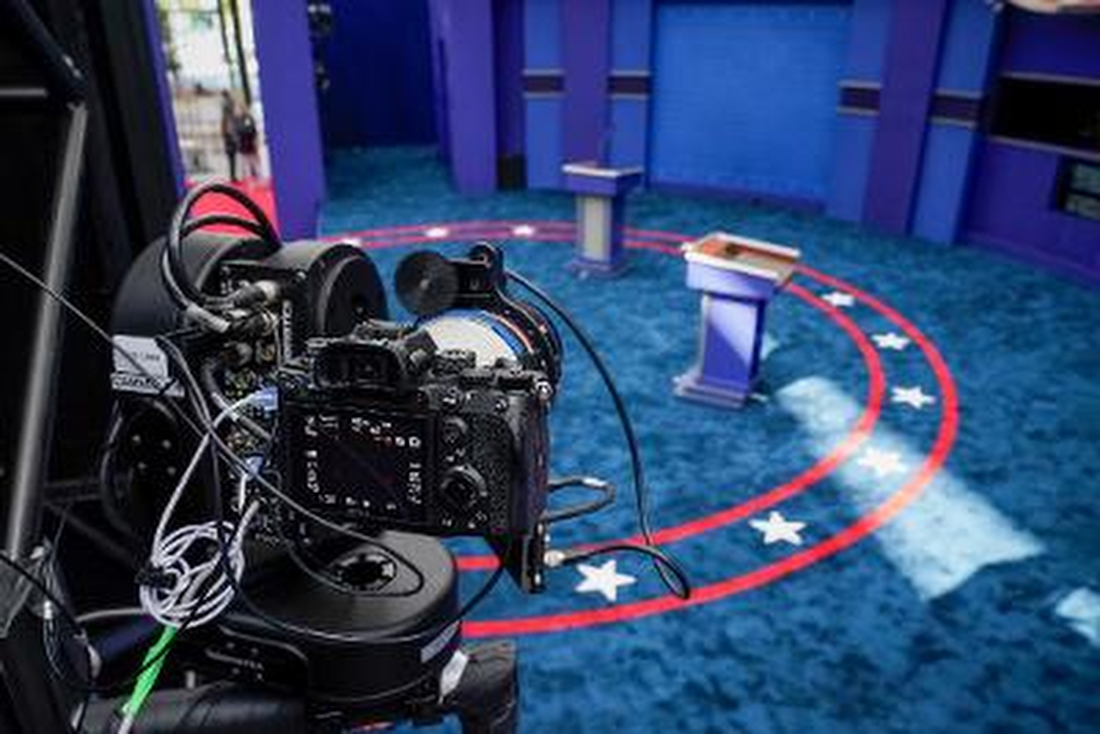 The Associated Press covered the first 2020 Presidential debate in Ohio from above with a remotely controlled Telemetrics DSLR camera rig.

It’s already been used in meeting and educational and training settings — another huge demand during the pandemic — with the tracking and AI technology letting institutions and companies deliver quality feeds and recordings with minimal crew.

Nontraditional broadcasters are also a growing customer base.

Traditional broadcasters are starting to take notice now too, especially given the price point. Where a professional-grade camera, lens and robotic head could cost upwards of $45,000, RoboEye 2 can be priced at around a quarter of that.

“We have a major broadcaster in Texas and they have a single person running the entire control room and our controller is triggering presets from the automation system — plus we’re doing all the facial and object tracking for the on-air talent,” said Cuomo. “Prior to reFrame, that wouldn’t have been possible. They would’ve had three or four people doing those various different things.”

By employing the very latest in robotic camera control, Telemetrics technology is helping broadcasters make the best use of limited space, improve operational efficiencies and navigate these challenging times by limiting the number of people in the studio—all without compromising on program quality and storytelling.

Founded in 1973, Telemetrics revolutionized television camera control with the development of Triax cable-connected camera control systems, and continues to be a pioneer of innovative camera control systems used in the Studio, Legislative, Military, and Education markets. The company began designing, manufacturing and supporting its own camera robotics systems in 1979, and ceiling and floor camera track systems in 1981. Today, Telemetrics offers the OmniGlide™ Robotic Roving Platform, the ever-expanding series of Robotic Camera Control Panels, the S5 line of Pan/Tilt heads, the Televator™ family of motorized columns, and ceiling- or floor-mounted TeleGlide™ track systems. Telemetrics is committed to making the most reliable, durable, and dependable television broadcast robotics ecosystem in the world…products that can be built on for decades, not just years.