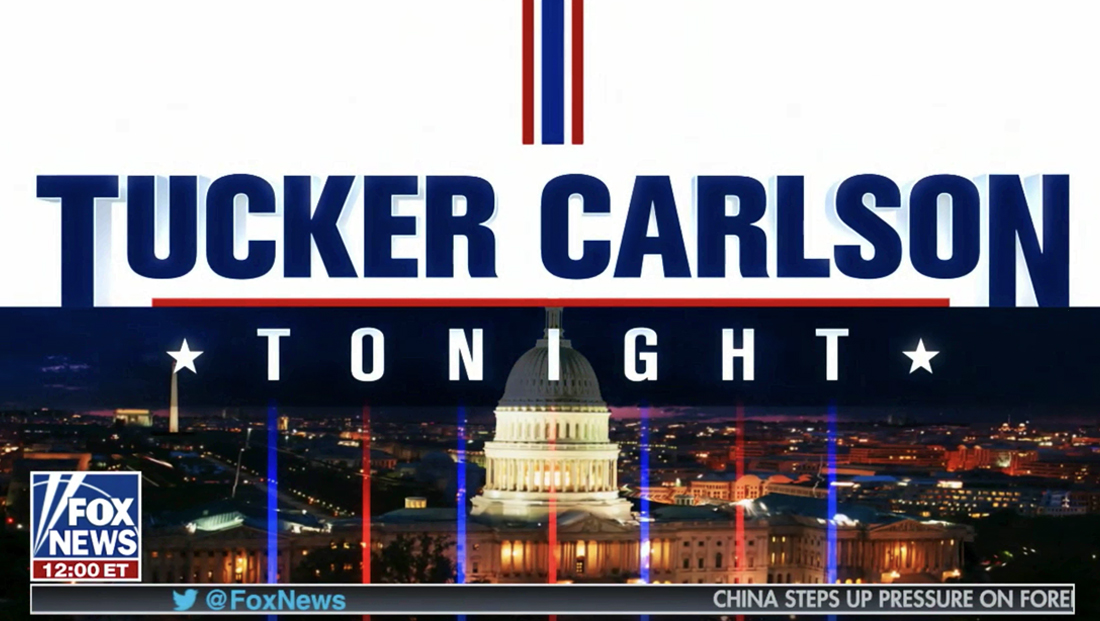 The show, which retained the same theme music, got a new set and switched from a serif typeface to a stronger, condensed sans serif with the first letter in “Tucker” and last letter in “Carlson” larger and extending downward to the level of a red underline that caps off a box for the word “Tonight.”

The logo has some visual similarities to the lockup CNN’s “The Situation Room” debuted back in 2012 before being replaced in 2015.

It also appears to suffer from a similar typographic faux pas — simply bumping up the size of the “end cap” letters rather than taking the time to craft glyphs that more closely match the proper thickness of the other letters.

The design retains the same patriotic theme that the old look did but in a more subtle way — instead of the waving America flag background, bold red and blue bars and light bursts are used along with star accents and Washington, D.C. imagery.

The new open is also slightly longer and incorporates imagery of host Tucker Carlson in a variety of poses. 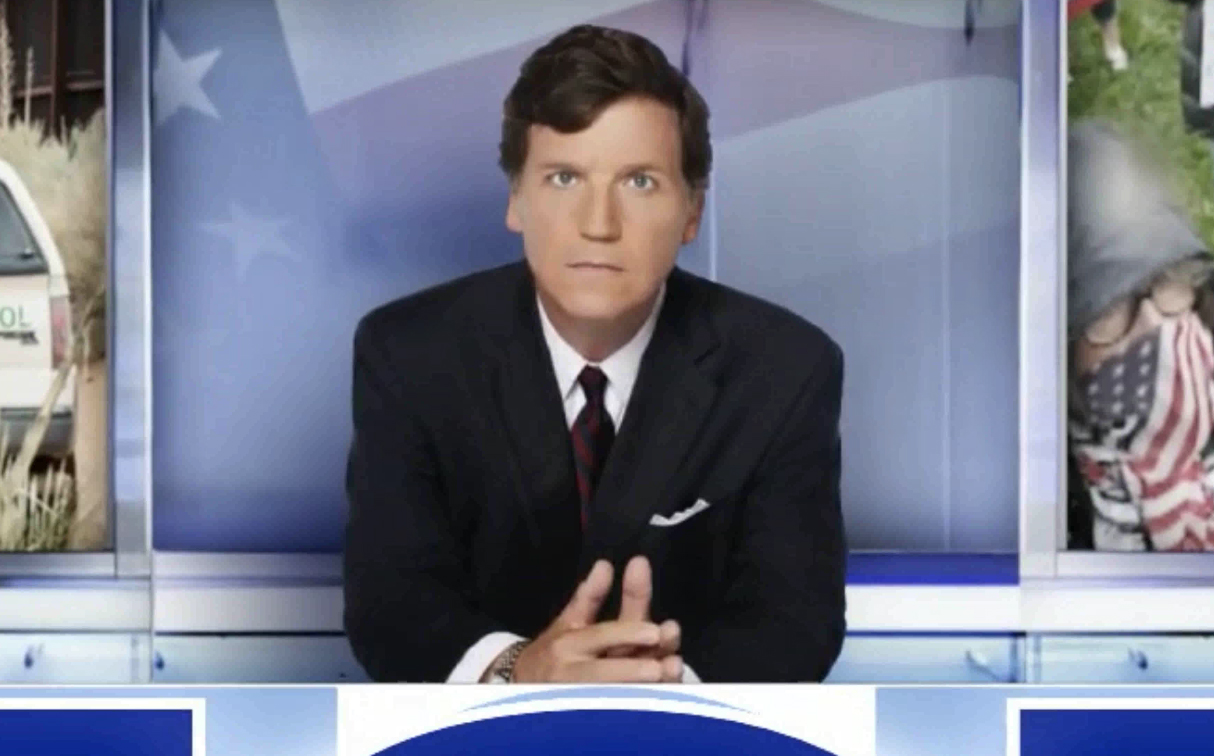 There is also imagery of a crowd waving American flags, a border patrol vehicle and a person holding a “Freedom over fear: America” sign — all of which are in line with Carlson’s right wing and often controversial views. 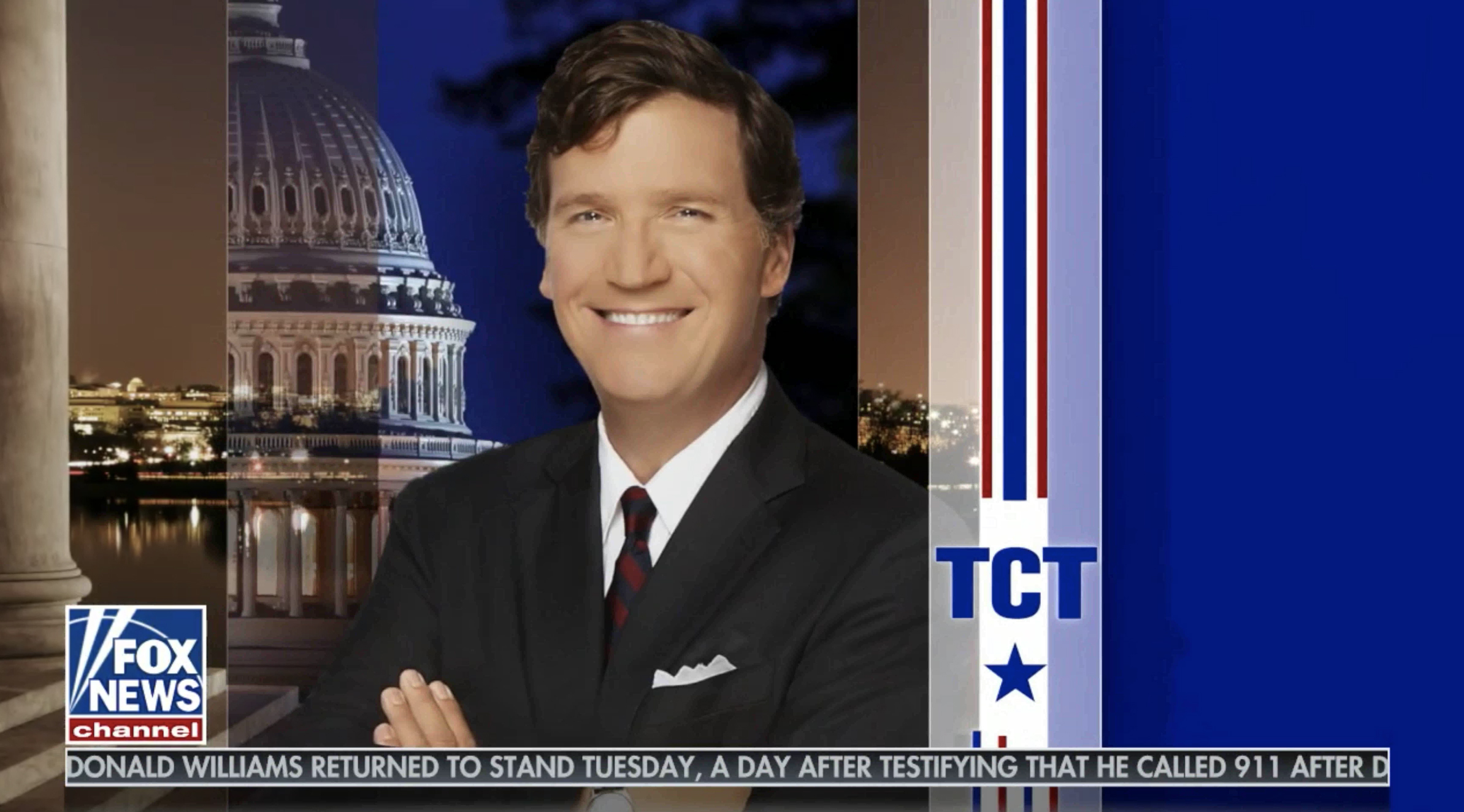 The day after the new open rolled out March 29, the background behind Carlson was updated as well.

It still features a stylized view of the Capitol dome, though the new one is a bit more monochromatic and also features vertical accents and an animated loop of the show title scrolling, ticker style, in a simulated frosted band behind Carlson’s shoulders.

Did anyone think about what happens when the show title ends up in this position? pic.twitter.com/0ysX6IWFVv

Those updated graphics had a decidedly more glassy and 3D feel, where Carlson’s design now has a flatter look — including in the extruded effect his name gets just before the full title appears.

In addition to the open, the network also updated the fullscreens, stingers, rejoins and the “sliver” under the standard network lower third. 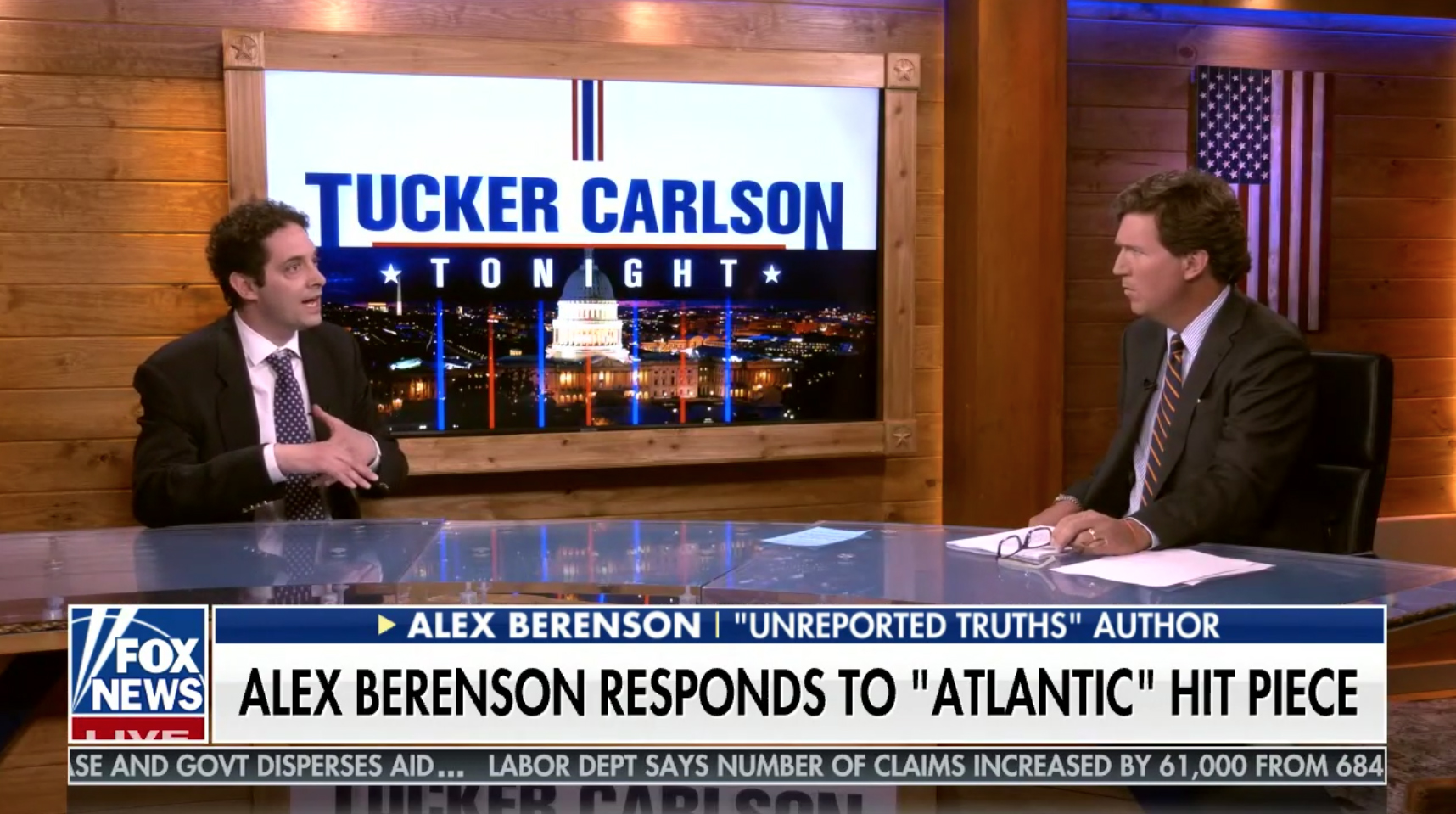 In addition to the new graphics, the show also unveiled a new set done in a rustic “All American” look.

The space includes the video panel used behind many segments. That’s framed by a wood toned frame with stars in each corner. Most of the rest of the set is framed out in wood tones as well and accented with patriotic art and small decorative items and integrated lighting.

The set is also designed to feature in person guests behind its glass topped desk — one of the few non-rustic Americana elements in the new space. 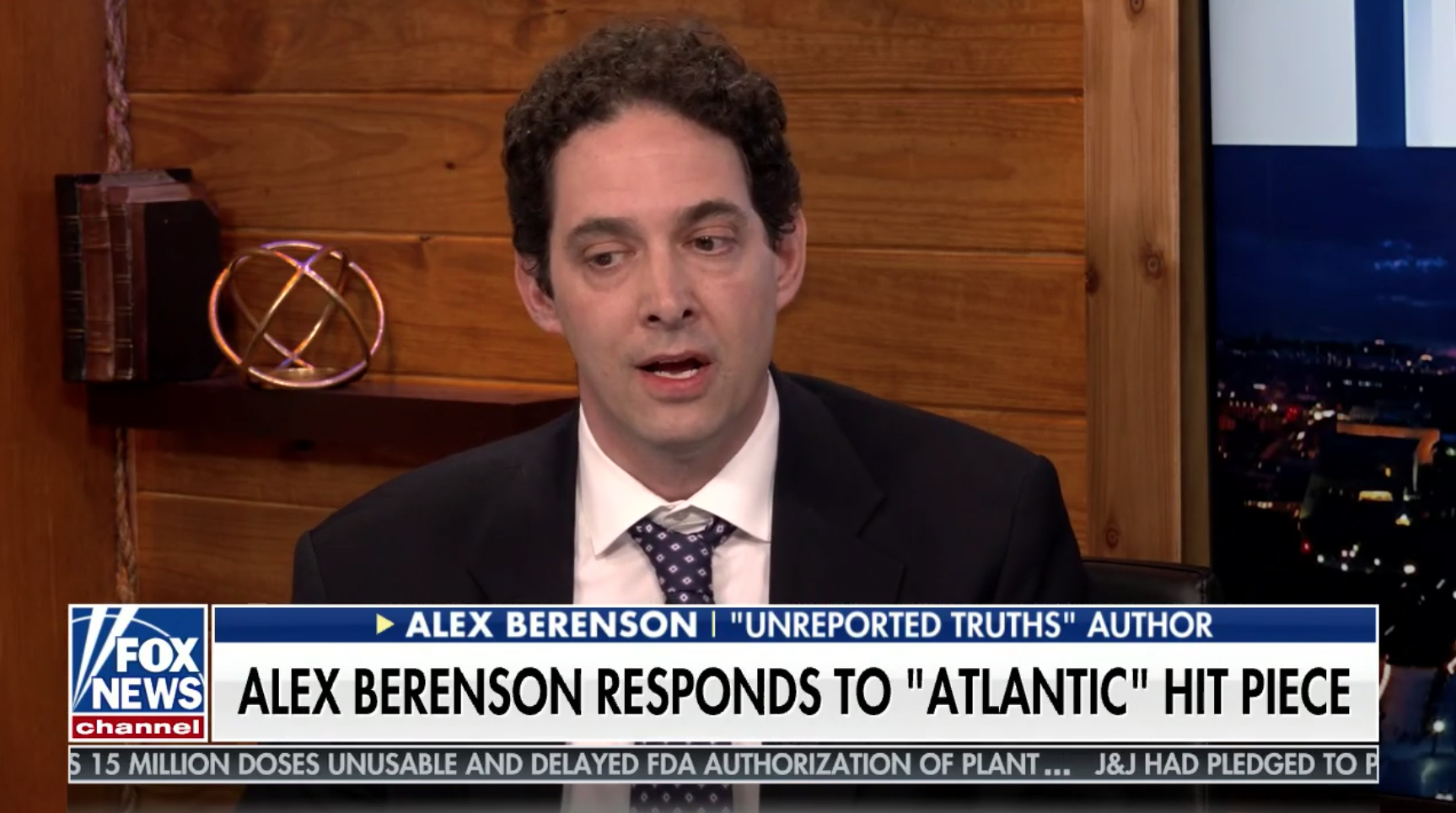 TV networks have been slowly reintroducing in person guests, typically with social distancing. 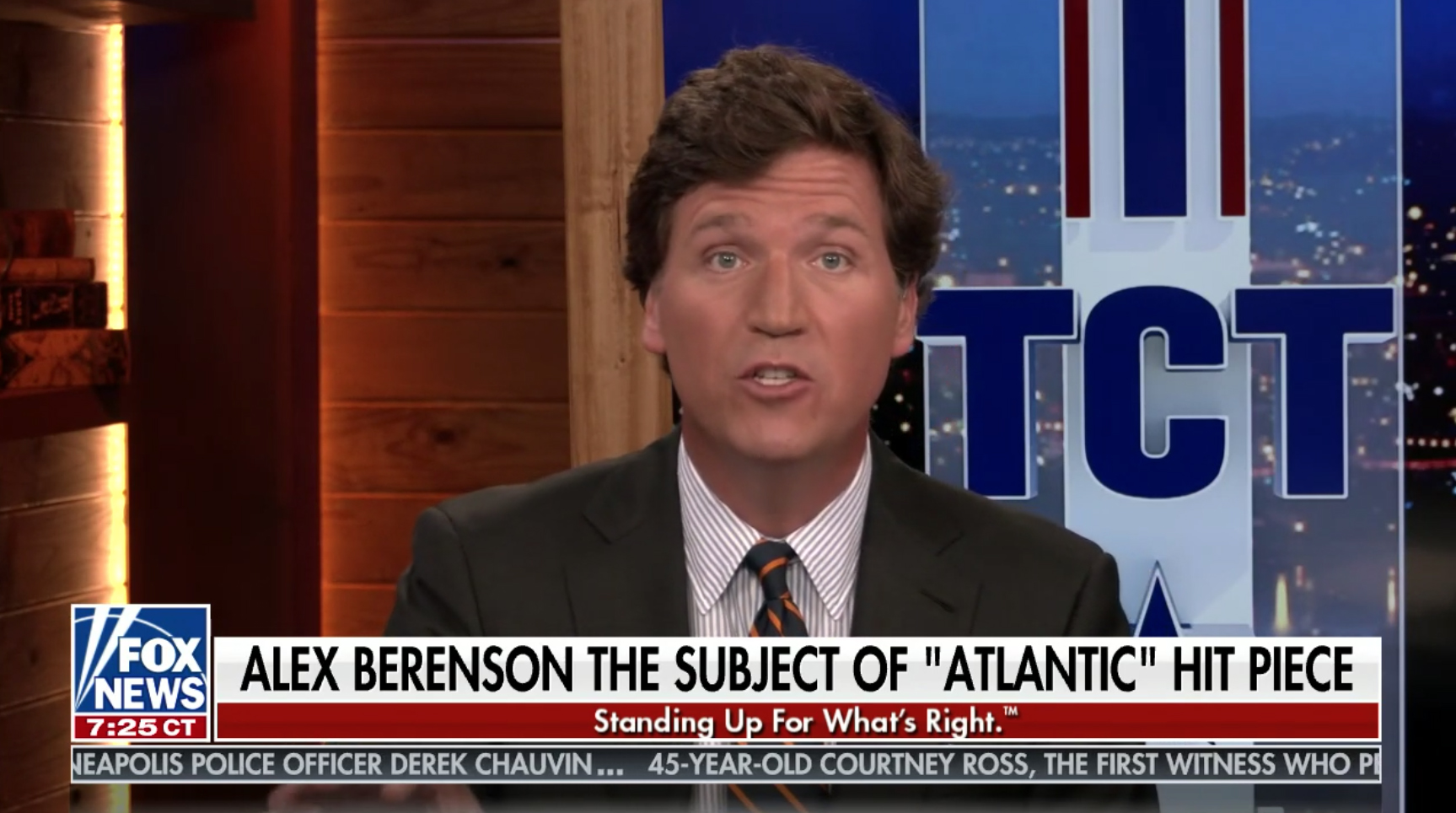 NewscastStudio checked with multiple sources and no one was willing to go on record to indicate who designed the set.

None of the designer sources NewscastStudio contacted would go on record taking credit for the set either.