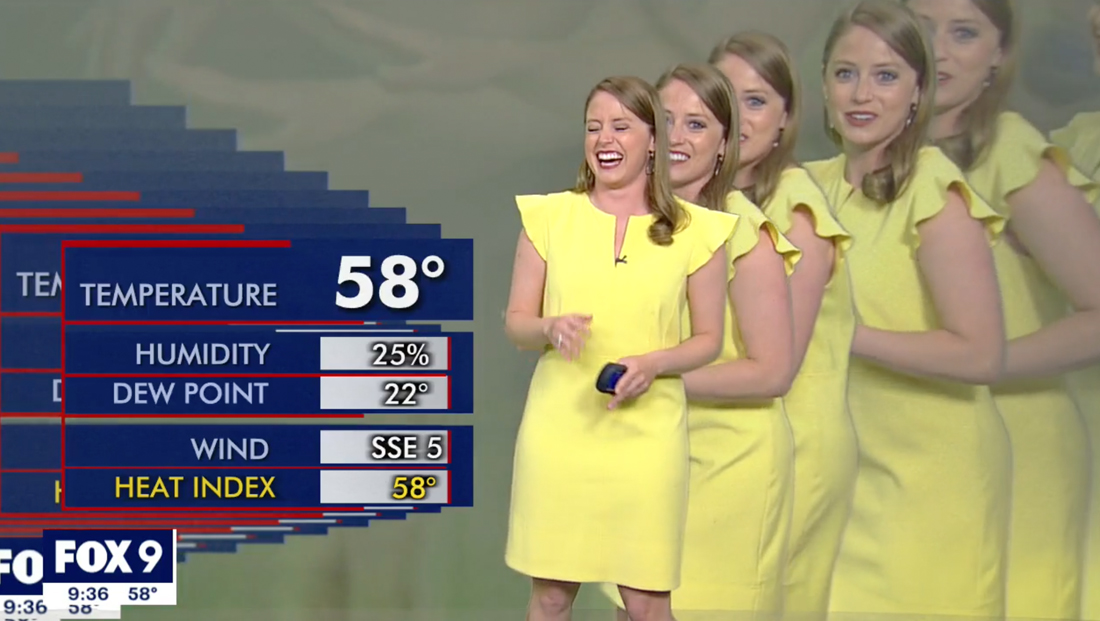 “Do you guys want one Jennifer? Or two Jennifers? Or three…?”

That’s the question KMSP meteorologist Jennifer McDermed found herself asking during a dizzying on air technical glitch during a May 11, 2021, forecast.

As she was covering some regional temps, the effect “took over” — causing the signal to appear to zoom in while also forming a strange trail of ghostly, repeating images that some have equated to the polygon screensavers popularized by Microsoft Windows in the 1990s.

Everything from McDermed, wearing a sunny yellow dress, to the map behind her and even the station’s bug in the lower left began repeating itself, much to the amusement of her and others in the studio, who could apparently see the issue on their return monitors.

She managed to get through the glitch by having a little fun with it — since trying to convey weather information was probably pointless with the graphics in the condition they were in.

It wasn’t clear if the issue was with the weather computer that generates the graphics or something upstream at the Minneapolis–St. Paul station.

The fact that McDermed’s feed and the bug fell victim to the odd visual “effect” seems to indicate the issue may have been more than just with the graphics computer since bugs are typically inserted either by either the control room or master control and not the weather system.

Also, in theory, if the issue had been with the weather computers, it’s unlikely McDermed would have been duplicated since, in standard production setups, her image would be matted over the weather maps using chroma key technology and any glitches caused by computer in the weather center would have more likely affected only the maps behind her.

The glitch was somewhat reminiscent of the repeating “gateway to hell” technical glitches Chicago TV station WLS experienced in 2015 into 2016.