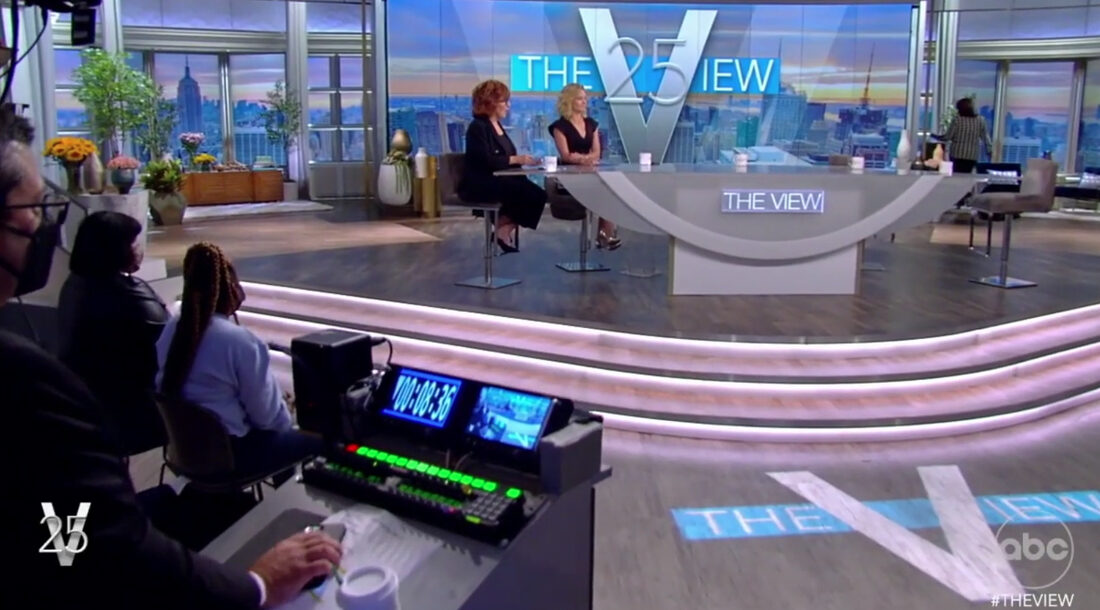 Two co-hosts of ABC’s “The View” were abruptly pulled off set and Vice President Kamala Harris was forced to appear remotely due to a last minute COVID-19 scare.

After the first break on Sept. 24, 2021’s show, co-host Sunny Hostin and guest co-host Anna Navarro were told, live on air, that they needed to exit the studio.

A befuddled Joy Behar asked executive producer Brian Teta, who was standing off set, if she should introduce Harris, and he initially said “yes,” before another voice in the studio yelled “no!”

Teta, who wears a microphone tied into the control room audio board so he can banter with the hosts if needed, joked “it’s a tease” as Behar said they would explain why Hostin and Navarro were pulled off set later.

After returning from what appeared to be an unplanned break, Behar, who was serving as moderator since Whoopi Goldberg was out, explained the network had just learned Hostin and Navarro received positive COVID-19 tests and that they were removed as a precaution for fellow co-hosts, crew, audience and Harris.

The show had been promoting Harris’ interview as “live” and “in studio” and she was slated to sit at the table — socially distanced — for the interview, but those plans were scrapped.

Behar noted Hostin and Navarro’s cases, if confirmed, would be considered “breakthrough” since both women are fully vaccinated, as required by Disney and ABC policy. As on air talent, they are exempt from wearing masks indoors when on the air according to network, union and other protocols and guidelines — thought the reduced studio audience and crew was fully masked.

It’s not immediately clear what type of test was used — some are more accurate than others — but it seems logical that the White House and the Secret Service would be requiring anyone scheduled to be around Harris (or any number of officials) to be tested in the time leading up to the event.

Meanwhile, Behar and Sara Haines, the only two remaining co-hosts, moved the middle of the table, which they noted had been cleaned during the break, and began taking audience questions in order to fill time — but since the Q&A wasn’t planned, audience members didn’t have a microphone to speak into, so the show had to rely on ambient mics to pick up their questions.

Behar then explained that Harris would still appear but would be interviewed from another part of the building due to the COVID-19 test scare, presumably to keep her separate from the studio and backstage areas of the show.

After a few rounds of this, the show returned and proceeded with the interview, though it wasn’t immediately clear where Harris ended up.

Her lighting wasn’t ideal and the background behind her, which appeared to be a printed background rather than LED screen, hasn’t been something that’s shown up on network air in recent memory.

She was also using a white set of ear buds as an IFB to hear the hosts’ questions. She was, however, wearing a lavalier mic.