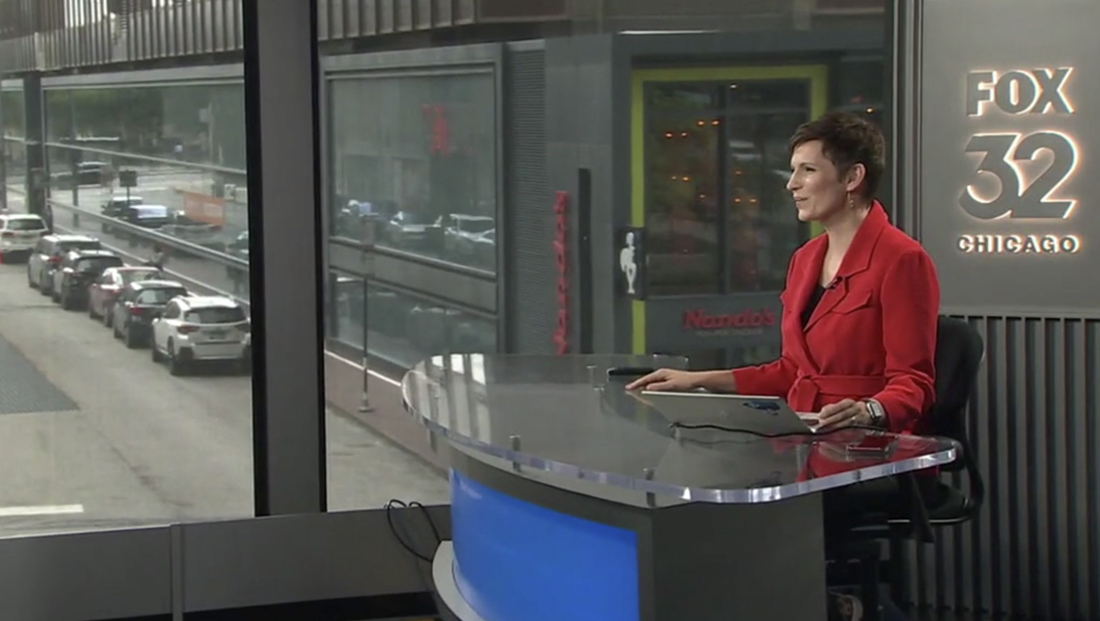 WFLD, the Fox-owned station in Chicago, has updated a second-floor windowed space to be more flexible and cohesive with its main studio look.

The station, which operates out of the Michigan Plaza complex at 225 and 205 Michigan Avenue, has used a small portion of the second floor on the southwest corner of the building for years, which sits above a CVS. 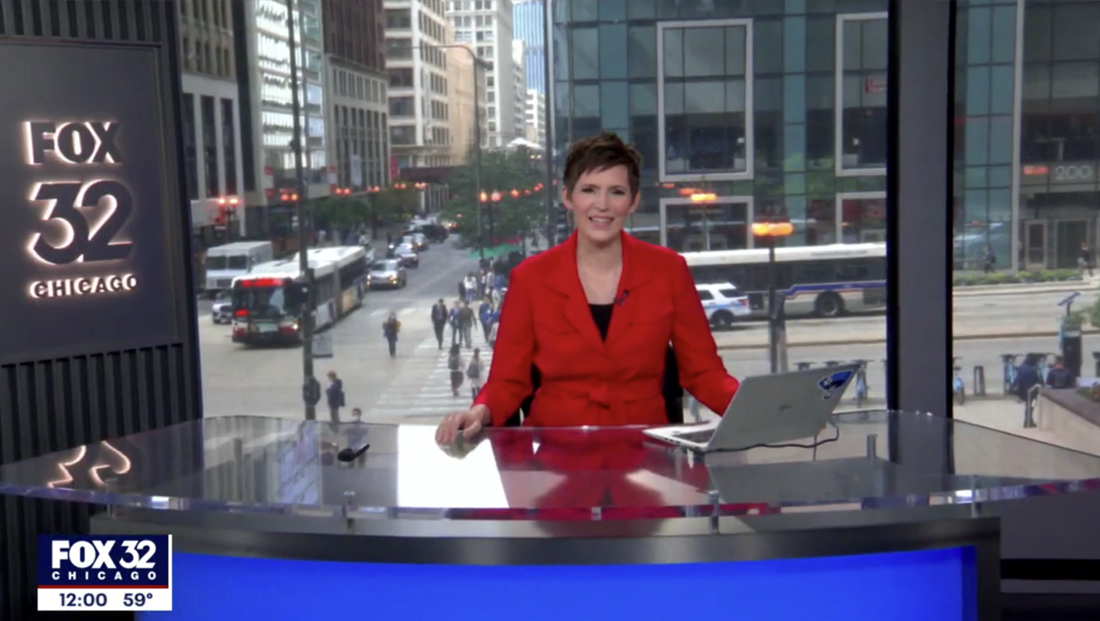 The space is a “corner office” type configuration and the station has access to multiple bays of windows, though it covers one of the ones facing Michigan Avenue to allow for more enclosed studio space.

Before adding additional scenery, the space was more barebones and would often show up on the station’s morning show “Good Day Chicago” for lifestyle segments, but little was visible beyond just a table and the window’s view.

Now, however, the station has brought in additional elements to give it a cohesive look with the main set from Clickspring Design downstairs.

The corner of the space features a Fox 32 branded panel covering the structural column with a vertical line texture and dimensional, lit station logo similar to those found on the main set and a small anchor desk, which appears to be the one designed for the main studio, that backs up to a westward view that includes the intersection of Lake and Michigan avenues.

This gives the cameras a view of one corner of the “L” elevated train tracks that form the famous “loop” about a block off Michigan.

This corner is one of the busiest in the city’s train system, so seeing a train rounding the corner is a common sight behind the main anchor position — sometimes to the point of making it look like the anchor is in front of a looped video background.

The space is used for select segments of “Good Day Chicago” as well as all of the single anchor noon newscast (with the exception of weather).

Since there isn’t a video wall behind the anchors in this studio, like on the main set, the station has the option of using more traditional OTS overlays or a large wild monitor cart unit that’s typically positioned camera right of the anchor area and also serves as a divider in the space. 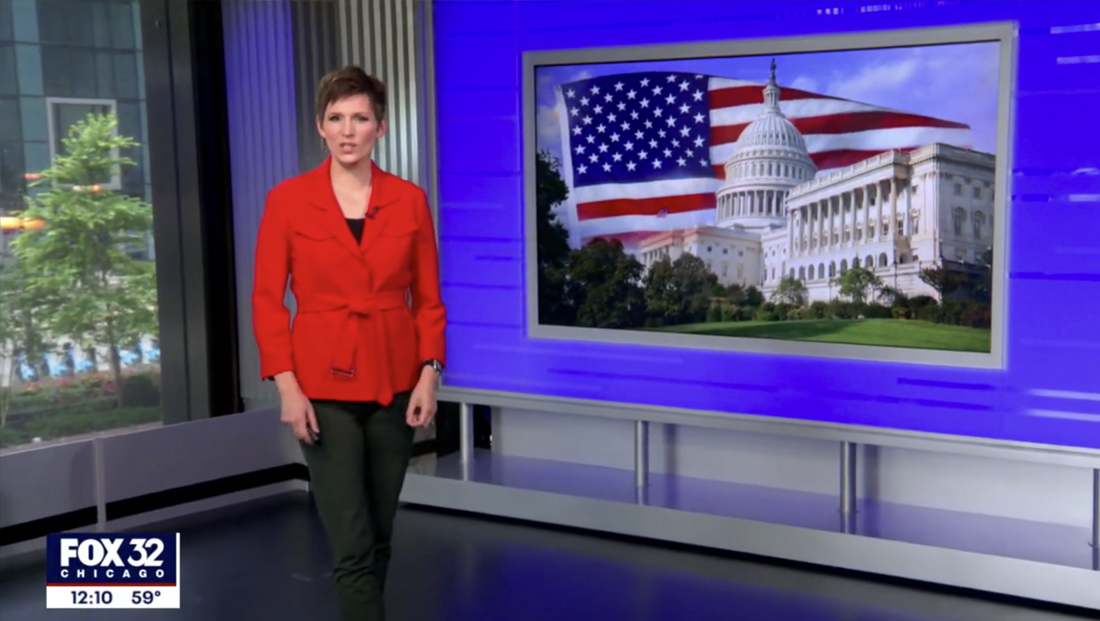 This monitor unit also features backlit frosted glass with horizontal banding accents that are found in multiple parts of the main studio.

Behind this is a large wall that covers a section of windows that intersects with a faux brick one and features a variety of movable features, including a monitor on a cart, high boy table and chairs and decorative trusswork, creating a flexible, multipurpose area.

The bricks texture is brought out thanks to dramatic angled downlighting, part of Devon Allen’s lighting plan.

The wall graphic in this space is flanked by two vertical elements that mirror the corner one, sans dimensional station logo. 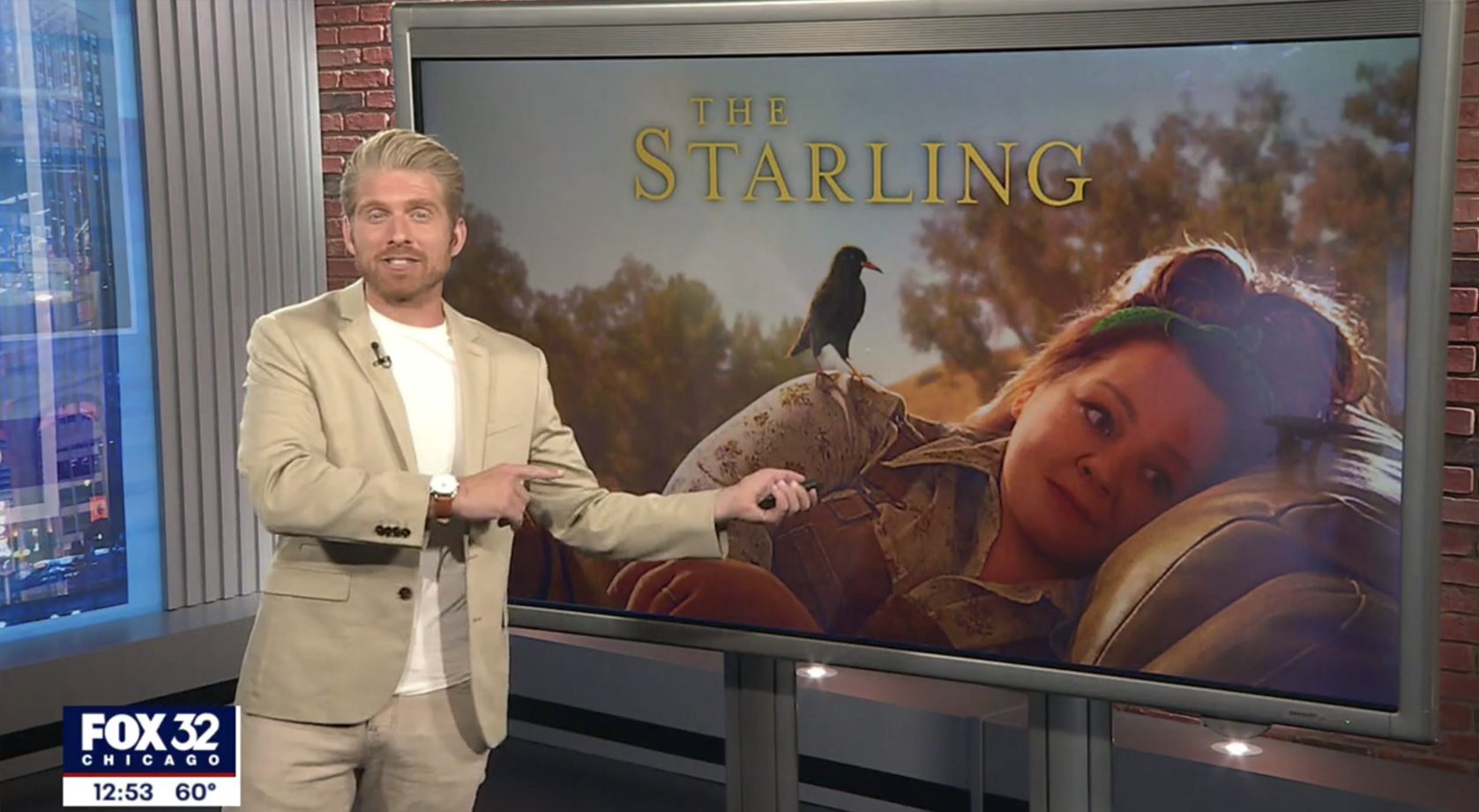 Covering the windows is an advanced shade system that can be adjusted to match the lighting conditions outside. It uses a remote-controlled interface that the person who controls the robotic cameras, audio and graphics can quickly use to make tweaks on the fly. 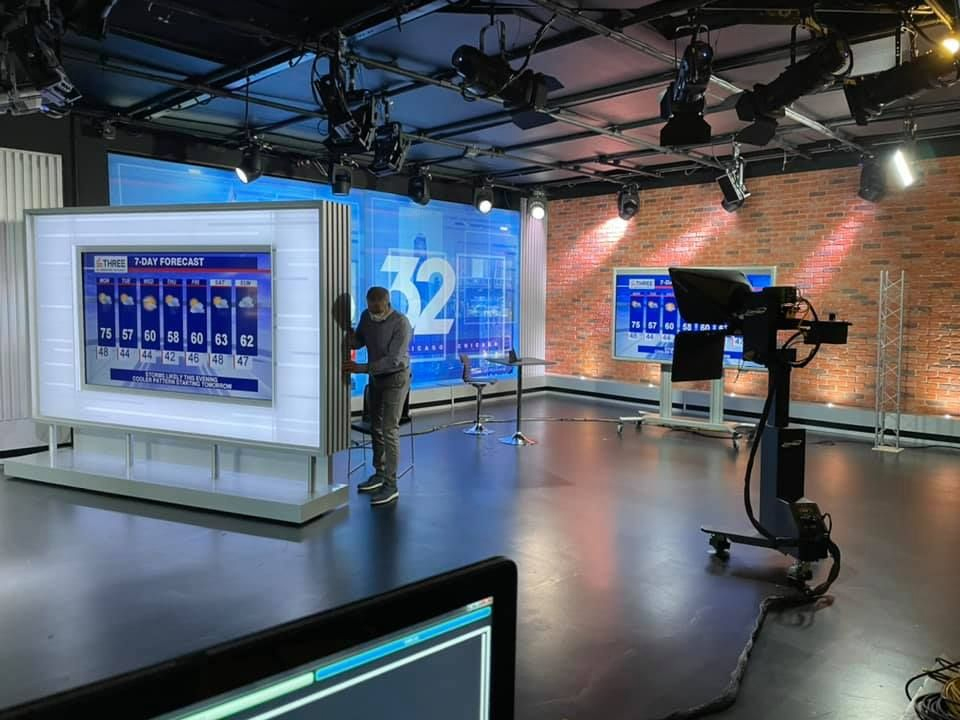 In this wide view of the space, the movable video panel is shown being adjusted by a staffer. The main anchor area is to the left, with the multipurpose area to the right.

Chicago was once full of streetside and windowed studios, with all three of the “big three” affiliates operating one at one time.

Of these, only ABC-owned WLS still operates its State Street Studio, which serves as the primary home for its “Eyewitness News” broadcasts.

CBS-owned WBBM previously had a streetside corner studio but closed it 2017 in favor of a traditional fully-enclosed studio. It has since put the space up for sub-lease, though it has yet to find a permanent tenant.

WMAQ, the NBC owned station in the market, previously operated a streetside studio along North Michigan Avenue (which is farther north and over the river from where Fox 32 is) for its morning and midday newscasts but closed that in 2013 in favor of having all newscasts originate from the NBC Tower.

WFLD’s new space doesn’t technically qualify as a “streetside” studio since it’s on the second floor and passersby can’t directly look in the windows, though this also likely reduces the need for security measures and visibility of anything objectionable happening outside the building.

In addition to the space on the second level, WFLD has two large studios on the ground level of the building, one of which is used as its newsroom.