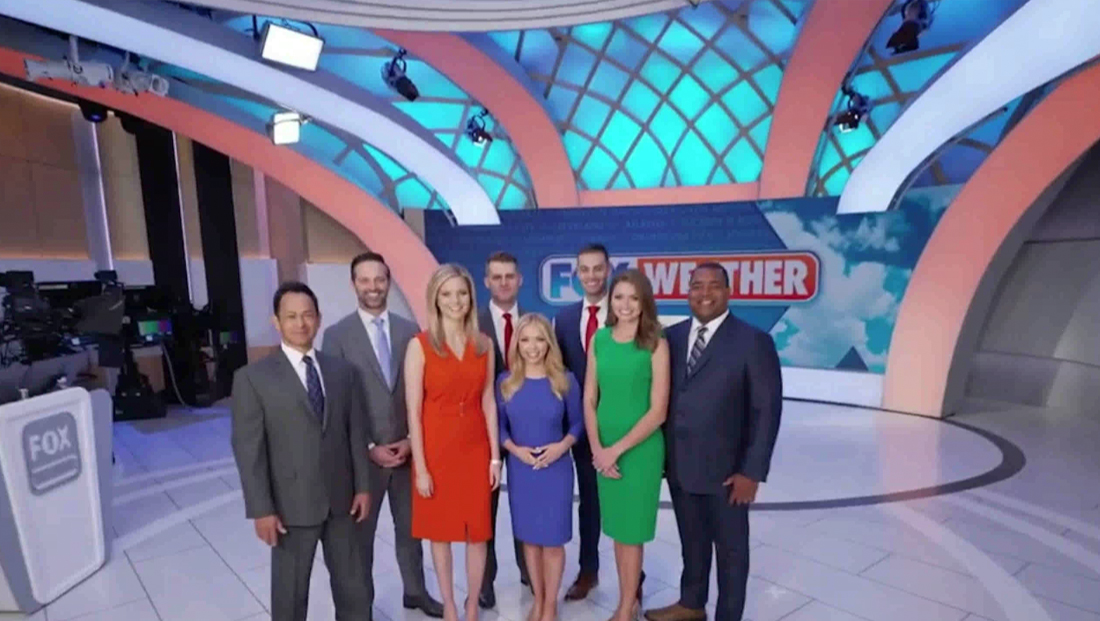 The upcoming digital Fox Weather service has begun airing over the top promos for its app and, by extension, the offering as a whole.

“This app is about to change the way you think about weather,” says a male announcer.

“Welcome to a new world that will blow your mind,” the voiceover continues.

“This has always been my passion,” says Britta Merwin, a former KPRC Houston forecaster, a line that seems a bit out of place. While it’s fairly obvious she’s referring to how weather being her passion makes her a good fit for the service, it’s still an odd edit.

Next the word “Precise” appears on the screen followed by former St. Louis KTVI meteorologist Brigit Mahoney showcasing the mobile 3D radar tech that is billed as “the first of its kind.” 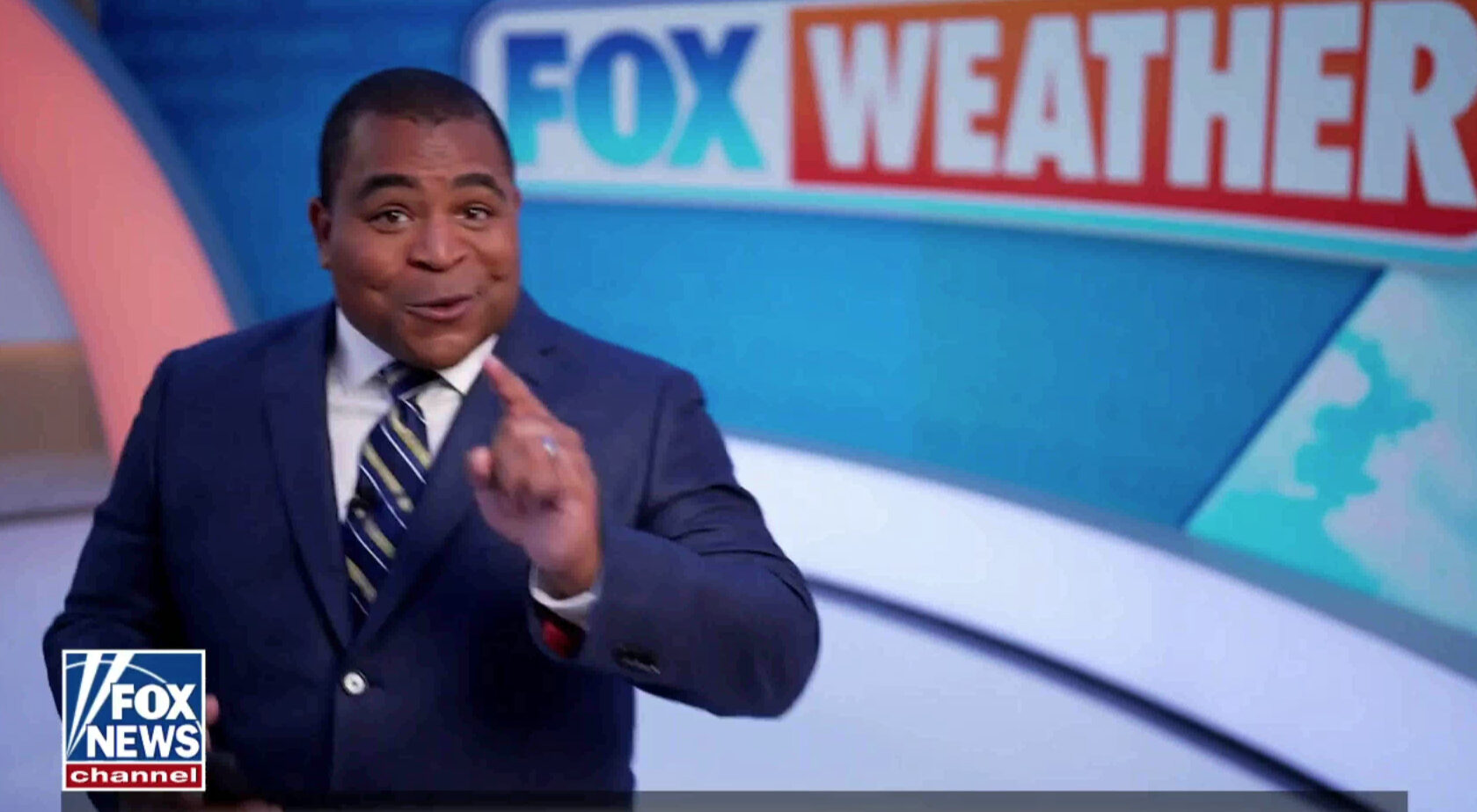 The word “Personal” then appears on screen followed by Jason Frazer from WKYC in Cleveland highlighting “Future View,” a feature that lets you see long term weather trends.

“We’ll cover severe storms like you’ve never seen before,” says Nick Kosir, who was hired from Charlotte station WJZY and is known for his viral dancing videos.

Other key members of the Fox Weather team are featured on screen at the end of the promo, standing on the service’s new set in Studio H.

Craig Herrera, Stephen Morgan, Ian Oliver and Kendall Smith are all part of the “team photo” at the end, though former WABC forecaster Amy Freeze is notably missing, perhaps due to contractual issues surrounding her leaving ABC 7.

The promo also gives viewers a wider view of the Fox Weather studio, which appears based around a central video wall installation with spidery internally lit “arms” extending up and over the ceiling and filled in with a morphed grid pattern in the header area.

This central LED wall includes curved sides that match the internally lit arms and also includes a circular floor decal. Additional curved accents are included over the rectangular tile look that runs on an angle.

Other elements include light wood toned walls with white panels with top and bottom edge lighting and a curved backlit element with vertical bars. 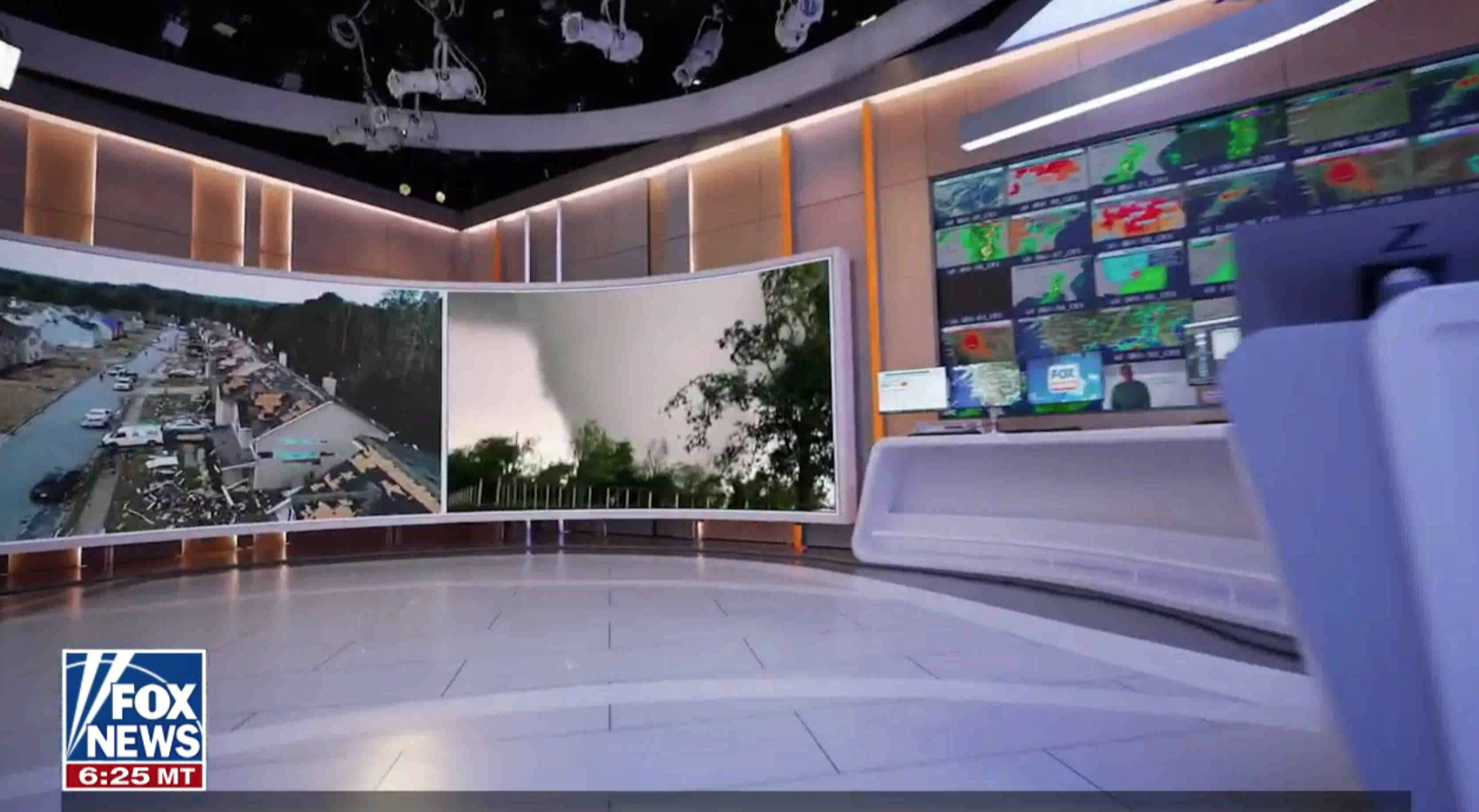 There also appears to be several large workstations in a futuristic white finish and backed with a large LED panel, a curved LED installation and a flat one flanked by dimensional Fox Weather logos in white. A smaller, pod-style workstation is also included. 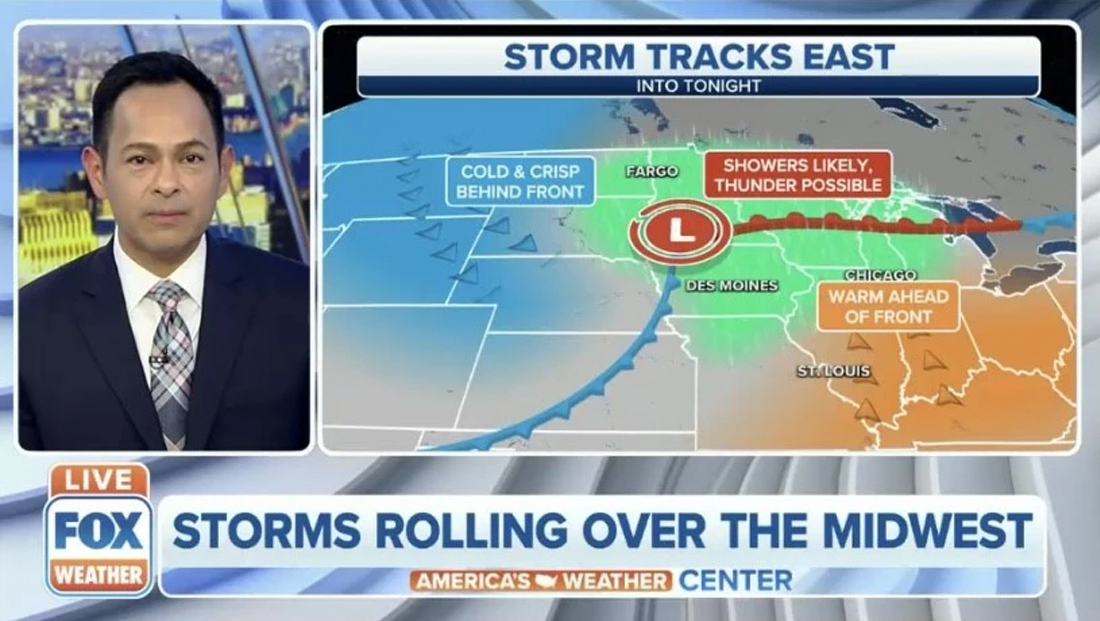 A sample screenshot Fox released earlier in the week appears to suggest the network will use 3D isobar textures as a primary graphic element, which would tie in with the “arm” elements, which could also be suggestive of motion and fronts.

Fox hasn’t clarified what, exactly, its “mobile 3D radar” offering is or what makes it unique, though technology that’s labeled in similar ways is already used at stations across the U.S., including some Fox owned stations.

“Future View,” at least from the demo screens in the promo, appears to present similar data that apps such as Apple owned Dark Sky uses and brands as “Time Machine” that combines historical weather observations to present past conditions and data along with modeling to “predict” the weather at a future point in time. 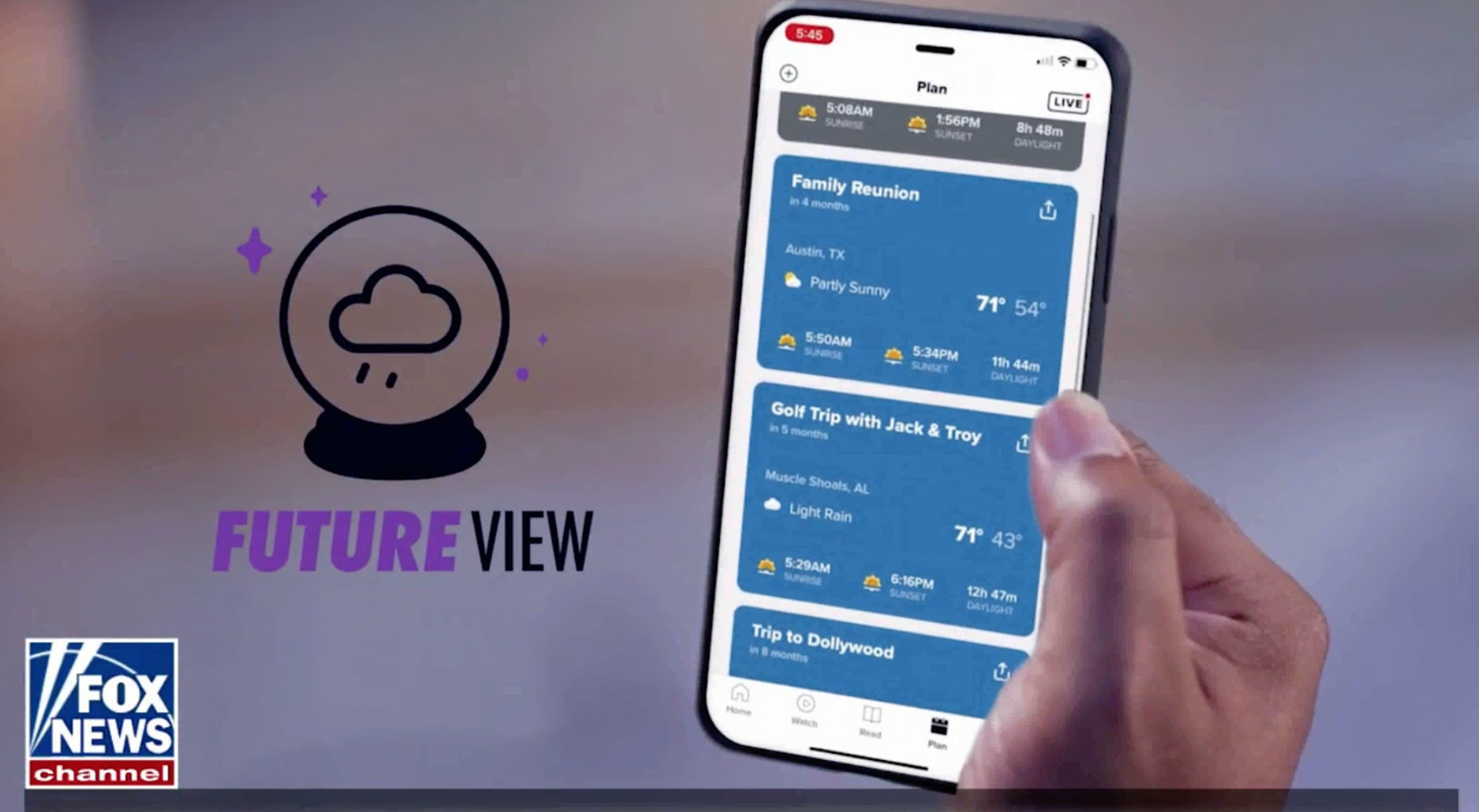 One twist that Fox Weather appears to be planning is the ability to create “cards” for future events with labels such as “Golf Trip with Jack & Troy” and access them from under a single “plan” area of the app.

In the sample screen shown, it also appears Jack and Troy’s buddy has a family reunion in four months and a trip to Dollywood in eight.

Fox Weather isn’t being distributed via traditional linear providers, but instead will be accessible via the website, mobile apps and smart TV apps as well as Fox’s Tubi streaming service. It’s also being integrated into existing Fox owned apps.

It launched Oct. 25, 2021, but the app is available for “pre-order” in select app marketplaces.