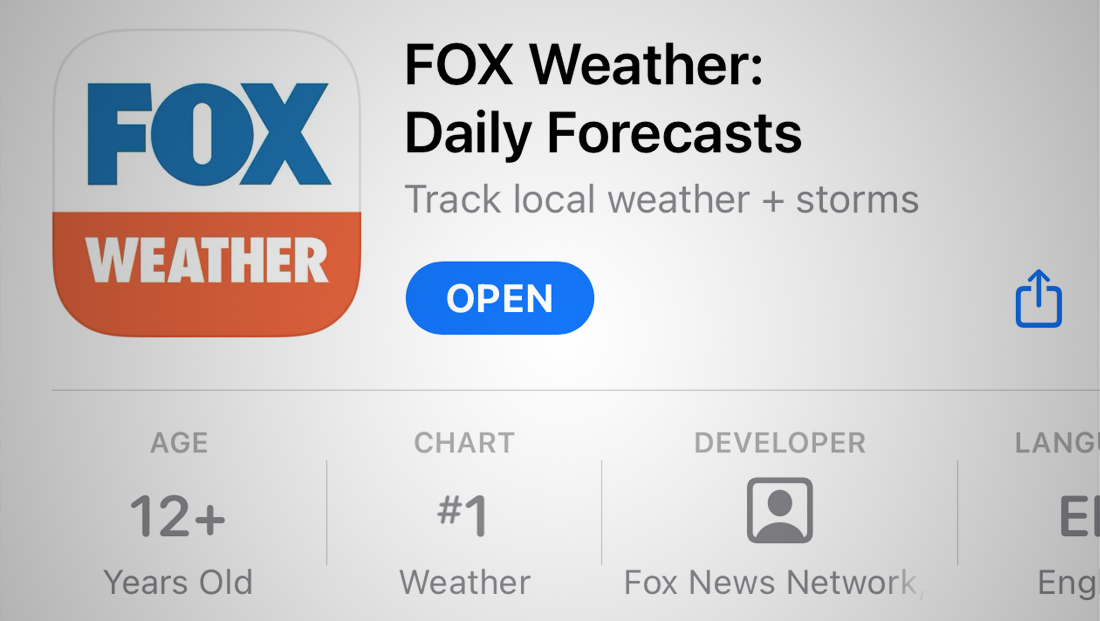 In addition to launching its Fox Weather a live streaming video feed, Fox also launched native iOS and Android apps Oct 25, 2021, that offer users access to that stream plus a plethora of other content — though none of it is quite as revolutionary as the network has making it out to be.

The Fox Weather app is available in Apple’s App Store and the Google Play Store and features a home screen that features a large “card” illustrating current conditions similar to how the native iOS weather app does — though the graphics don’t appear to be animated or as detailed as Apple’s. 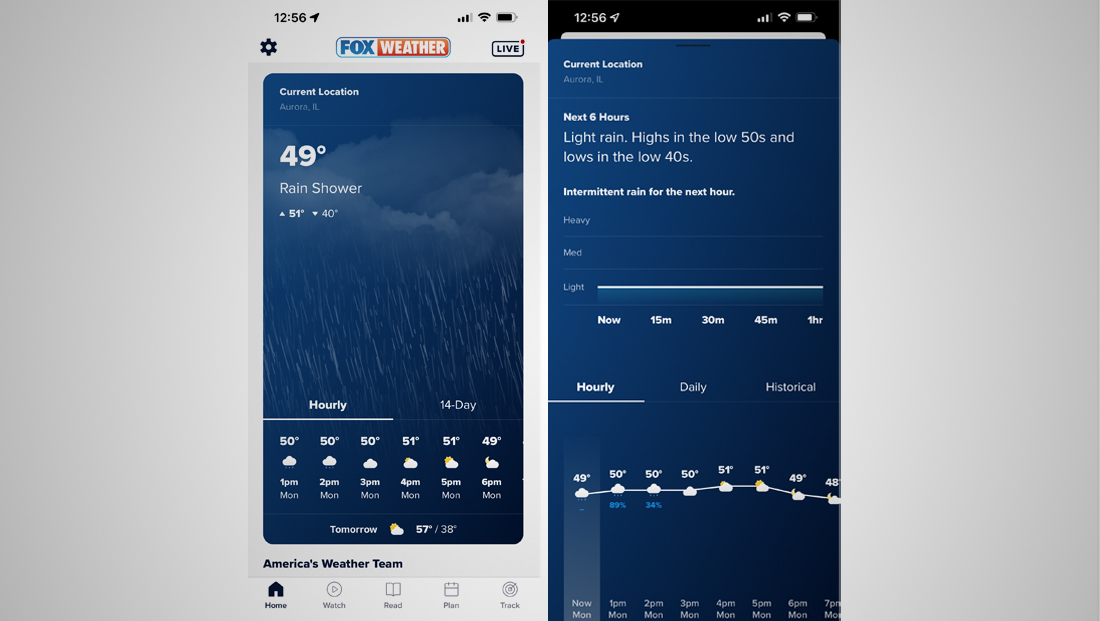 The card includes the current location, temperature, conditions and high and low temperatures, as well as tabs for hourly and 14-day forecasts.

Tapping the card makes it go full screen with more detailed presentation of the information, including enhanced data visualizations.

Meanwhile, back on the main home screen, scrolling down showcases links to stories that load from FoxWeather.com in a standard browser, rather than a more streamlined, and perhaps faster, in-app load.

Both the in-app experience and FoxWeather.com pages include ads.

For those who don’t have or can’t get a native app, much of this functionality is available FoxWeather.com via any standard web browser.

However, during NewscastStudio testing Monday, Oct. 25, 2021, the experience was buggy — with the “play” button appearing cut off and unclickable until, interestingly enough, we switched to a browser with an ad blocker enabled; this allowed the videos to play.

However, every time the live stream went to commercial break, the website appeared to function as if the clip was over and dropped out of the feed, making it frustrating to watch it on a continuous basis.

Other main areas of the app include a “Watch” tab that showcases the live feed as well as on demand clips on both recent topics and explainer style content. the live feed can also be accessed from an icon in the upper right of most native app screens but is notably missing from the mobile FoxWeather.com pages.

“Plan” allows users to create events in the future and see forecasts based in historical data and trends. In the iOS version of the app, the date picker appears to go well into the year 3000 and beyond, but selecting any year in the future makes the setting reset to “2022.” It’s not clear if that’s a bug or means that events can’t be added beyond next year.

Finally, a “Track” tab opens up Fox’s much hyped “3D mobile radar,” which it claims as the first of its kind. 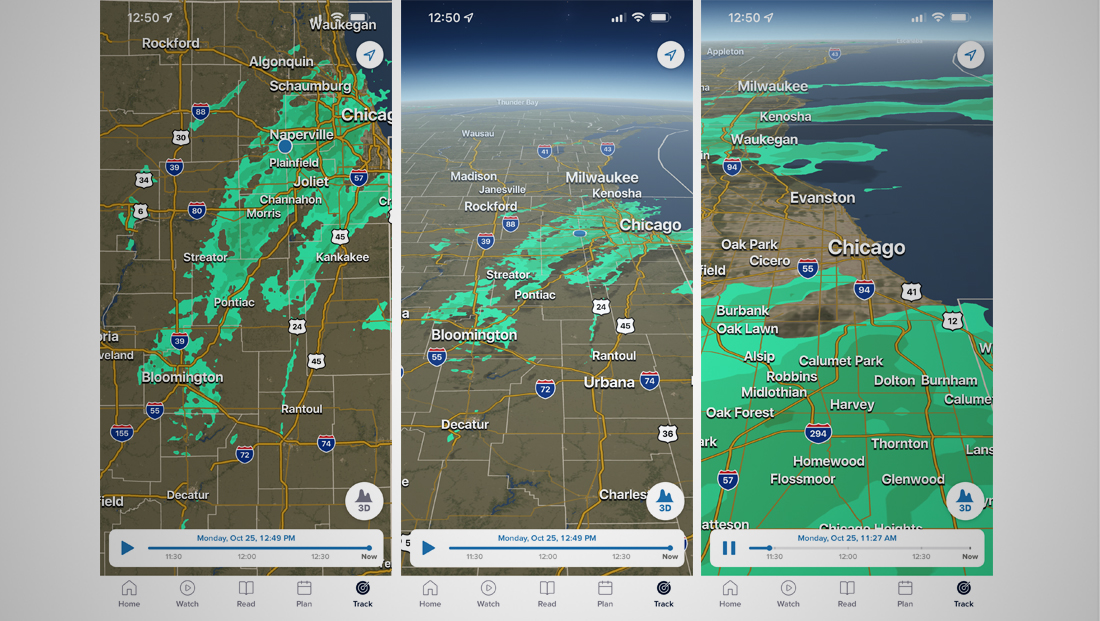 In reality, both the 2D and 3D radar included in the launch version of the app aren’t all that impressive.

The graphics appear to use a generic map, rather than the distinct gray styling Fox Weather uses, and the typography is generic as well.

The 3D radar features appears to just be shift from top-down view to “birds eye” view. The color blotches on the screen only get a touch of 3D in the form of low fidelity faceted changes in height “floating” above the ground with a shadow effect under it.

The radar also lacks the ability to zoom in very close, at least in the Chicago market where NewscastStudio tested the app.

The Chicago area has significant coverage from multiple National Weather Service radars and is home to a Fox owned station as well, though it’s not immediately clear where the maps are sourced from.

The app takes up 219MB of storage according to the official listing on the iOS App Store preview page — compared to around as low as 8MB to around 150MB for other popular weather apps.

For those with privacy concerns, Fox Weather’s disclosures on the Apple App Store indicate that it appears to use unique identifiers and usage data to track usage across other apps and websites, including those owned by third parties. It also links location, user content, usage data, contact info and identifiers, directly to users.

There are other popular weather apps that track a similar amount of data, but some gather and track significantly less.

Fox Weather did also release iOS “widgets” that let users access information from their home screens in a variety of sizes, but it hasn’t launched a distinct Apple Watch or iPad version of the app, according to the listing.

The app is also currently only available in English.

Corrections and editor’s note: In an earlier version of this story, we misidentified the “age” label of “12+” as the age of the app rather than its target audience, though in certain views this isn’t clearly labeled as an age rating. This has been corrected in the story. The original story also reported that the app was 600MB in size. This figure was taken from the “web preview” of the app hosted by Apple here. It’s not immediately clear why there are two different sizes listed, but we have revised the story above to reflect the lower number listed on the iOS App Store. Normally NewscastStudio does not republish errors but rather notes that corrections have been made about certain reporting. However, we felt it was important to bring some context to the errors in the original version of the story.