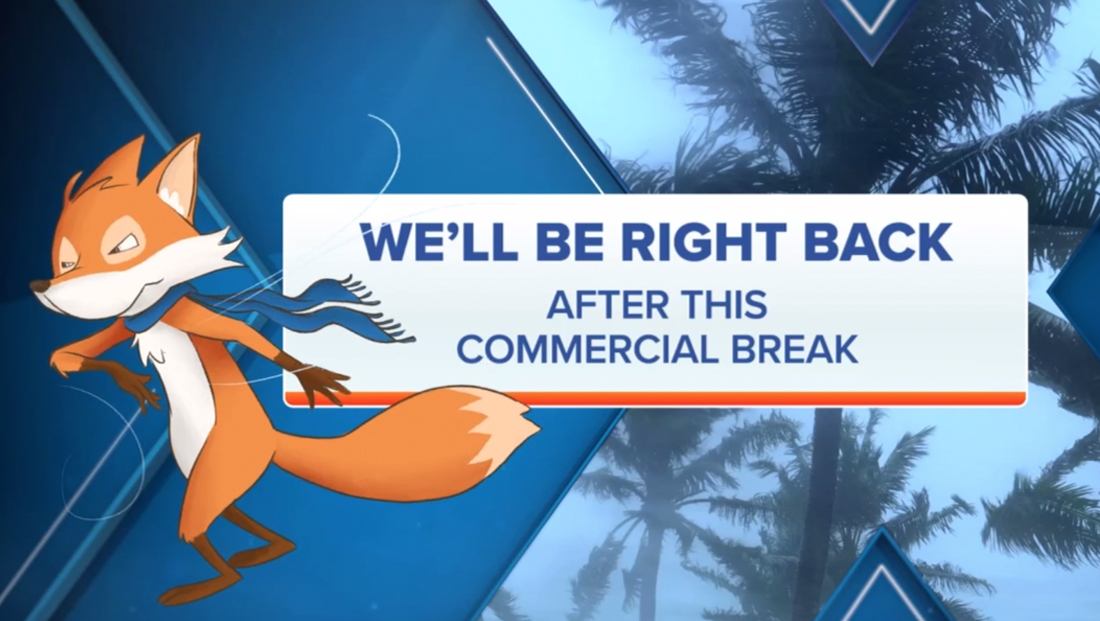 Along with the debut of Fox Weather, viewers also got to meet “Sonny” (that’s a pun on “sunny” in case you didn’t get that), a cartoon fox who apparently loves standing out in the elements.

The orange colored Fox appears on a variety of places, including on the tail end of select commercial breaks, where the fox is show in a gust of wind set against a blue background with an oversized version of the Fox logo’s “X” showcasing palm fronds getting a similar beating.

This type of “vanity card” is common on streaming networks who use it as both a branding opportunity and way to fill time. In some cases, these types of images are provided a “national” feed but can be covered by local providers if desired, though that does not appear to be the case with Fox Weather as of yet.

Sonny also shows up on the FoxWeather.com 404 pages when a user enters an invalid URL. 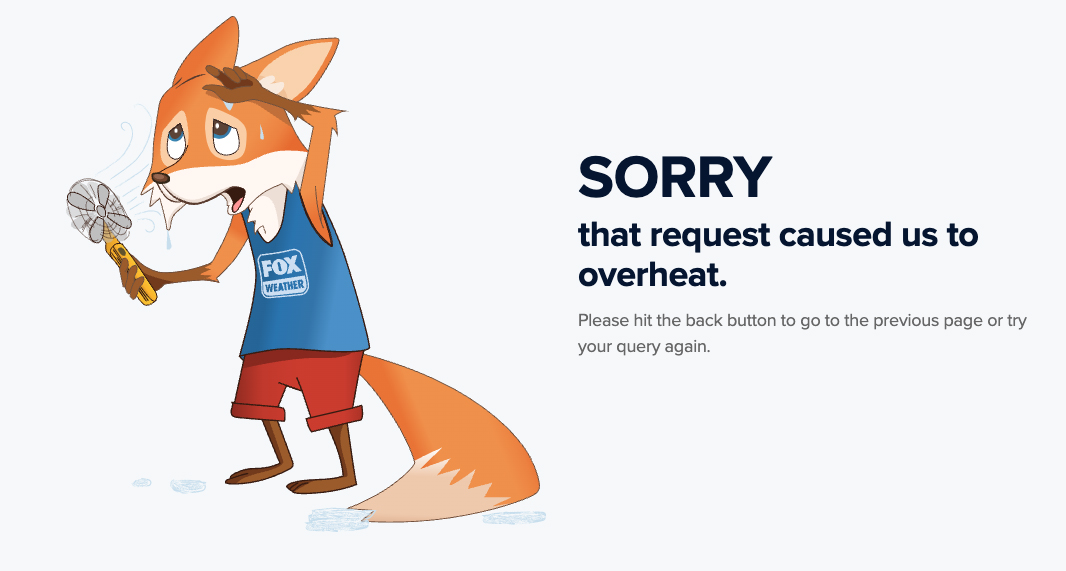 In this version, Sonny is a bit ‘overheated’ and is holding a handheld fan. 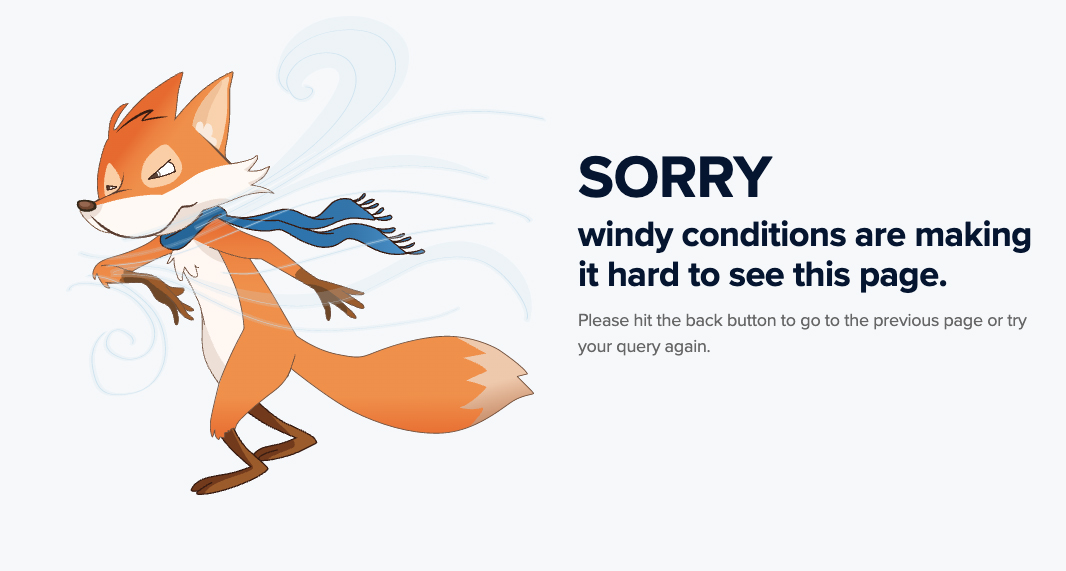 This version is similar to the one used on the network stream and references ‘windy conditions’ making it hard to see this page. 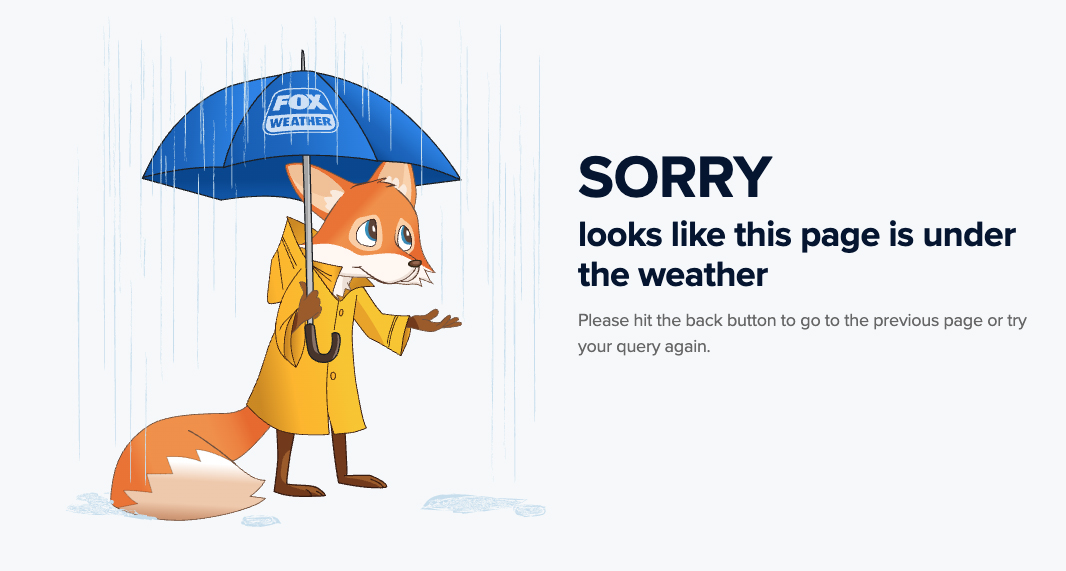 Rainy weather is apparently making Sonny down in this version, saying the page is ‘under the weather.’

“Simpsons” fans, meanwhile, have dug back in their memories and remember Season 16, Episode 17 of the show, “The Heartbroke Kid” — and despite an eerie record of “predicting” the future, the show didn’t get this one quite right. 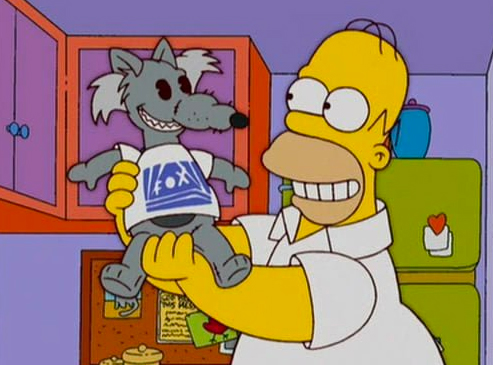 That’s when “Foxy the FOX Network Fox” first made an appearance.

In the episode, Foxy is portrayed as a gray stuffed animal wearing a light gray shirt with the Fox “searchlight” style logo on it — though the letters appear to be in all lowercase, in direct violation of the network’s official styling of the name.

“The Simpsons” is known for including subtle and not so subtle criticisms and parodies of its parent network.

The name Fox doesn’t directly refer to an animal — but rather William Fox, who founded Fox Film Corp. in 1915 and a chain of theaters using the Fox name in 1920.

Fox was born Wilhem Fuchs, but as a Hungarian Jew, was forced to flee the country and Anglicized his name.

The “Fox” moniker passed through corporate changes and mergers too numerous to count but eventually came under the control of Australian media magnate Rupert Murdoch who use it to launch the “fourth network,” Fox Broadcasting Company (think: The network’s cable channel might have ended up being called “Fuchs News”).

21st Century Fox, a new entity formed by Murdoch ended up selling most of its assets to Disney in 2019, which slowly began removing the Fox name from divisions.