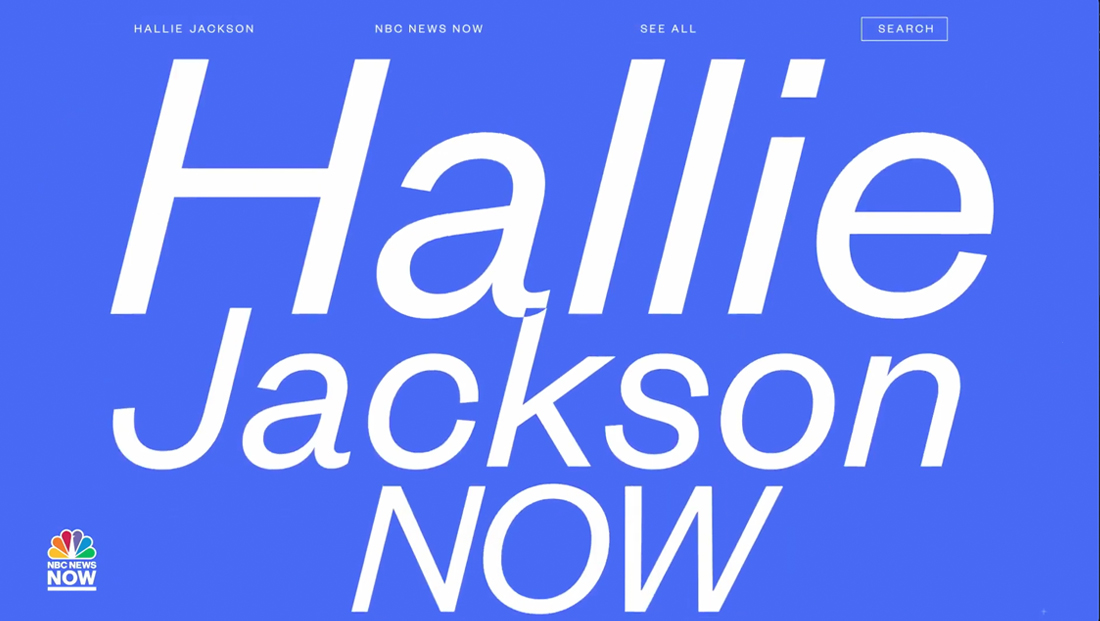 NBC News Now is adding another original program to its lineup, this one featuring Senior Washington Correspondent and MSNBC Anchor Hallie Jackson.

“Hallie Jackson Now” is set for a Nov. 15, 2021, debut on NBC’s news streaming service, which is available via a wide variety of OTT platforms and apps as well as through Peacock, NBCUniversal’s streaming service.

The name is in line with other original offerings on NBC News Now, including “Morning News Now” and the rolling blocks of coverage that use the name “NBC News Now Live” accompanied by anchor names.

The use of Jackson’s name as the first two words in the title is similar to MSNBC’s rebrand using the word “Reports.”

Jackson also anchors a show for MSNBC called “Hallie Jackson Reports” that is part of the broader banner of “MSNBC Reports.”

“Hallie Jackson Now” will originate primarily from Washington, D.C., as does fellow streaming show “Meet the Press Reports,” which is hosted by Chuck Todd, who also anchors “MTP Daily” on MSNBC and “Meet the Press” on NBC proper.

Jackson’s NBC News Now show will air at 5 p.m. eastern weekdays for one hour, putting it right up against the start of afternoon and evening news blocks in most markets in the eastern and central time zones.

“In a constantly changing news cycle, ‘Hallie Jackson Now’ will unpack it all, kicking off the streaming network’s evening programming with new reporting, going beyond the headlines of politics and Washington,” the network announced.

The broadcast is promising a fast pace and high story count.

“During the weekday program, Jackson will lean on her deep experience as an anchor and reporter to guide viewers through how the news impacts them, and will rapidly dissect the stories that matter most with NBC News’ reporters and correspondents in the field at the center of them,” the network continued.

“It’s the news for people who love the news. That’s our goal,” said Jackson. “I’m a reporter at my core and we’re especially excited to showcase the incredible work that my friends and colleagues across the network are doing, and to pull back the curtain to show our audience what it’s really like to bring these stories to life.”

“Hallie Jackson Now” will feature “The Original,” a regular segment of longer form exclusive reporting and “The Backstory,” a behind the scenes look at how NBC journalists and crews get the news ready for the air.

In the first week of programming, “Hallie Jackson Now” will stream a first-person reported story on mental health featuring a trip to “burnout camp’ in North Carolina, and will take an in-depth look at the hugely popular online influencers connecting directly with millions of teens – except they’re not actually humans at all.

The launch of “Hallie Jackson” follows “Top Story with Tom Llamas,” the network’s first primetime program, helmed by former the former ABC News anchor that NBC hired away earlier in 2021.

The moves are all part of a broader and significant investment in streaming on the part of NBC News.