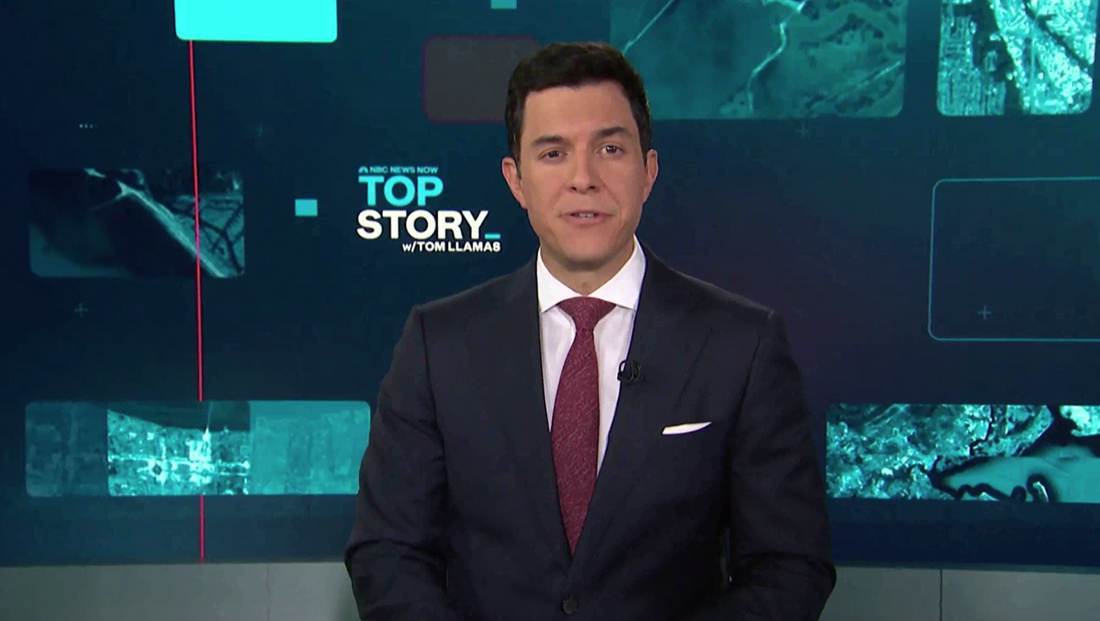 The show kicked off with approximately 90 seconds of tease headlines with imagery wrapped with an amber-orange rounded rectangle frame and a bold text headline in the lower left with a teal border segment that “snakes” around the text box. 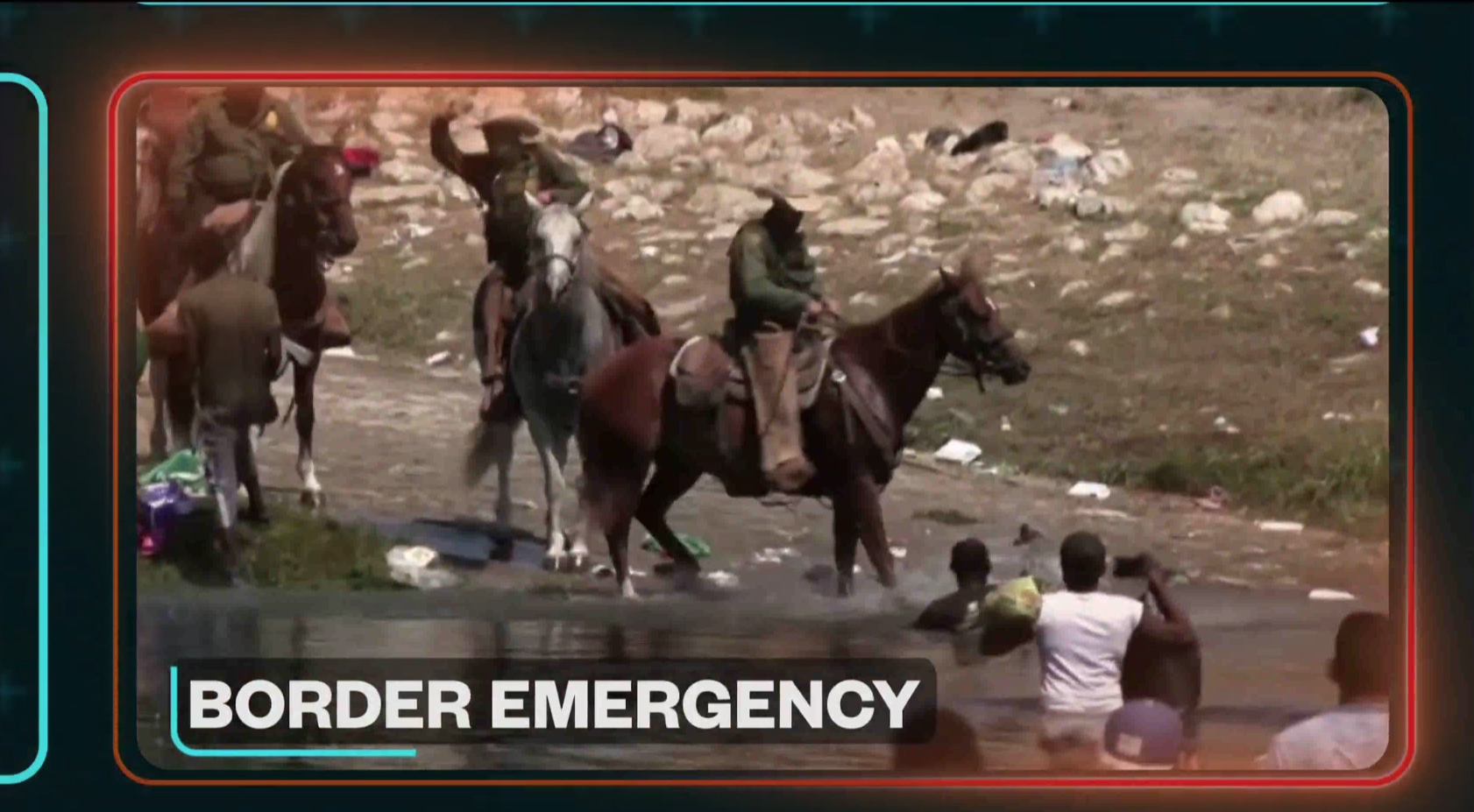 Between each story tease, the views zooms out and shifts to another frame featuring the next story, with it enlarging to fill most of the screen.

The effect is similar to a menu screen on a streaming box, with each rectangle representing an “app” or “channel.”

Much of the text in the show’s look is animated using a combination of flashes of oversized lettering and segmented reveal effects.

After the teases, the view zooms in on an animated NBC News Now logo — which is different from the one used throughout the rest of the channel’s day.

It features a spinning “loading” effect in the colors of the peacock feathers that eventually resolves into the peacock, sitting on top of the service name set in what appears to NBC’s bespoke Wordmark font.

The lockup has the word “Now” larger under the “NBC News” letters, along with a thick underline. This logo, however, is different in that it doesn’t have the red box for the word “Now.”

NBC News Digital did not respond to a request for comment if this new look will be used on other programming, but as of now the red boxed version is still being used outside of “Top Story.”

A similar animation is used for the bug that appears in the lower right corner of the screen. 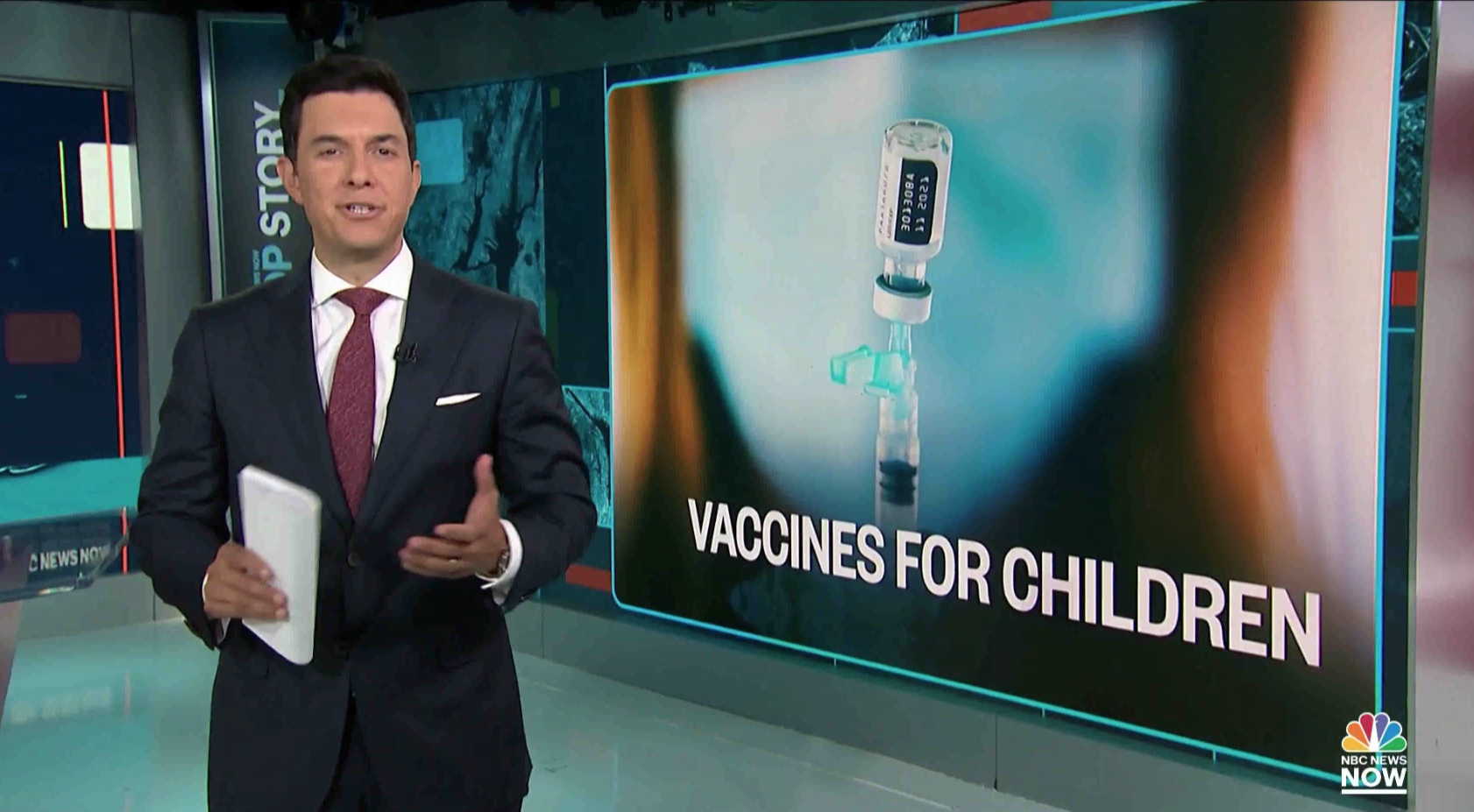 The top story of ‘Top Story’ uses a larger video wall graphic, as does its closing story.

The rest of the show appears to use the Founders Grotesk font family, including for video wall and insert graphics.

After that logo appears, the show’s stylized logotype is shown before cutting to the studio.

The show kicked off with a handheld shot walking quickly toward Llamas, who was standing to introduce the show’s lead.

“Top Story” broadcast from the semi-enclosed part of Studio 4E that overlooks the network’s main newsroom inside 30 Rockefeller Center, though the newsroom backdrop wasn’t used and it appeared the view was mostly obscured thanks to blue uplighting.

Instead, the broadcast relied heavily on the two LED video walls installed on in the space while also leveraging its bold red glass topped anchor desk with a polygonal base.

Video wall backdrops were a dark blue with boxed monochrome satellite imagery of major cities along with repeating text and red accent rules.

The show’s logo was often positioned to one side of Llamas, though at times the shot wasn’t quite framed correctly and his body covered part of it.

When needed, a curved rectangular frame could “pop out” of the same area as the logo with video, photos and text pertaining to the story in question. 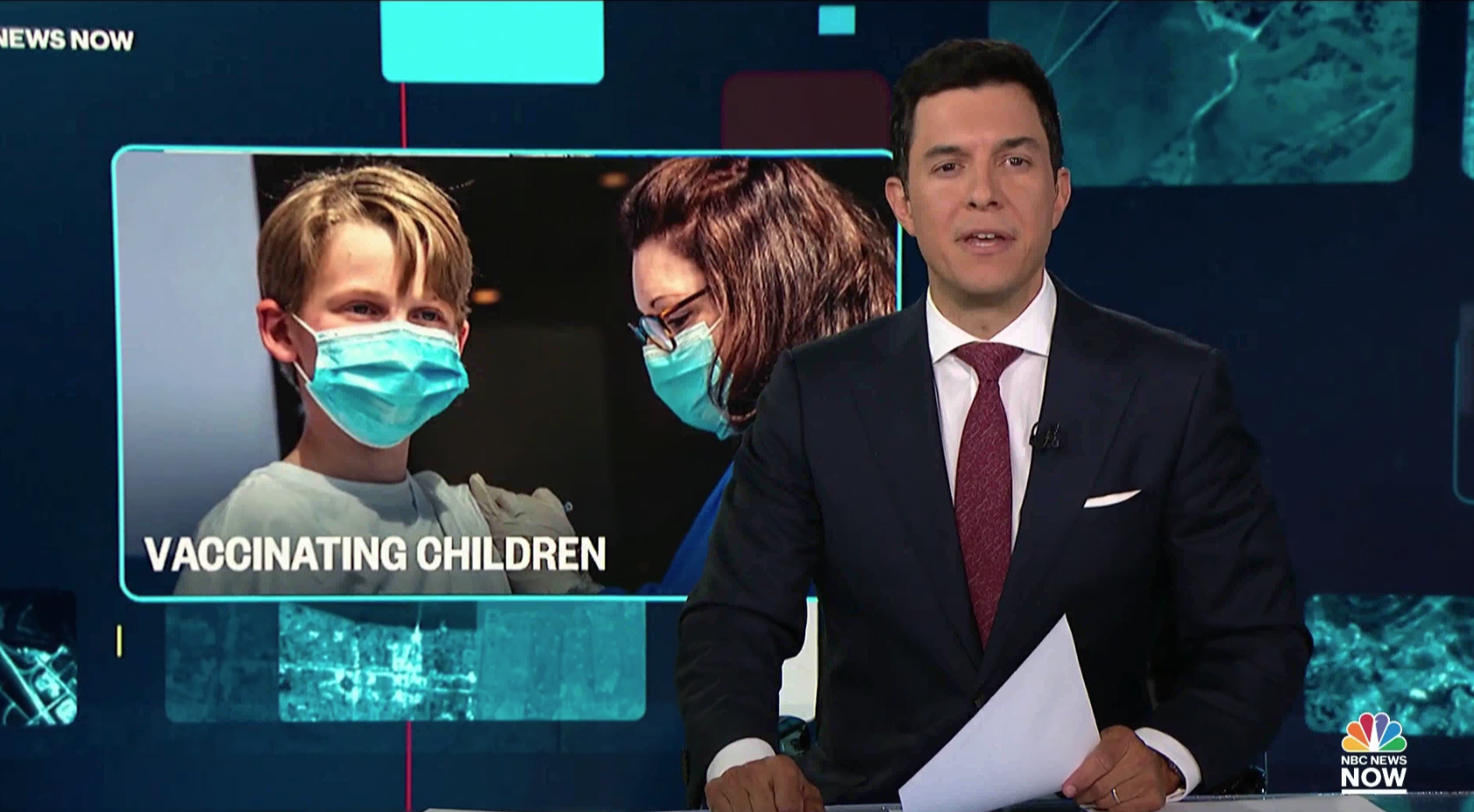 The smaller OTS-style graphics used when anchor Tom Llamas is at the desk.

Lower third insert graphics were comparatively small, especially considering the broadcast is likely to be viewed on a smaller screen tablets and smart phones. The clear glyphs in the font, however, could at least partially make up for that.

The show also appears to avoid “squeezing” extended lines of text into a single banner, unlike many other lower thirds on air today.

The graphics continued the rounded rectangular corners, but were centered in the screen, more within the 4:3 safe area. They graphics have the option to have a tier of text reversed out of the border color along the top, along with either one or two lines inside the box below.

For “coming up” teases, large bold text with reduced letter spacing appears on screen against a gradient background to ensure text remains legible. 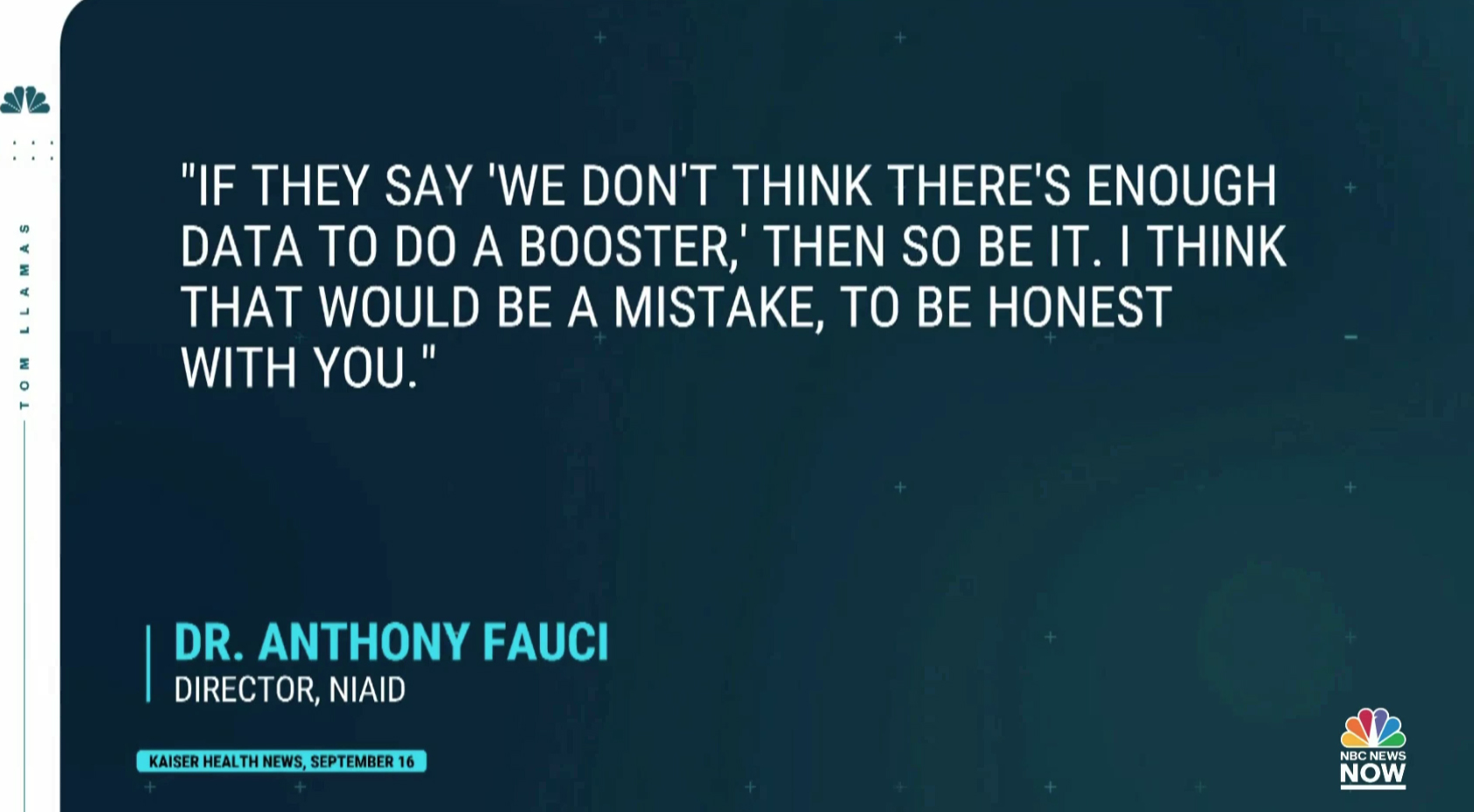 Also included in the look are fullscreens that can be used for pull quote style graphics, maps, charts and other similar elements.

These use a deep blue background with a thick white border on the left side with “Tom Llamas” microtext, a thin rule, dot accents and a solid color peacock before curved inward near the top. 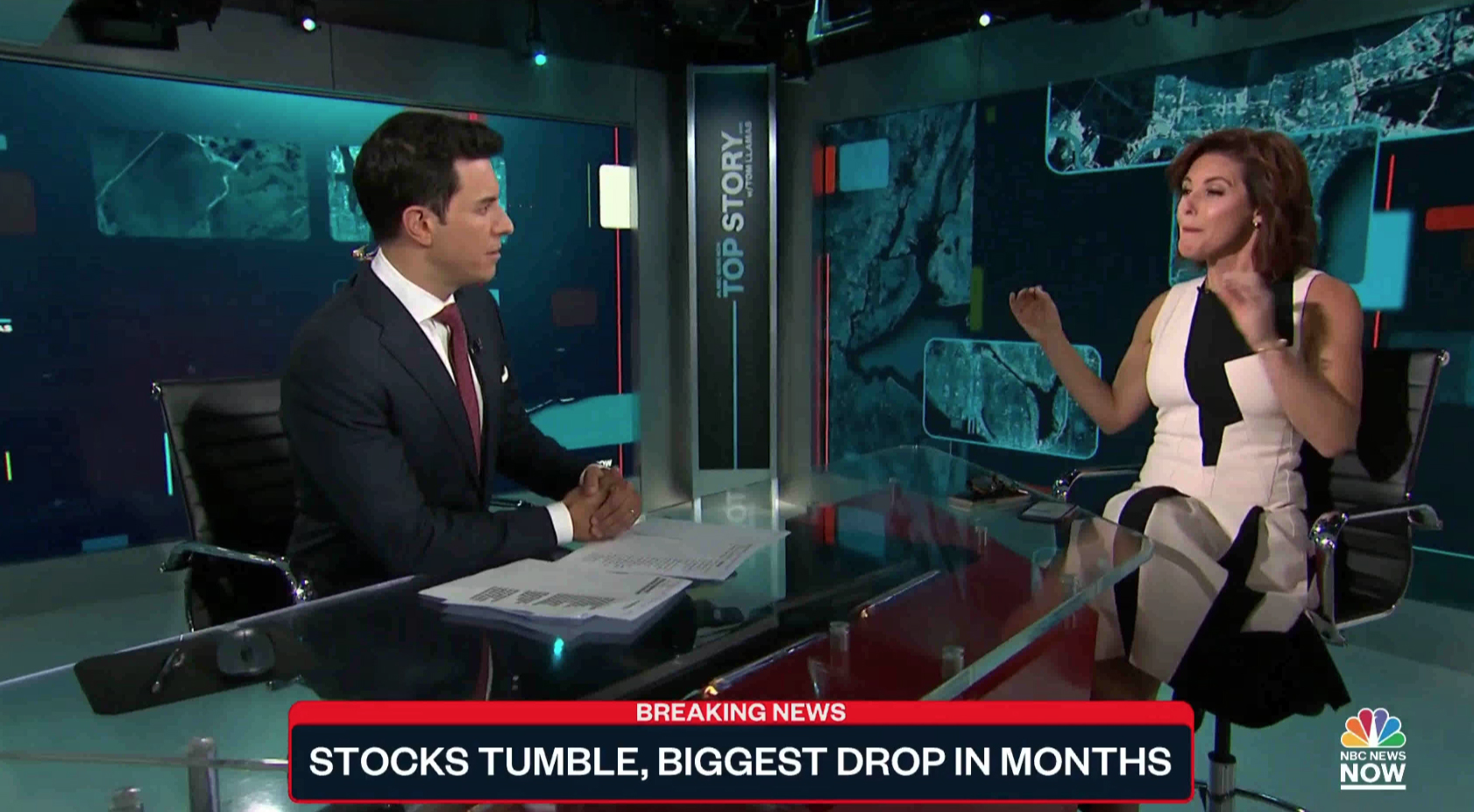