Networks pay tribute to behind the scenes teams with holiday credits 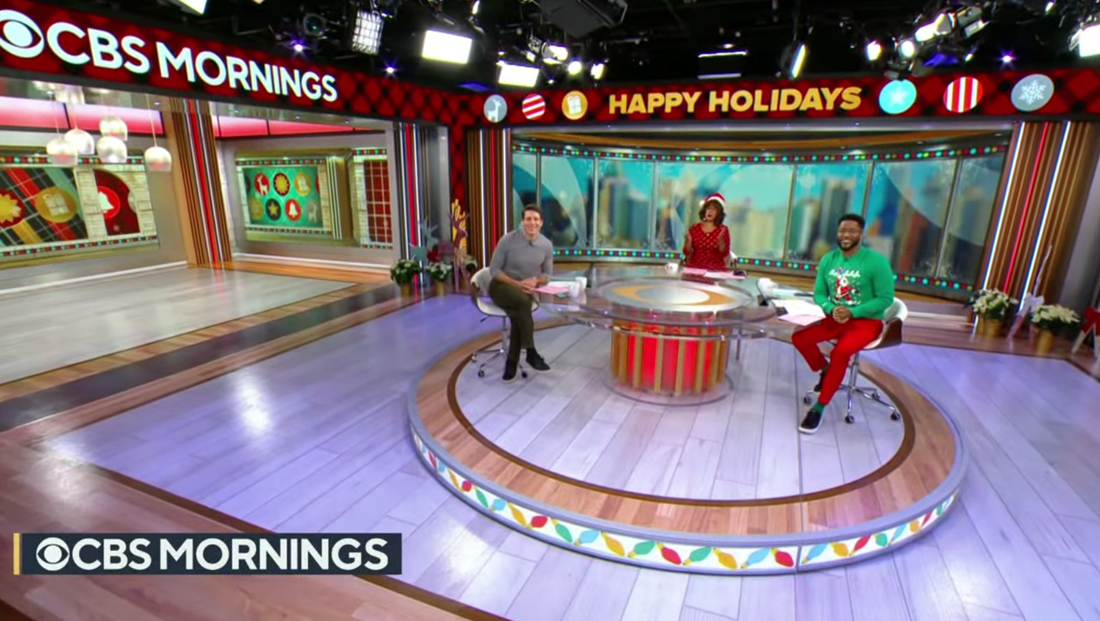 With Christmas Day falling on a Saturday, this placed Christmas Eve on Friday, Dec. 24, 2021 this year — and the major U.S. networks took differing approaches to this.

All three of the major U.S. networks traditionally pre-tape most of their morning show that airs Dec. 25, but this year that practice extended to Christmas Eve morning on two of them.

“CBS Mornings” was mostly on tape with all three of its primary anchors on duty, including Tony Dokoupil whose birthday, it was noted, happens to fall on Dec. 24.

The show originated from its normal home, Studio 1515 in Times Square, which featured an updated version of the city skyline on the video wall behind the anchors featuring red and green holiday lights as well as other festive graphics on the space’s remaining LED video walls and ribbons, including bold red buffalo-plaid columns and headers.

The show offered its “EyeOpener” segment featuring overnight developments near the top of the show and then tossed to a live news update from an anchor set up on the set used for the network’s early morning “Flash” update.

Like is common, CBS also aired a “full credits” segment with holiday music and photos contributed by the show’s team.

“CBS Mornings” sequence was significantly longer than other networks, likely because it chose to put only one name per screen, while other credit sequences used the scrolling credits style.

NBC’s “Today” was also on tape but also offered some live updates inserted into the recording and ran credits sequence as well.

Welker also appeared on “Today” Saturday, Dec. 25, 2021 (Christmas Day) but these segments were pre-taped in Studio 1A in New York.

Welker and co-anchor Peter Alexander tossed to Joe Fryer for part of the broadcast, who introduced stories that were likely produced after the pre-taped segments were done and therefore couldn’t be predicted.

It also aired a full credits “holiday card” at the end of the broadcast.

Linsey Davis anchored “ABC World News Tonight,” while Jamie Yuccas was in for Norah O’Donnell on “CBS Evening News” but neither broadcast aired full credits Christmas Eve, instead opting to air them on New Years’ Eve.