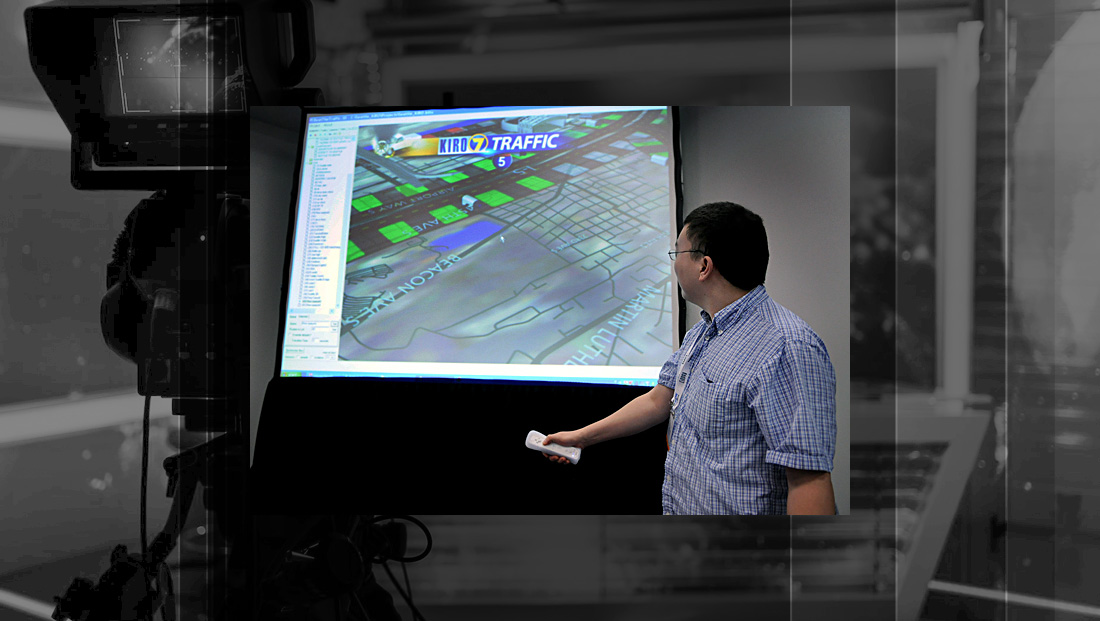 I’ll admit I was skeptical about how well Beat the Traffic’s Wii remote technology would work, especially considering my lack of eye-hand coordination and general video-gaming skills.

But, after a short introduction from the company’s CEO and founder Andrew Gueziec, I was zooming around a virtual map of Seattle with relative ease (and after just a few minutes of practice).

Beat the Traffic translates the user’s broad sweeping movements and hand rotations into smooth movement on the traffic system’s 3D renderings. The built-in vibration feature of the controller provides a subtle signal that you’ve hovered over a clickable data point with either a live camera flyout or detailed incident information.

The demo’s layout also mimicked a control key wall set up and I made a point to use test the Wii controller with my back to the meeting room’s large projection screen facing forward. Even without the benefit of monitors on either side or in front of me, the device was still easy to use.I’m confident that with a few more days of practice things would get easier and more natural.

One concern with the Wii as a controller is that some fast and dramatic movements seemed to require very broad gestures, making me wonder if it could be a bit distracting to viewers, though perhaps with some more find-tuning and practice this could be avoided.

It’s also interesting to consider viewers’ amusement if they realized their local traffic reporter is using a Wii device.

Beat the Traffic also emphasizes there’s a significant cost and convenience advantage to using a Wii control — something that’s available at practically every electronics store.

“I remember when our garage door opener style devices would fail and you’d have to call the company and pay a fortune to get a new one,” says company spokesperson Joseph J. Coscia, who used to work as a news director.

One does have to give the company credit for making use of an existing technology for a rather unique use. Gueziec says they considered other video game devices but ultimately felt the 3D navigation features of the Wii remote made it a winner.

For more information on Beat the Traffic view our earlier post on its new upgrades.