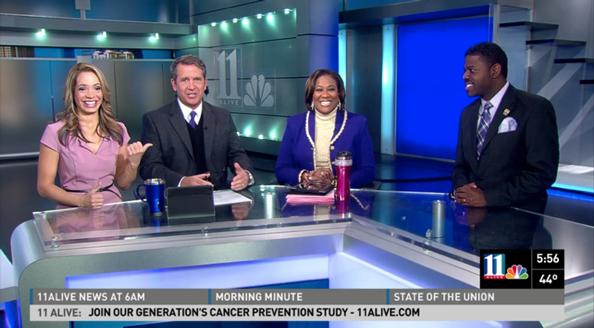 WXIA-TV, Atlanta’s Gannett owned NBC affiliate, debuted a new set on its noon newscasts Tuesday, after spending just over a month on a temporary set. The new set, which replaces the PDG/Jack Morton one installed in 2006, replaces warm wood tones and rich colors for sleek metallic surfaces and blurred plexi panels.

The set is stocked with backlit color changing plexi panels as well as numerous flat screen monitors, including a freestanding 3×4 monitor array.

Another common design element is the use of plexi panels placed in front of printed graphics that showcase the Atlanta skyline, which can be found in the header of the set, behind the anchor desk as well as other parts of the set. In some areas, the blurriness comes across as a bit extreme.

In addition to the new studio, WXIA-TV is also using the new Gannett graphics package, which NewscastStudio exclusively covered in January and were first seen at WTSP-TV in Tampa.