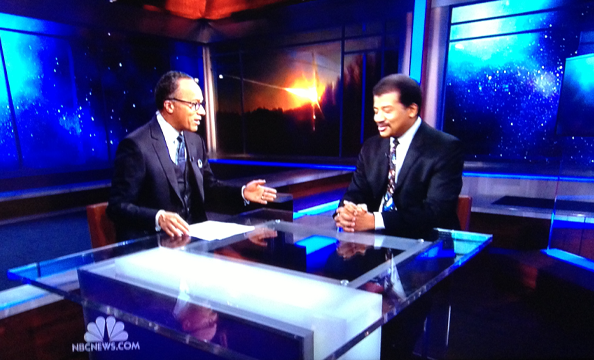 On Friday’s “NBC Nightly News,” the network was covering the Russian meteorite and opted to have substitute anchor Lester Holt interview Neil deGrasse Tyson, director of the Hayden Planetarium, from the “Rock Center” area of Studio 3B.

Instead of the usual New York City skylines, however, the set’s rear projection screens were showing dramatic images of stars, as well as a topical image from that day of the meteorite. Tyson, meanwhile, was seated in front of the set’s stairway with a flat screen panel placed somewhat awkwardly behind him, also showing star imagery. After the interview, Holt intro’d the next story, on the Carnival cruise ship, from the desk, with the background screen becoming a generic blue.

It’s interesting to see “Nightly News” making use of the “Rock Center” area, especially since the show often does in studio interviews and debriefings from the normal anchor desk, but it does add numerous possibilities for the broadcast.

The large rear projection screens offer up some intriguing storytelling opportunities, such as when Williams and Richard Engel used the screen in the old “Nightly News” studio to showcase a map of the Middle East.