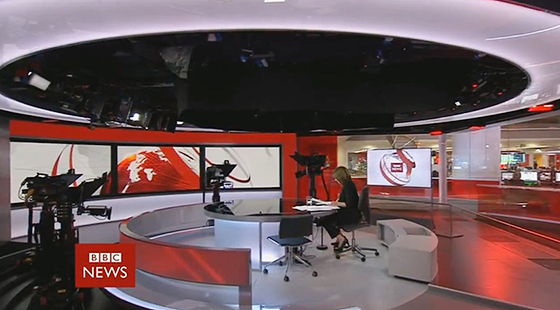 London based BDA Creative, who also worked with ITV News, designed the studio. Located in the heart of the newsroom, Studio E is the first studio in a long time to feature a real newsroom background for the BBC. Previously, BBC News used virtual “set extensions” that showed an idealized newsroom created in 3D.

The new studio background is dynamic and impressive, showing off Europe’s largest newsroom. The design matches the other new studios in Broadcasting House, emphasizing circles and minimal design. Backlit elements are used throughout the studio with robotic cameras that can rotate around the set.

A look around the new newsroom:

Studio E joins other studios at Broadcasting House fully online, including Studio B and Studio C. A full gallery of images is on SetStudio.