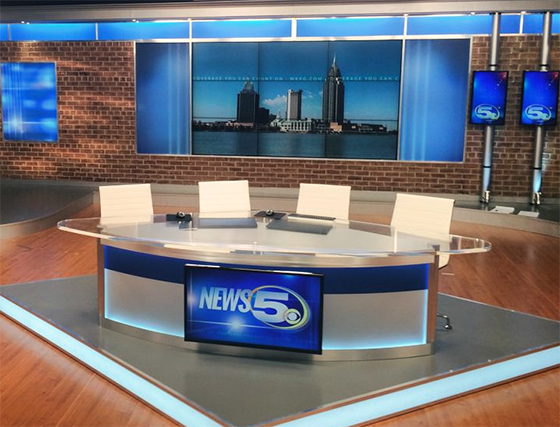 Designed by David Weller, the new studio mixes brick with backlit paneling and technology to create a modern loft feeling.

The brick walls were chosen to honor the Mobile, Alabama architecture, according to WKRG-TV.

A diamond shaped riser is camera center with a four person anchor desk. Behind this is the 3×3 monitor array and backlit graphic panels. To the left is a standup position with multiple vertical monitors. A weather center with a small presentation pod is located to the right of the anchor desk. The set also includes a floating header element, but it rarely shows up on-air.

For the budget the station was working with, the set looks great. It has some issues, such as large barrenness spans of bricks, but in most true shots this is not visible. The set could have also benefited from a bit more layering, separating some of the elements, instead of inlaying them all into the walls.

The station has posted a video of the sets construction, featuring an interview with designer Weller.