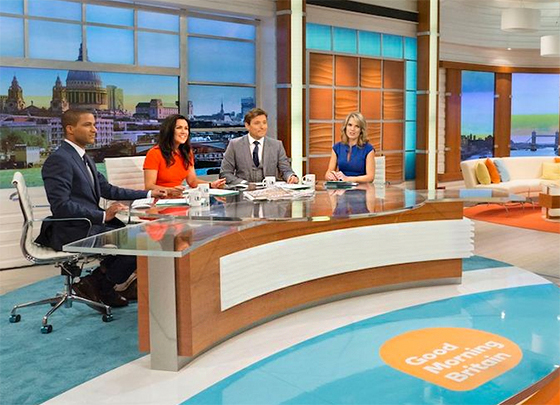 Replacing “Daybreak,” the new show has been Americanized with its presentation. Viewers could almost confuse the broadcast for that of “Today” or “Good Morning America.”

View a gallery of the new Set Design and Graphics

“GMB” is a throwback to the former ITV morning show that aired from 1983-1992, but the name is about the only connection the new version has with the past.

ITV has had a rocky road with morning programming, shuffling talent and programs often, so we’ll see if “Good Morning Britain” sticks. The shows opening theme begins with a regal four note signature and enters a driving beat for the opening tease.

The theme then turns into a large fanfare using the melodic signature.

Overall, the musical theme sounds like a “Today” knockoff. This isn’t a bad thing, but it’s clear it was heavily inspired.

The shows graphics are built around the logo. Curved lines radiate from the logo during the opening and various show elements. The shows open includes shots of sunrise over London with the logo and date overlaid.

The graphics are fresh, using orange, green and white as the primary colors with a modern sans serif font. The set mixes light and dark wood with metal elements and backlit paneling, creating an upscale loft vibe. Textured panels are mixed throughout the set, adding depth and a unique design element.

The set includes multiple “windows,” though the main “window” camera center contains a few too many bars and looks disjointed. To the right of the anchor desk is a large curved couch with three window monitors. A set of glass doors and some textured panels complete the area. It’s interesting to note the number of glass doors appearing on sets these days… Overall, the design sets a high bar for the show. The design has great depth, arrangement and color selection, making this one of the top sets so far this year.

The set does borrow inspiration from some other shows designs, but this packaging is unique to “Good Morning Britain” and looks great..

We just hope this set can last, given ITV’s breakfast turmoil.