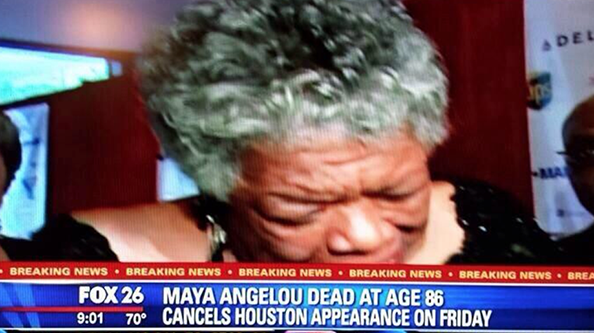 KRIV-TV, the Fox O&O in Houston, made a bit of a faux pas in a lower third reporting renowned poet and author Maya Angelou’s death.

After the first tier proclaimed Angelou’s death, the station followed it with a helpful second tier reading “Cancels Houston Appearance on Friday.”

Screen grabs of the lower third have been circulating online, including on Twitter where it gained significant traction and sparked some outrage at the station.

The error likely stemmed from the fact that Angelou had already canceled her Houston appearance scheduled for May 30 several days before her death due to health concerns, as the lower third shown below correctly states. As a side note, even the correct lower third is rather poorly worded — did Angelou cancel an appearance scheduled for Friday or was the cancellation notice made on Friday?