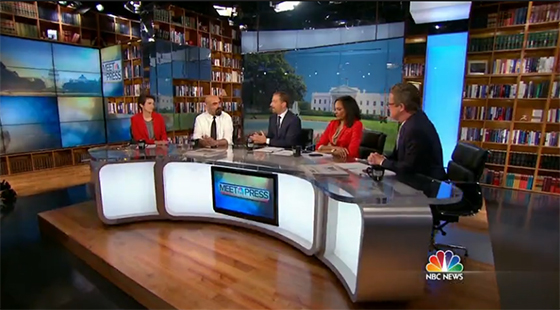 Chuck Todd took over NBC’s “Meet the Press” today, after a hurried exit by David Gregory. With so little time to truly prepare, NBC went with the same graphic look and mostly the same studio by Clickspring Design… except a new desk.

This marks the second time in a couple of months NBC has changed desks in the studio, first replacing the original desks with more intimate ones.

The new desk may look familiar, because it’s NBC’s portable desk, often used for on-location events such as Education Nation. Expect more changes to the studio in the coming weeks.

“As you can see, we’re making a few changes around here. As I like to say, we’re living in a house as we remodel it, so the program in this studio will continue to evolve over the coming months,” said Todd on the broadcast.

This setup is likely temporary, until a new (matching) desk can be fabricated. This changeover happened a bit quicker than expected, leaving production to have to pull together elements for the debut. The smaller interview table was kept, but now awkwardly floats in the front of the studio. An LED backlit panel had connected the two desk platforms until the update. Now, the desks disjointedly float around the studio.

We’ll see how it evolves.