‘Inside the NFL’ starts season with fresh look 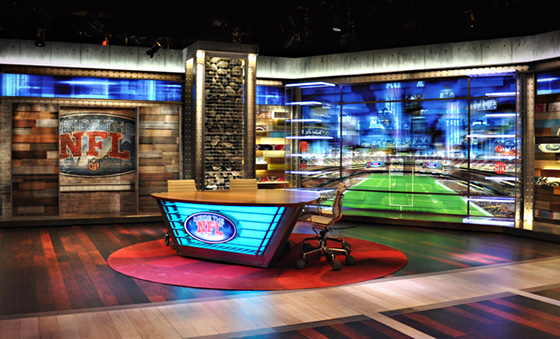 Showtime’s “Inside the NFL” kicked off its season with a new set from Jack Morton PDG.

The set design includes a mix of stonework, riveted columns and wood, creating an industrial vibe. Pops of color appear on the set via backlit graphic panels and the shows main desk.

View a full gallery of the set design

A large desk, an interview area and a pub-height table make up the sets three main areas. The interview area includes a faux fireplace with brickwork and more industrial elements.

It’s interesting to note the lack of technology on the set, which is similar to the previous set that debuted in during the 2010 season. This is likely due to the shows format, which focuses on heavy panel discussion amongst journalists and former player/coaches.

Included in the set are little references to Showtime, including a carpet with the networks logo. Similarly, NFL teams logos are sneakily worked in on some of the wood paneling, giving a reclaimed/throwback feeling.

Overall, the design is “manly” while still being warm. It has a throwback vibe, similar to other football sets debuting this season.

The set is one of many football sets launched this fall by Jack Morton PDG, including: NBC’s “Football Night in America” and ESPN’s football studio.