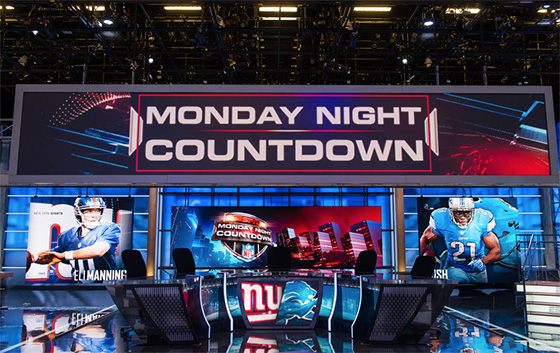 ESPN’s National Football League coverage will have a completely new look this season, thanks to a state-of-the-art 9,000 square foot NFL studio that will debut this week with the three-hour kickoff edition of ESPN’s “Sunday NFL Countdown” pregame show.

The first show in the new studio airs at 10 a.m. ET on Sunday, Sept. 7 – 35 years to the day of ESPN’s original network launch.

“For the first time, every NFL show on ESPN will have its own signature look and feel, which is so important with the variety of NFL programming available today,” said Seth Markman, senior coordinating producer, NFL studio shows. “The set is stunning and, in terms of functionality, it will enhance our presentation by allowing us to do so much more. We think fans are really going to like it.” In addition to “Sunday NFL Countdown,” it will be the new home for all other ESPN NFL studio programs – “NFL Insiders,” “NFL Live,” “NFL PrimeTime” and “Monday Night Countdown,” etc. – beginning Monday, Sept. 8.

The studio, which offers six different mini-set possibilities, plus additional standup areas, will give every show its own distinct look and feel. Previously, all of ESPN’s NFL shows shared the same area in Studio E in Digital Center 1, along with other non-NFL programs.