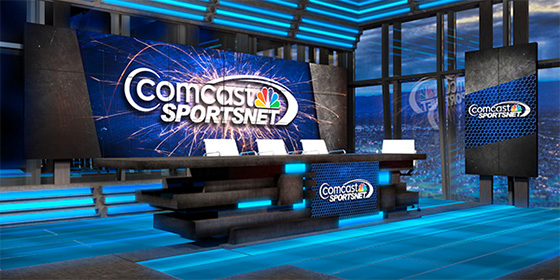 As the NFL season kickoffs, the San Francisco 49ers are opening up a new home by the bay.

One of the most technologically connected venues, Levi Stadium will also include a 1,000 square foot set for the 49ers and Comcast SportsNet Bay Area.

FX Design Group worked with the parties involved to develop a gridiron themed set that captures the feel of football.

“They really wanted a very modern, very versatile environment with a lot of technology,” said Stephen Ricker, a designer at FX. “Pretty much a few clicks of the mouse and a few button presses will completely change the studio. Aside from a few spots that have that kind of distressed-metal texture, just about every surface is video surface or a color-changing lit surface.”

Karen Hogan of Sports Video Group has the complete details.