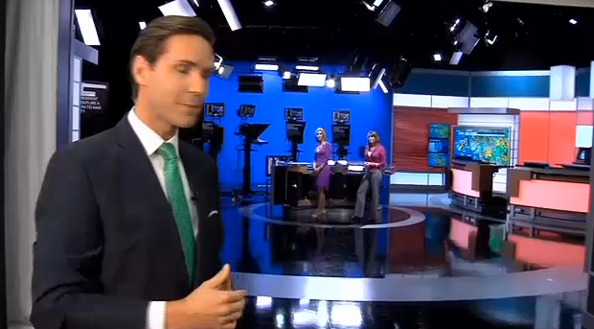 The set, designed by Devlin Design Group, is dominated by color changing LED walls, including sections that feature printed graphics with a wave-like texture. The view from “home base”

The standing anchor desk is situated in front of a large color changing wall that can be slid open to reveal the newsroom behind, which features a circular assignment desk directly in the middle, which is crowned with ceiling mounted flat screens.

The movable background, meanwhile, gives the set a bright, bold and clean backdrop that also includes a subtle rendition of the station’s logo and also allows the station to offer viewers a visual cue for breaking news, for example, but changing the set red. The new set also features a standup area that will be used mainly for sports. Situated in the corner of the studio, one large screen is backed by white vertical panels. An additional freestanding stack of three low profile flat panels gives the station an additional display surface. A working weather center boasts a horizontal strip of low profile video panels, a larger screen designed for use as an OTS that’s backed with a freestanding backlit panel and metal header. Two curved presentation pods are also included. The station showed off its new home in a segment during a newscast last week with anchor Kellie Burns. Unfortunately, the segment, which can be viewed below, is full of technical glitches such as what appears to be a missed toss shot, a mic that isn’t turned on in time and some echoing audio.

During the segment, Burns seems a bit flustered and excitedly proclaims there are “four monitors” next to her when the vertical stack she was referring to actually has three.

Burns also muddles through a tour of the weather station and informs viewers the station has “a dozen weather centers” (she probably means a dozen work stations) and even breathlessly says the station will “be able to bring you even more news coverage than we have before” — though she never elaborates how, exactly, it will do that. Burns also gives viewers a look at the studio’s “BAM” — but conveniently glosses over what, exactly those letters stand for (that would be “big ass monitor”).