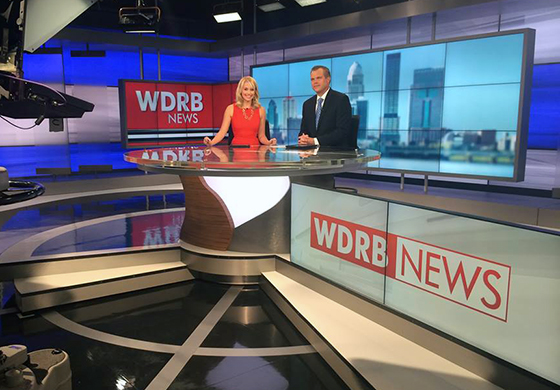 “Today at WDRB-TV, we walk into our own little version of Oz,” said Eric Crawford of WDRB-TV. “At 6 o’clock, not only will the station unveil a new kind of newscast in a traditionally competitive time slot we’ve not used for news before, it will do so on a new set unlike anything we’ve seen not only in Louisville, but this side of ESPN.”

Working with Devlin Design Group, WDRB-TV received a set that combines color changing graphic panels, large monitor walls and a unique anchor desk for a look that stands out in Kentucky.

“We’re not in Kansas, anymore. I’m not even sure we’re in Louisville. This is a network-quality look,” said Crawford. Technology wise, the set includes an 80 inch touchscreen and a 5×3 monitor array. Two zero-bezel monitors jut out from the anchor desk, creating visual interest and a creative opening shot.

The anchor desk features a combination of curvy wood and metal, with a large glass top. The set features metal and wood finishes throughout with a large metal footer and header connecting the scenery.

A large weather center is also present with two monitors and many computers for severe weather coverage. The set is just a small part of the changes underway at WDRB-TV, which includes increased staffing, new vehicles and an expanded building.

“When I got to WDRB back in 2012, I wondered if anyone else would try to do what we’re doing. Two years later, I wonder how long it will be until everyone is trying to do it,” said Crawford.